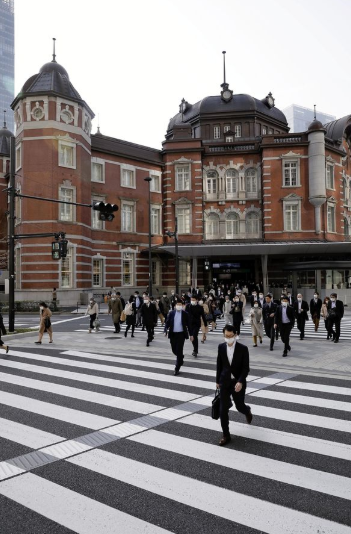 There were few commuters in front of JR Tokyo Station at 8:20 a.m. Wednesday in Chiyoda Ward, Tokyo. The Japan News/Asia News Network

TOKYO — Calls for people in Tokyo and other areas to refrain from going out began Wednesday — now with legal backing thanks to the state of emergency declared Tuesday to deal with a sharp rise in new coronavirus infections.

Many department stores and other private-sector facilities were closed and the streets of Tokyo’s business districts and shopping areas were quiet, thanks to a sharp drop in commuters and customers.

The emergency declaration based on a revised special measures law for dealing with new forms of influenza was published in Kanpo, the central government’s official publication, late Tuesday night.

An emergency has now been declared in Tokyo, Kanagawa, Saitama, Chiba, Osaka, Hyogo and Fukuoka prefectures.

Starting midnight Wednesday, the governments of Tokyo and other municipalities have requested that people refrain from unnecessary or non-urgent outings, along with other measures.

The declaration is for one month, until May 6.

East Japan Railway Co. and major private railways in the Tokyo area were operating on their usual schedules Wednesday.

Yet during rush hour, trains coming into busy stations like JR Tokyo and Shinjuku could be seen to have empty seats and crowds were noticeably thinner.

“There are fewer passengers than yesterday, maybe about one-fifth of normal,” said a company employee who uses Tokyo Station to commute from Mitaka in western Tokyo.

A 26-year-old woman from Saitama heading to her job in the Marunouchi district was at a loss for words. “Marunouchi with so few people, it’s like …,” she said.

The Shinjuku Expressway Bus Terminal, one of the largest in the country, usually has about 800 buses pass through per day. The Shibuya Ward terminal is down to about 650 buses per day and has reduced its hours. Only about 10 people were sitting in the roughly 200-seat waiting area on Wednesday morning.

One 19-year-old woman was heading back to her home in Yamanashi Prefecture because the start of classes at her university in Yokohama had been delayed. “It feels scary now that an emergency has been declared. I don’t plan to go out once I get back home,” she said.

Major department stores and shopping facilities in the Ginza and Shibuya districts of Tokyo are now closed. This includes Shibuya 109 and Shibuya Parco. Many restaurants, clothing shops and other retail stores had signs posted on their doors announcing temporary closures.

“The amount of people passing by is about one-third of normal. The number of customers since this whole new coronavirus thing started is down enough that I can count them,” said a person who works at a soba shop near Shibuya Station.

“I’ve heard that many companies have started having employees work from home starting today. With everyone’s cooperation, we can get out of this emergency situation in a month,” he said.