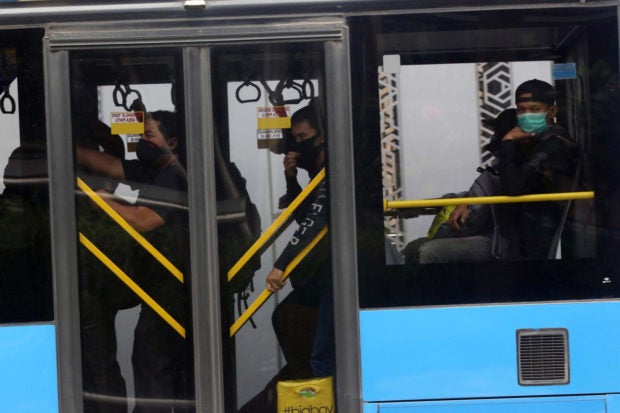 Cover up: Passengers wear face masks onboard a Transjakarta bus as it passes through Jl. MH Thamrin in Central Jakarta on Monday. The obligation for people to wear face masks while in public spaces, including in buses, is stipulated in a newly released gubernatorial instruction that aims to curb the spread of COVID-19. The Jakarta Post/Asia News Network/Dhoni Setiawan

JAKARTA — The Jakarta administration will tighten measures to restrict people’s movements after being granted permission by the central government to implement largescale social restrictions (PSBB) to curb the COVID-19 outbreak.

The Health Ministry granted the request early on Tuesday, shortly after Jakarta Governor Anies Baswedan slammed the ministry for being too bureaucratic in handling the outbreak, which has infected at least 1,369 people and killed 106 in Jakarta alone.

The governor told a press conference on Tuesday evening that the city had already implemented large-scale social distancing policies but they had now become legally binding to all residents following the ministry’s decision to approve Jakarta’s PSBB status.

Starting on Friday, gatherings of more than five people will be prohibited, Anies said, and public transportation services will limit passenger numbers to 50 percent of capacity and restrict their operational hours from 6 a.m. to 6 p.m.

The governor assured that private vehicles could still enter Jakarta, but a limit will be imposed on the number of passengers allowed in each vehicle.

“The Jakarta administration and the central government will give social aid to low-income people affected by the PSBB policies,” the governor said. “We are asking everyone to follow the rules […] We will not tolerate any activities that can cause infection.”

The new measures, Anies said, will be detailed in a special regulation to be issued on Wednesday.

According to Article 13 of Health Ministerial Decree No. 9/2020 on the PSBB guidelines, large-scale social restrictions consist of closing schools and offices, limiting religious gatherings, public facilities, social and cultural activities, and other matters related to defense and security, as well as transportation.

Once implemented, the policy will be effective during the incubation period and could be extended should the outbreak continue to spread.

Jakarta Police traffic division director Sr. Comr. Sambodo Purnomo said he was waiting for details on the restrictions from the city transportation agency prior to contributing to these efforts.

“We are still waiting for the details; types of vehicles, the limit on passengers,” he said.Calls are mounting for Anies to be tougher with large-scale social restrictions.

Saleh Daulay of the National Mandate Party (PAN) said the administration should also suspend travel to and from the city to limit people’s movements and that it should have a deterrent effect.

Willy Aditya of the NasDem Party said Anies should close down offices.

“Working from home must be mandatory for all offices in Jakarta. Companies that cannot make their employees work from home should obtain permission from the city administration. If there is a violation, the punishment should be clear,” he said.

“There should be coordinated and effective policies to curb the spread of COVID-19,” he said.

Banten Governor Wahidin Halim said his administration had also requested a PSBB status from the Health Ministry, agreeing that the policy should be implemented in Greater Jakarta.

“I propose that the PSBB status be implemented in Greater Jakarta as the cities have similar characteristics […] and they have people commuting [to and from Jakarta]. We are pushing cities or regencies in Banten to request a PSBB status and synchronize their policies with those of Jakarta,” he said following a video conference with Anies, West Java Governor Ridwan Kamil and Vice President Ma’ruf Amin.

He claimed that the three governors had agreed to have the PSBB implemented in Greater Jakarta. Bekasi, Depok and Bogor in West Java also plan on requesting PSBB status from the Health Ministry.

“The measures, although they don’t go as far as closing off transportation access, could entail restrictions on passenger numbers and tighter monitoring at terminals and tollgates,” Hermawan, who is also on the Indonesian Public Health Expert Association’s (IAKMI) COVID-19 task force, said.

He argued that greater social restrictions would make more of a difference with regard to the closure of workplaces as tighter law enforcement would follow any violations.

“Despite the [governor’s] previous appeal, many companies are still open. With the implementation of these large-scale social restrictions, the city administration can issue warning letters and carry out a phased monitoring to enforce the rules.”

The National Police have said they will charge anyone caught violating PSBB measures as stipulated under Article 93 the 2018 Health Quarantine Law.