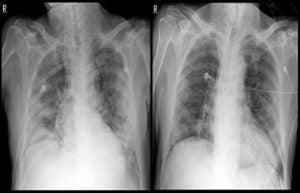 Image on the left shows 71-year-old virus patient’s chest X-ray before plasma therapy at Severance Hospital in Shinchon and the right was taken after undergoing treament. (Severance Hospital) via The Korea Herald

SEOUL — Two patients infected with COVID-19 have recovered after plasma treatments, in the first such cases here, a Seoul-based hospital said Tuesday.

Doctors at Severance Hospital in Shincheon had plasma of virus survivors injected into the two patients, who were in critical condition, and both have since been declared free of the virus. No side effects have been reported, the hospital said.

“Both patients showed improvements in inflammation and the number of lymphocytes, among others, after receiving plasma injection and treatment with steroids,” said professor Choi Jun-young, who is also the chief of the Division of Infectious Diseases at Severance Hospital.

“Plasma therapy has its side effects and there has yet to be a large-scale clinical trial, so it lacks scientific evidence. But it can be an alternative, used jointly with steroid treatment, for critical virus patients who aren’t seeing results from antiviral treatments.”

One of the patients, a 71-year-old surnamed Kim, received 500 milliliters of plasma in 12-hour intervals twice, along with a steroid treatment, from a male survivor who had been declared free from the virus more than two weeks prior.

The patient was transferred to Severance Hospital after failing to make progress with anti-malaria and AIDS drugs elsewhere.

According to hospital officials, Kim showed symptoms of pneumonia in both the lungs in an X-ray test and had trouble breathing when he first arrived. Kim’s C-reactive protein, which shows systemic inflammation, had also risen to more than 20 times normal levels.

The other patient, 67, also made a full recovery and has now returned home.

A guideline on plasma therapy is to be rolled out in the coming days, health authorities said.

“We are to apply the guideline crafted during MERS (Middle East respiratory syndrome). But in terms of the effectiveness of the treatment, there needs to be more analysis of clinical trials,” KCDC Deputy Director Kwon Jun-wook said.