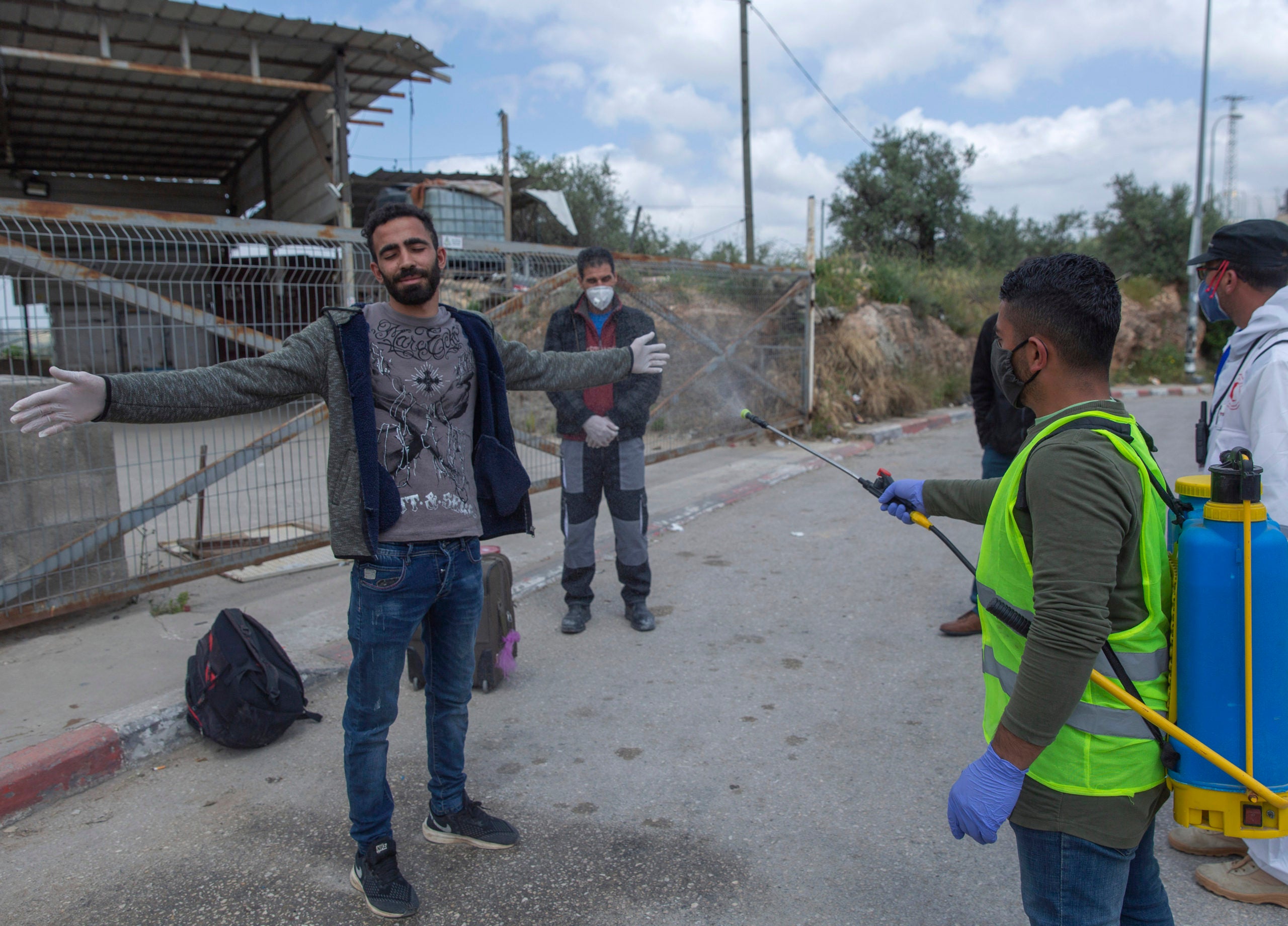 In this Tuesday, April 7, 2020 photo, a paramedic from the Palestinian Ministry of Health disinfects Palestinian laborers to help contain the coronavirus, as they exit an Israeli army checkpoint after returning from work in Israel, near the West Bank village of Nilin, west of Ramallah. The virus outbreak poses a major dilemma for tens of thousands of Palestinian laborers working inside Israel who can no longer freely travel back and forth. (AP Photo/Nasser Nasser)

RAMALLAH, West Bank — At the construction site in Tel Aviv, Jamal Salman and the other Palestinian workers wore gloves and masks, and their employer provided apartments for them to stay overnight.

But his wife, alarmed by the news about the coronavirus outbreak in Israel, called him every night from the West Bank, begging him to come home. He came back early this week.

Now he sits alone in his basement all day, quarantined from his wife and five children and wondering how he’ll make ends meet. In Tel Aviv he earned $1,500 a month, enough to support his family. Now he’s unemployed.

“Coronavirus is like an all-out war,” he said. “Everyone is suffering.”

The coronavirus outbreak poses a dilemma for tens of thousands of Palestinian laborers working inside Israel who are now barred from traveling back and forth. They can stay in Israel, where wages are much higher but the outbreak is more severe, or they can return home to quarantine and unemployment in the West Bank.

Authorities on both sides are wrestling with similar trade-offs as they confront a virus that blithely ignores the barriers erected over the course of the decades-old conflict.

Both Israel and the Palestinian Authority imposed sweeping lockdowns in mid-March, largely sealing off the occupied West Bank and heavily restricting travel within the territory.

But the laborers were allowed to remain in Israel, where many work in construction and agriculture — sectors deemed essential to the economy.

Palestinians can earn much higher wages in Israel than in the West Bank, where economic development has been hindered by more than a half-century of Israeli military rule. Many support extended families, and their income is vital to the local economy.

Israel and the Palestinian Authority initially agreed that the workers could remain in Israel for up to two months as long as they didn’t travel back and forth.

It was left to Israeli employers to provide living facilities for the workers, some of whom were largely left to fend for themselves. The Associated Press spoke to workers last month who left their construction site after several days of living in close quarters, with little if any protective equipment.

Many have chosen to go back to the West Bank, including thousands who returned ahead of the Passover holiday in Israel, when work grinds to a halt. Palestinian Labor Minister Nasri Abu Jaish told local media that 8,000 workers came back on Tuesday alone.

Their return to the West Bank poses a risk, both to public health and to the Palestinian economy.

The Palestinian Authority, which has reported around 250 cases and one fatality, says 73% of the infections have been linked to workers returning from Israel, which is battling a much larger outbreak. Israel has more than 9,200 confirmed cases, including at least 65 fatalities.

Last week, Israel sent around 250 Palestinian workers back to the West Bank after a virus outbreak at a chicken slaughterhouse near Jerusalem, where nine workers tested positive.

“With the borders closed, and no tourists or travelers, the only remaining source for coronavirus infections is Israel, where the outbreak is huge,” said Dr. Kamal al-Shakhra, an official in the Palestinian Health Ministry.

The Palestinian Authority is stopping workers after they cross through Israeli checkpoints and taking their temperatures. Those with fever or other symptoms are taken to hospitals while the rest are ordered into 14-day home quarantine.

All workers are barred from returning to Israel, and security forces posted at the entrances to towns and villages are confiscating work permits.

“We cannot test all the workers returning from Israel because we have limited capabilities,” said Dr. Ali Abed Rabu, another Health Ministry official. Labs in Ramallah and Bethlehem can only process around 600 tests per day, he said.

Gerald Rockenschaub, the head of the World Health Organization for the Palestinian territories, praised the Palestinian Authority’s response to the pandemic. But he acknowledged that screening and quarantining the returning workers was “easier said than done,” especially since many are unregistered.

A major outbreak in the West Bank would overwhelm the local health system. West Bank hospitals have around 213 intensive care unit beds with ventilators, according to the WHO.

That’s for a population of around 2.5 million.

The situation in Gaza, which has been under an Israeli and Egyptian blockade since the Palestinian militant group Hamas seized power there in 2007, is even more dire.

The virus causes mild to moderate symptoms in most patients, who recover within a few weeks. But it is highly contagious and can be spread by those who appear healthy. It can cause severe illness and death in some patients, particularly the sick and elderly.

Mohammed Falah, a 24-year-old day laborer from the West Bank, returned from Israel on Tuesday after working on a construction site in Tel Aviv for the last three weeks.

“If I had more work, I would have stayed,” said Falah, who is engaged and hopes to get married this summer. He makes around $70 a day in Israel, twice the going rate in the West Bank.

“I’m building a home myself. I cannot afford to stay in with no income,” he said.

After he passed through the Israeli checkpoint, Palestinian medics sprayed him down with disinfectant from head to toe. “They even disinfected my shoes,” he said.

After taking his temperature and finding no sign of fever, they ordered him to go into home quarantine for 14 days.

“I will definitely follow the instructions,” he said. “I have parents and brothers and sisters, and I want to protect them.”