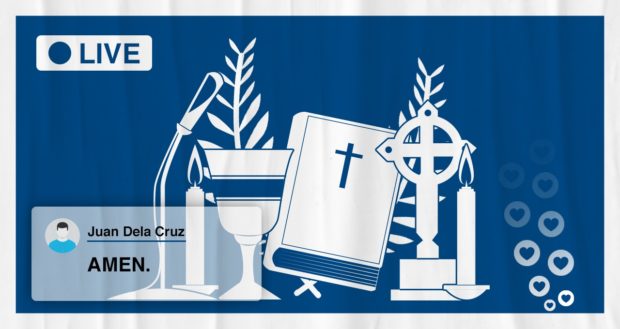 MANILA, Philippines — During Holy Week, the traditional “pabasa” and Visita Iglesia are usually done in churches. In fact, many Filipinos even travel miles to visit different churches in their respective areas and even neighboring provinces.

But because of the threat of the coronavirus disease, which prompted the government to impose a quarantine in the entire Luzon region, people are forced to stay home and instead utilize technology and the online platform to continue observe the religious event.

This is the new normal, at least for now, accoring to Ephraim Gaytos, an assistant coordinator for a parish in Quezon City.

“Ang laki talaga ng difference (There is a huge difference),” Gaytos told INQUIRER.NET over the phone as he described this year’s celebration of Holy Week with the quarantine in place.

“Even before the Holy Week and even before the enhanced community quarantine, we have activities outside our parish such as Visita Iglesia, but since the Luzon-wide lockdown was implemented, all of those events were moved to another date or canceled,” he said.

Gaytos has learned the value of religiosity from his parents at an early age. Today, he serves as the assistant coordinator for the St. Joseph the Worker Parish in Quezon City under the Diocese of Cubao.

As an assistant coordinator, Gaytos is tasked to coordinate with the lectors and commentators of their ministry for Eucharistic readings. Outside the church, Gaytos also joins catechetical missions in elementary and secondary schools.

“I got it from my parents, particularly my mother. She is the religious one. What happened was my mother would invite us to attend the mass or invite us to join an engagement in the church,” Gaytos said.

“In our family, instead of resting or taking a vacation, Holy Week is a jampacked time mostly because every day of the week—from Holy Monday to Easter Sunday—our parish has activities, even our sister chapels,” he added.

In the previous years, several activities are lined up in their community to celebrate Holy Week.

This includes the Station of the Cross or the 14-step Catholic devotion commemorating Jesus Christ’s last day on Earth as a man.

Gaytos said their community usually celebrates this on Holy Monday where a group of people move around the community from one station to another until they reach the 14th station. Each station is sponsored by one household.

Another prominent event during the Holy Week is the reenactment of the Passion of the Christ usually done by a group of actors performing around their community.

Visita Iglesia, where Filipinos visit several churches to pray, is also another tradition during the Holy Week.

However, this year, mass gatherings in their community in celebration of Holy Week were canceled in accordance to government measures in response to the coronavirus pandemic.

“Our activities really happen outside the church so there is a huge difference in our observance of Holy Week this year because even if we want to go to church, we can’t because it’s an act of mass gathering,” Gaytos said.

“Even the churches or parish that we would go to are locked,” he added.

The pandemic, however, did not stop them from still observing the Holy Week celebration.

Gaytos said that their parish had set guidelines on the celebration of Holy Week even before the quarantine was imposed—with social distancing and other factors in consideration.

“The set-up this year is very tricky. But it is good that our parish did not come short of measures because even before there was a quarantine, there is already a coordination between the parish and the communities,” Gaytos said.

“They were setting guidelines for every parishioner which include ways on observing the Holy Week at home, but of course it’s different that what they were expecting,” he explained.

For instance, the parish has offered a virtual “pabasa” that members of the community can access online.

Gaytos said a small group of people—who are wearing their face masks and are seated away from each other to observe social distancing—are conducting the “pabasa” in the church. This is then streamed online for members of the community.

Families can also hold their own “pabasa” inside their homes.

“Instead of going to church or in our parish, we would instead have our own setup inside our home,” Gaytos said.

“Since we have a book on ‘pasyon,’ we started around six in the morning and ended around 9 p.m.,” he added.

“Every household in our compound has a certain station. Instead of going outside the community to roam around, since it is not safe, we would just hold it inside our compound,” Gaytos said.

Visita Iglesia will also be done virtually this year through the aid of the Catholic Bishops’ Conference of the Philippines (CBCP), Gaytos said.

He said that the CBCP offers a virtual Visita Iglesia on its website wherein the public can virtually visit several churches inside and outside Metro Manila.

Regardless of religion, Gaytos believes that Filipinos’ strong faith remains despite the pandemic that continues to threaten the country.

“The religiosity of Filipinos is faith-based. We have strong faith that despite all that is happening right now, there is someone we can lean on. We have someone to believe in. We have faith on a one particular God,” Gaytos said.

“Even if you are not a Catholic, whatever religion you belong in. That’s how strong our faith is. That is how strong our trust and faith is on what we believe in,” he added.

At the end of the day, Gaytos believes that the pandemic will soon end.