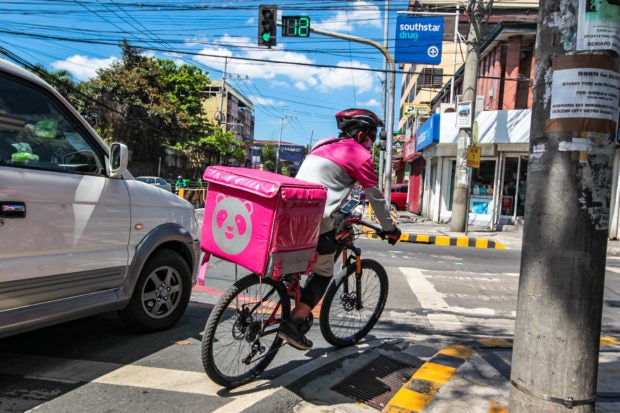 AT YOUR SERVICE A courier in Quezon City on his way to deliver food amid a lockdown. (Photo by LEO M. SABANGAN II / Philippine Daily Inquirer)

MANILA, Philippines — Not all heroes wear capes and fly. Some stay indoors, bailing out food delivery guys who get duped by unscrupulous customers.

They call themselves “Order Heroes”—a sort of Avengers team of 220,000 netizens rescuing delivery guys from botched no-show orders. They’ve assembled themselves organically on Facebook since March 29, or midway into the monthlong lockdown imposed on the entire island of Luzon to contain the spread of the new coronavirus.

The government has suspended public transportation but allowed food and courier services like GrabFood/Express, Angkas Padala, Lalamove/LalaFood, and FoodPanda to help quarantined households get a hold of basic necessities without having to leave their homes.

But apparently, even a global pandemic can’t stop mean-spirited customers from duping couriers like Ron. On April 2, he took an order for chicken and pasta worth P420 from a fast-food restaurant in Pasay City, only to get stood up by the customer.

“I’ve arrived at your doorstep,” he messaged the customer, which he posted on the Order Heroes page. “Please get it from me, I have another booking request to attend to.”

When it became clear he’d been canceled on, he posted both the exchange and a photo of the food on the page.

“He was in Pasay, and I lived in Quezon City, so obviously it wouldn’t be ideal for him to bring the food all the way here,” Galicia said. “It was hard enough being under the sun and lining up for the food. So I told him I would just deposit the amount in his bank account so he can eat the food instead.”

Ron at first insisted that she get the order, but “I really didn’t want to burden him even more after that experience with the original customer. I told him to give it to his family instead,” Galicia said.

From their own pockets

Fake customers have long plagued service apps like Grab, especially when transactions are cash-on-delivery (meaning, paid upon arrival). Couriers usually pay for the food out of their own pockets, hoping that the customer on the other end won’t dupe them out of the deal.

But it seems especially more sinister to prey on couriers now, when even just leaving the house means risking contracting the lethal coronavirus just so they can bring money home to their families, said Mary Ann Ortiz, the creator of the group.

“The time, the effort it takes to accept orders at a time when just going out could mean serious consequences—these are dire matters. And yet some people still find the time to deceive delivery guys by canceling or not showing up,” she said. “That can’t be right.”

Ortiz and nine other people run Order Heroes, which has since rescued around 10 couriers as of this writing. The page began from a viral photo of a GrabFood courier crying at the gate of his customer’s house, forced to eat the food he had paid for.

That courier, “Kuya Yenyen,” struck a chord with Ortiz. Thankfully, several people managed to trace and help him a day before Order Heroes was formed. Yenyen became a symbol for the group.

Not all canceled orders were deliberate, Ortiz pointed out. Some were caused by an app glitch that disconnected the courier from the customer; others by a wrong pin. But far too many were simply no-shows.

Ortiz and the other moderators’ main job is to vet whether a courier’s cry for help is legitimate. And there are ways to check that independently, she said.

For one, the receipt on the app should show either Grab or the name of the customer itself as the intended recipient of the order. If it’s the courier’s name that appears on the invoice, she said, “then that’s automatically a red flag.” Another is whether the exchanges between the supposed customer was via GrabChat (the internal messaging application on Grab) or text messages.

That was how they were able to catch one courier asking for help from the group on April 1. He claimed to have been played a nasty April Fools’ joke by a customer, who supposedly texted him, “Bahala ka diyan, kainin mo yang inorder mo! (It’s yours. Eat it yourself!)”

It was a particularly cruel exchange, Ortiz recalled, so they even boosted the signal of that courier’s call. But one of their moderators—an actual Grab courier—flagged him on two things: he had no receipt, and the messages were carried out via text, not GrabChat. That post had since been taken down.

“We really acted fast. We even alerted everyone who commented on the post,” Ortiz said. “We blocked every possible means of that [courier] profiting off Order Heroes.”

Overall, however, the group has done spectacularly well in linking couriers with willing customers. This even prompted Grab and FoodPanda to issue separate statements thanking the group indirectly for “rescuing” their couriers.

On Grab’s part, it assured its couriers of a reimbursement option in case of no-show customers. “Rest assured that there are corresponding penalties for [these] customers as well,” Grab said.

For Ortiz, the goal is not to keep saving couriers from their misery but to prompt delivery apps to protect their own, “by changing the system into something where their [couriers] are not compromised.”

“Until there is no significant move or change from the apps themselves, I think we’ll keep this group up and running,” she said. “We want to make a difference for the welfare of [these couriers].”