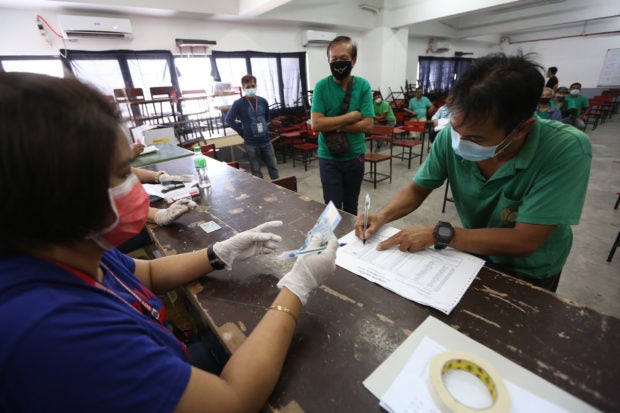 SUBSIDY Tricycle, jeepney and pedicab drivers observe social distancing as they line up on Friday, April 3, to receive the first half of P8,000 in financial assistance from the Taguig City government. (Photo by NIÑO JESUS ORBETA / Philippine Daily Inquirer)

Two out of every five target beneficiaries of the government’s cash subsidy program may not get financial aid if the Department of Social Welfare and Development (DSWD) does not update its database on families that need the assistance, Sen. Panfilo Lacson said on Monday.

“The gap averaged at least 40 percent nationwide,’’ Lacson said. “A bottom-up approach should be adopted instead of a top-down method, subject, of course, to validation.”

Amid the pandemic and the ensuing restrictions that shut down businesses and caused many people to lose income, Congress has pegged at 18 million the number of households nationwide that are each entitled monthly to between P5,000 and P8,000 for two months.

Many local governments are against the DSWD’s “quota system” that sets a fixed amount for every town and city from the P200-billion Social Amelioration Program (SAP), claiming that the number of target beneficiaries is far smaller than those who are qualified to receive the cash aid.

Social Welfare Secretary Rolando Bautista on Monday said the number of “indicative target beneficiaries,” the poorest and most at-risk, was derived from projections based on Department of Finance (DoF) data from the 2015 census.

“My advice is those who would not be included should be listed, and [the data] consolidated and validated properly by the local government units,” Bautista said in a radio interview.

He said the DoF, Department of Budget and Management and other concerned agencies were studying how to help the other affected families that were not on the list of target beneficiaries.

“How do you say who’s the ‘poorest of the poor?’ I mean that’s very subjective,” said Mayor Walfredo Dimaguila Jr. of Biñan City in Laguna province who, like many other local officials, asked national agencies to raise the cap on the number of beneficiaries.

Local government officials are now taking the heat from frustrated constituents, all under the impression that everyone was eligible.

Cavite Gov. Juanito Victor Remulla on Monday said that based on the criteria set by the national government, only 400,000 families out of the province’s 1 million households were eligible.

He appealed to President Duterte for the inclusion of the lower to middle-income earners.

“In the past three weeks, most have depleted their savings,” Remulla said in a letter to the President.

One of those who looked forward to government aid is Rea Cabanilla of Los Baños, Laguna, who depends solely on her husband’s remittances. But due to the pandemic, the company employing her husband in Singapore as a maintenance worker reduced work hours, sending him on furlough.

Her hopes were dashed when told she was not entitled to the cash subsidy. Families of overseas Filipino workers are automatically disqualified from the SAP.

“I don’t get remittances yet there are still bills to pay,” said Cabanilla, 62, who lives with her 78-year-old mother, a pensioner. Her mother, Jovita Bariring, said it was “unfair” because everyone was affected by the Luzon lockdown.

John Cerezo, Department of the Interior and Local Government (DILG) head in Laguna, said only 30 percent to 40 percent of a city or town’s population would fall within the SAP guidelines.

Local governments, burdened with the additional task of screening beneficiaries, have yet to finish printing the SAP forms and cards, forcing the national government to lift the April 3 deadline for them to disburse the cash aid.

In San Jose, Occidental Mindoro, officials in Barangay Bagong Sikat have resorted to “photocopying” the forms, which the DILG said should not be done as each form had a corresponding bar code in order to be processed.

“What would happen if we didn’t realize they’re photocopied? People would then be just waiting for nothing,” said one resident.

The 18 million households covered by the SAP include the 4.2 million beneficiaries of the Pantawid Pamilyang Pilipino Program (4Ps). The DSWD said all 4Ps cash cardholders had already received the emergency subsidy as of Sunday.

“Out of the total 4Ps beneficiaries, more than 3.6 million with cash cards nationwide were provided with the subsidy with a total budget allocation of more than P16.3 million,” the agency said in a statement.

For 4Ps beneficiaries who have yet to receive their cash cards, the funds have been downloaded to DSWD regional offices, which will facilitate the payout along with the local governments.

While aiming to complete the distribution before the scheduled end of the Luzon lockdown next week, the social welfare secretary said the Holy Week observance could lead to some delay.

Malacañang, meanwhile, is granting a “special risk allowance” to front-line public health workers for their contributions to the fight against the novel coronavirus.

Administrative Order 28, issued on April 6, allows a one-time allowance of up to 25 percent of the monthly basic salary of public health workers exposed to COVID-19 health risks and hardships.

It will take effect immediately upon publication in the Official Gazette or in a newspaper of general circulation.