WASHINGTON  — President Donald Trump on Saturday returned to the idea of opening up the country’s economy as as soon as possible, even as he said the United States was heading into what could be its “toughest” weeks as coronavirus cases swell nationwide. 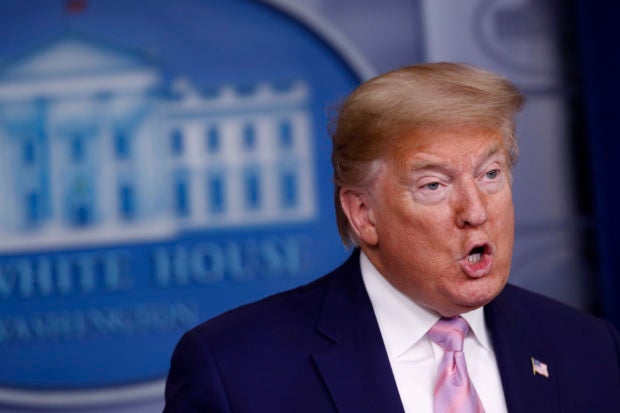 “There will be a lot of death, unfortunately. There will be death,” Trump said in a somber start to his daily briefing on the pandemic.

The president initially had suggested the country could reopen by Easter but pulled back seeing projections of a staggering death toll even if restrictive measures remain in place.

But just days after extending tough national guidelines through the end of April, staring down historic levels of unemployment and economic standstill, he was talking with leaders of professional sports leagues about filling arenas again.

“This country was not designed to be closed,” he said. “The cure cannot be worse than the problem.”

Much of the country is under orders to stay home, including professional sports leagues that were among the first to clamp down in the pandemic.

Trump spoke with commissioners of the country’s sports leagues, telling them he hoped to get people back in seats as soon as possible.

“I want fans back in the arenas,” he said. “Whenever we’re ready, as soon as we can.”

The virus has decimated the sports world with the National Basketball Association and the National Hockey League suspending their seasons indefinitely and Major League Baseball postponing the start of its season. The NCAA basketball tournament was also canceled; so were college spring sports.

Top sports leaders participated in the call, including Roger Goodell of the National Football League and the NBA’s Adam Silver.

But health officials offered some hope that social distance measures were working. Fauci said he saw social distancing efforts as he went out for a walk in Washington, D.C., and saw people waiting six feet apart for restaurant take out.

“As sobering and a difficult as this is, what we are doing is making a difference,” Fauci said.

Trump suggested that some states were asking for more medical supplies than they really needed. He said the goal was to stay several days ahead of critical medical needs in each state.

“The fears of the shortages have led to inflated requests,” he said.

Louisiana officials have said New Orleans is on track to run out of ventilators by next week. Gov. Andrew Cuomo, D-N.Y., whose state is at the epicenter of the national pandemic with over 113,700 confirmed cases as of Saturday morning, has pleaded for ventilators for days and lambasted what he has said is insufficient help from the federal government. New York is poised to get more than 1,100 ventilators from China and Oregon.

But the drug has major potential side effects, especially for the heart, and large studies are underway to see if it is safe and effective for treating COVID-19.

Trump suggested he may consider whether he should start taking the drug, even though he’s not been diagnosed. Some studies are testing whether hydroxychloroquine can help prevent infections in health care workers, but none has suggested that others, such as the president, should take it to prevent infection.

Before the briefing, House Speaker Nancy Pelosi, D-Calif., criticized the decision by Trump to nominate “one of his own lawyers,” as an inspector general overseeing federal aid during the coronavirus recovery.

Pelosi said the watchdog monitoring “this historic relief package for workers and families must be independent from politics.”

Trump nominated Brian Miller to the Treasury Department watchdog post. He currently serves as a special assistant to the president and as senior associate counsel in the White House.

Treasury Secretary Steven Mnuchin is overseeing the government package that aims to shovel $2.2 trillion into the U.S. economy over the next few weeks to try to cushion the free fall. The assistance includes $349 billion in loans for small businesses and a $500 billion corporate rescue fund.

The legislation signed by Trump last week created the special inspector general position as well as a panel appointed by Congress to monitor how the aid is deployed.

Pelosi said Trump is disregarding provisions in the act that would hold the administration accountable. She said a new House committee on the virus response would work to ensure “taxpayer dollars are being used wisely and efficiently to help workers and not to be exploited by profiteers and price-gougers.”