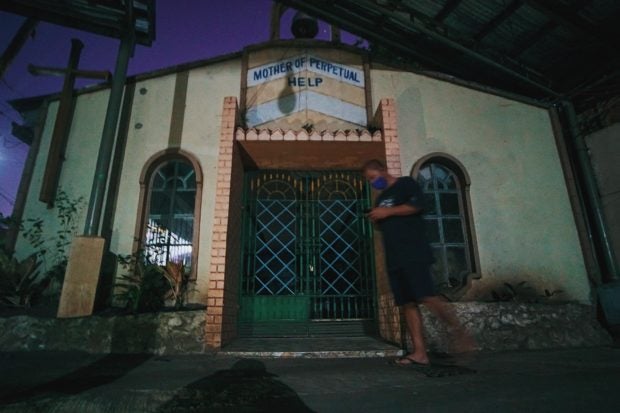 TEMPORARILY CLOSED The doors of every church and chapel in the entire Luzon like this one in Daraga, Albay province, were temporarily closed to the faithful as the enhanced community quarantine imposed over the island prohibited the gathering of large crowds, including during Holy Masses. This Holy Week, Lenten religious activities will be over the radio, TV and online as the Catholic Church continues to support the fight against the spread of the coronavirus pandemic. —GEORGE GIO BRONDIAL

Catholics can still take part in today’s Palm Sunday celebration even if they cannot be physically present in their parish churches, bishops and priests told their flock on Saturday.

They can watch Palm Sunday Masses aired live on television and radio, or streamed on social media.

But in Laguna and Marinduque, the traditional blessing of the “palaspas,” or palm fronds on Palm Sunday would push through but it would be the priests who would be going door-to-door to bring the “blessings” to the Catholic faithful.

In San Pablo City and Alaminos town in Laguna, priests have asked parishioners to hang outside their gates or windows a white cloth with a red table cloth on Palm Sunday. The faithful were also encouraged to light two candles at home.

“[The cloth] is simply to signify that a Catholic family lives there and that they want to have their palms blessed,” said Fr. Jerry Bitoon, rector at the Diocese of San Pablo. “It’s also a visible sign that Holy Week has commenced,” he said.

The palm blessing, scheduled after the morning Mass to be streamed online, will be done with priests standing from a safe distance to the houses.

“No need for people to go out,” Bitoon said.

He said the Church has prepared palm fronds to be distributed by village officials after the Palm Sunday blessing.

From Holy Thursday to Black Saturday, Maralit said priests might also go around the villages with the Holy Crucifix.

This, he said, will be carried out “with permission from the [local] government.”

In Lucban town of Quezon province, the faithful were encouraged to lay their palaspas before their social media screen monitor while they watched the Palm Sunday Mass online so they could receive the virtual blessing of their palm fronds.

Fr. Noel Cabungcal, parish priest of San Obispo de Tolosa Church in Lucban, admitted that the radical modification to the Catholic Lenten rites is hard to fathom. “[But] “it is a realization that we’re not in control of everything. In the end, what matters is only our faith and trust [to the Lord].”

“For the safety of the public, there will be no sprinkling of the blessed water at the church patio just like in the past tradition,” he explained in his public advisory.

However, the priest announced that the church will remain open in the morning for private prayers. But he reminded the parishioners to still observe social distancing while inside the church.

“And don’t bring along children inside the church,” he appealed.

In Albay, Holy Week Masses would also be carried out live through radio, television broadcast and other social media platforms, the Diocese of Legazpi announced Saturday.

Bishop Joel Baylon of the Diocese of Legazpi said the early Palm Sunday Mass signaling the start of the Holy Week would be aired at the local Veritas radio station and carried by a local cable network and through Facebook livestream.

Baylon urged parishioners to stay at home and listen and watch the scheduled Masses at their favorite local radio stations and online.

He also asked his parishioners to watch on television the Papal Liturgical Ceremonies for the Holy Week and Easter carried live on national and foreign television networks.

A tree branch will do

In Cagayan de Oro City, Archbishop Antonio Ledesma said that to celebrate Palm Sunday, any tree branch or leaves will do to symbolize Christiandom’s remembrance of Jesus’ entrance into Jerusalem that would lead to his eventual crucifixion.

For Palm Sunday’s Mass, Ledesma said the celebration of the liturgy would be “strictly without a congregation.” Only the priests, a choir of four members, readers, servers and technicians are allowed, in keeping with the government’s ban on mass gatherings and rule on social distancing.

Ledesma asked the Catholic faithful in his archdiocese to follow the Holy Week celebration over television, radio and social media, which would be aired at 7 a.m on Palm Sunday; at 6 p.m. on Holy Thursday; at 3 p.m. on Good Friday, 3 p.m.; and 6 p.m. on Holy Saturday.

Families were encouraged to prepare an altar with a crucifix and light a candle as their members follow the liturgy through various media.

Through the Mass that will be carried live over cable TV, radio and online on Sunday, Ledesma said the improvised palaspas would be blessed.

“After the family prayer, these palms could be attached to the gates or doors as a symbol of the family’s reliance on God’s protection to spare their home from the COVID-19 ‘angel of death,’” Ledesma added.

In Cebu City, priests have to learn how to navigate the virtual world as they officiate Masses and other religious activities through television, radio and social media platforms.

“Most of us (priests) have to learn to navigate through social media and internet. We asked the help of the youth in Churches to help us. Little by little, we learned new things using the internet and helped us widen our connection,” said Msgr. Ruben Labajo, the vicar general of the Cebu Archdiocese.

Priests across this overwhelmingly Catholic island, he said, were encouraged to look for alternative ways to minister to their flocks.

True enough, many priests were turning to the virtual world to bring people closer to God.

“We maximize multimedia production to disseminate messages from the Church. [In fact], we’re creating a video of the archbishop (Jose Palma) offering his support and message to our patients, our front-liners and we’re hoping now that these videos will be able to reach them,” he said.

While COVID-19 has left churches empty, Labajo said this could also be a time to emphasize the importance of the “domestic Church,” which is the family. As a domestic Church, family members can pray together at home.

“This does not mean the actual Church is disconnected. We’re still here. In Church’s history, there were a number of dark ages. But God does not allow darkness to reign forever. That is why amid the darkness, light comes out,” Labajo said. —REPORTS FROM MARICAR CINCO, RYAN D. ROSAURO, JIGGER J. JERUSALEM, ADOR VINCENT MAYOL, JOEY GABIETA, CARLA GOMEZ, DELFIN MALLARI JR., MAR S. ARGUELLES, AND MA. APRIL MIER-MANJARES