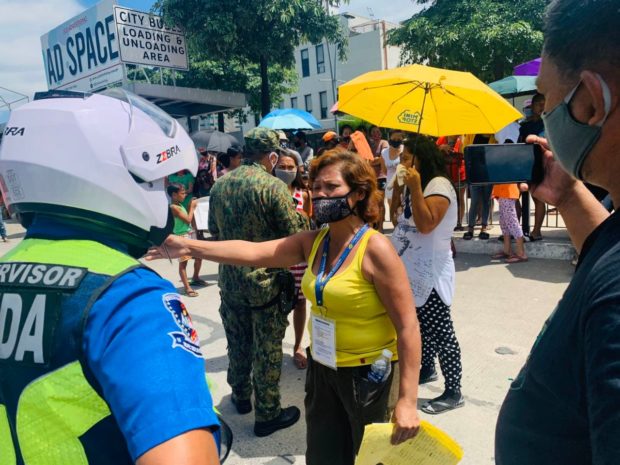 Members of the Samahan Ng Magkakapitbahay ng Barangay San Roque staged a protest along Edsa in Barangay Bagong Pag-Asa in Quezon City to demand food assistance from the government in the midst of the enhanced community quarantine. /QCPD PIO

MANILA, Philippines — The family of Senator Francis Pangilinan – as initiated by his daughter Frankie – has offered to pay the bail of the 21 Quezon City residents, who were arrested Wednesday after protesting for food and other assistance amid the Luzon-wide quarantine due to COVID-19.

The 21 San Roque residents who were arrested for protesting lack of food face multiple charges and must pay up to P15,000 EACH for bail according to their lawyer. Wala na nga silang makain, pagbabayarin pa ng P15,000 each. Walang awa sa mahihirap. #TulongHindiKulong

Frankie, daughter of Pangilinan and Megastar Sharon Cuneta, took notice of Reyes’ tweet and said that she would sponsor one of the arrested protesters.

“I’ll sponsor one. Please give the details,” Frankie said.

i’ll sponsor one. please give the details. https://t.co/R5C8Uqzqzo

Later, in a reply to her own tweet, “And my parents would like to cover the other twenty,” she added.

and my parents would like to cover the other twenty.

Interior Secretary Eduardo Año said Thursday said that the government will show “no mercy” to the protesters as they held an illegal assembly during a national health emergency.

“Everyone should cooperate. We are in a crisis and they are exploiting the situation,” Año said in a phone interview with the Inquirer, also claiming that a left-leaning group was trying to take advantage of the crisis.