MANILA, Philippines — Senator Leila de Lima is urging the National Bureau of Investigation (NBI) to drop the order to summon Pasig City Mayor Vico Sotto for allegedly violating the Bayanihan to Heal as One Act .

“NBI sounds pathetic in trying to explain their action in requiring Pasig City Mayor Vico Sotto to explain an alleged violation. NBI is defending an indefensible position,” the former Justice Secretary said in a dispatch from Camp Crame Thursday.

“Pilit na pilit. Ano ba yan, NBI? (This is way too forced. What happened, NBI?) For the sake of its institutional integrity, NBI should drop this case,” de Lima added.

De Lima said the uproar from netizens is justified, noting that Sotto’s defense that Pasig’s tricycle operations have already been stopped days before President Duterte signed the law on March 24.

“Quite justified is the indignation from many netizens. There is no case here. Didn’t the mayor promptly comply when the national authorities put their foot down on the issue, re: tricycles?” the senator stressed. “Mantakin ninyo: Pagpaliwanagin ba naman si Mayor Vico sa paglabag sa batas na hindi pa naman noon ipinatutupad?”

(Think about this: Mayor Vico is being ordered to explain his side for violating a law that has not been implemented yet at the time?)

NBI Deputy Director Ferdinand Lavin earlier said they sent the “invitation letter” to Sotto’s office to allow the latter to explain his side on why he should not be charged for violating the said law.

In the said letter, the NBI said the mayor violated the law by allowing the “continuous tricycle operations” in the city despite the ban on public transport during the quarantine period imposed by the national government.

In coming to his own defense, Sotto said the city government has fully complied with all directives of the said law, and that “it is not illegal to give opinions.” 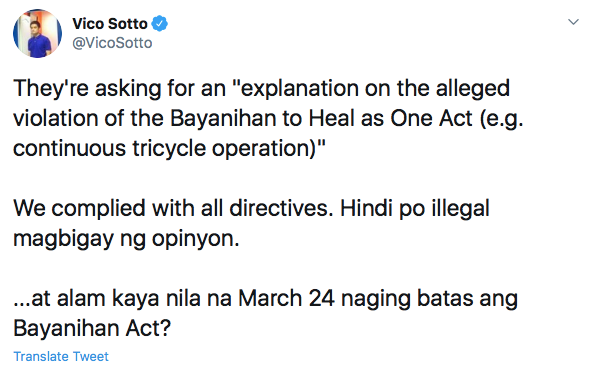 (If Duterte and his government will only think about ego and caprice, then Filipinos will suffer the most—from the frontliners who are unable to get immediate help and protection, our countrymen who are earning nothing and starving, up to their unlawful arrest and detention.)

(Why not just help those who are doing their jobs properly to find a solution and give citizens the proper aid?)

Aside from de Lima, some senators earlier frowned on the move of the NBI to summon Sotto, with one lawmaker saying that the agency’s action is “unconstitutional.”