Wuhan’s favorite noodles are back as virus-hit city recovers

WUHAN, China  — The noodles smothered in peanut sauce are as much a trademark of Wuhan as deep-dish pizza in Chicago or spaghetti in Rome. 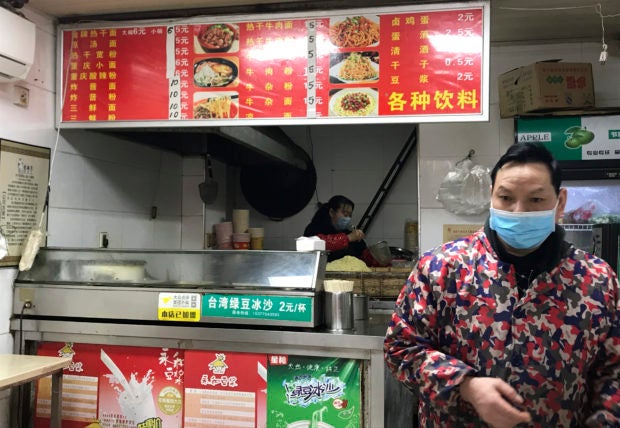 Stores owners of a store selling a local favorite “reganmian,” or “hot dry noodles,” prepare takeaway orders in Wuhan in central China’s Hubei province, Tuesday, March 31, 2020. The reappearance of Wuhan’s favorite noodles is a tasty sign that life is slowly returning to normal in the Chinese city at the epicenter of the global coronavirus outbreak. The steady stream of customers buying bags of noodles smothered in peanut sauce testifies to a powerful desire to enjoy the familiar again after months of strict lockdown. (AP Photo/Olivia Zhang)

Zhou Guoqiong still isn’t allowed to serve customers inside her shop, but the stream of eager customers now lining up outside to take away those noodles testifies to the powerful desire to savor the familiar again after the easing of months of strict lockdown.

Despite radically falling numbers of coronavirus infections, officials emphasize that Wuhan and the rest of China still have a long way to go.

But the reappearance of Wuhan’s favorite breakfast noodles is a tasty sign that life is slowly beginning to transition to normal in the Chinese city that served as the original epicenter of the global outbreak, first detected in December.

Five days after reopening, Zhou and her husband now sell several hundred bags of “reganmian,” or “hot dry noodles,” every day — less than before the outbreak, but more than enough to keep them busy.

“I’m happy as long as there is business,” Zhou said.

Wuhan has recorded 2,548 deaths from the coronavirus and reported more than 50,000 cases, and the city essentially shut down starting Jan. 23.

The head of the National Health Commission, Ma Xiaowei, said Tuesday that the “most dangerous, most critical stage” of the domestic outbreak appears to have passed. But he was insistent that strict quarantines on travelers and other restrictions such as school closures will be lifted only gradually and very, very carefully.

“At present, the epidemic situation in China is not over,” foreign ministry spokeswoman Hua Chunying said at a daily briefing.

China says almost all of its coronavirus cases are now brought into the country by travelers from abroad, and Wuhan has not recorded any new confirmed or suspected cases in a week. Officials have said it must go a full 14 consecutive days without new cases before they lift draconian travel restrictions and social distancing demands.

That can’t come soon enough for Mr. Xiao, who runs a small butcher shop and tries to be guardedly optimistic about the future. He said his stock can last 10 days at the most and he needs to see a big jump in business.

“I estimate in the next several months, I can sell half a cow every day,” said Xiao, who declined to give his full name.

Much still hangs in the balance: Will his three partners rejoin the business? And with no other work skills, what will he do if sales don’t pick up?
Along Yanzhi Road in Wuhan’s Wuchang district, shops are doing a brisk business in staples such as meat and noodles, their loudspeakers blaring to attract customers.

Outside a food market, a long line formed of mostly elderly customers, all keeping their distance from each other and wearing the required masks, with some adding rubber gloves and hats.

The market operates from only 9 a.m. to 5 p.m. and admits just 30 customers at a time, for a maximum of 20 minutes each. One of those in line, 70-year-old retired civil servant Xiao Yuxia, said she lives by herself and planned to eat fish for the first time in two months.

While many Chinese ordered what they needed using phone apps, 75-year-old retired worker Wang Haitao said he found that too confusing, and he and his wife are finding fewer choices on the list of options provided by community volunteers.

Along with meat, fresh vegetables appeared to be in good supply, though not with much variety. The food boxes delivered by volunteers to low-rise compounds typical of older neighborhoods such as Yanzhi Street were loaded mainly with carrots and cabbages.

The variety may be slightly better at the vegetable stalls set up around residential compounds, but social distancing is largely ignored at those: Customers and sellers gather in groups with little distance between them, bargaining and exchanging cash.

A delivery man who declined to give his name said he leaves all his packages at the fences set up to isolate residential compounds. After resuming his job two days earlier, he said he has his work cut out for him, with warehouses stuffed with packages that have been stuck there for months.

“We are still delivering the packages that people bought before the Lunar New Year,” he said, referring to the end of January. “It’s hard to tell which are daily necessities bought after the virus outbreak.”