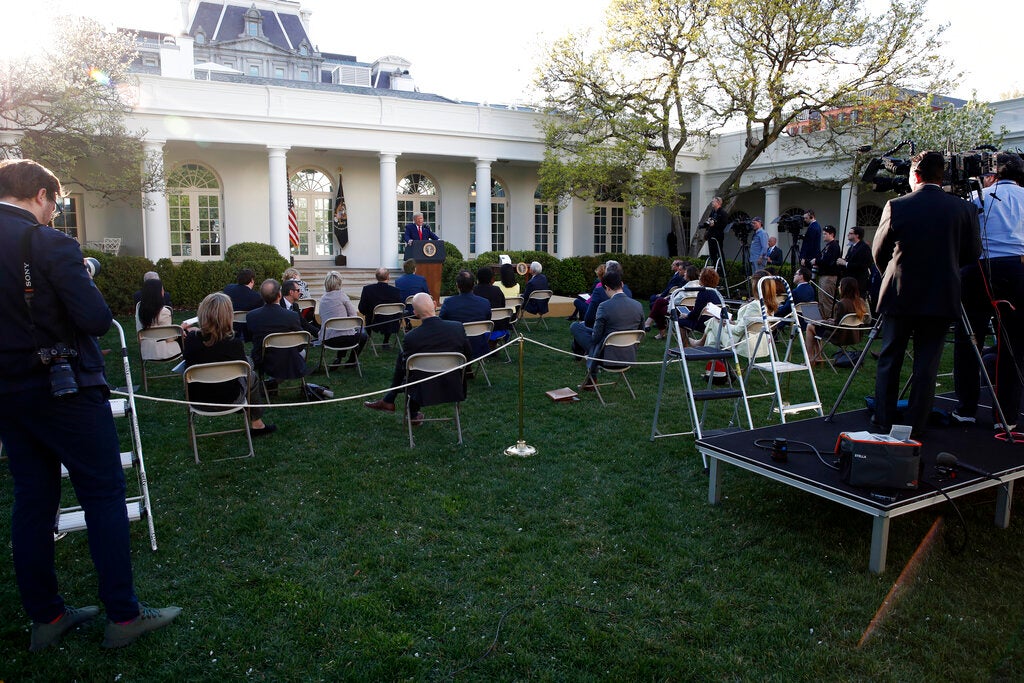 President Donald Trump speaks about the coronavirus in the Rose Garden of the White House on Monday in Washington. (AP)

WASHINGTON — For a few moments in the Rose Garden, the coronavirus pandemic is a bucking bronco with President Donald Trump on its back. His arm swings an invisible rope. He seems to be hanging on for dear life.

“Ride it like a cowboy,” he growls. “Just ride it. Ride that sucker right through.”

It’s where the teetotaling president serves a 5 o’clock cocktail of public-health policy, twisted facts, invented achievements, performance art, hectoring, cheerleading, erraticism, improvisation, self-praise, pet theories and a dash of eloquence. Shaken not stirred. Late in starting, finished when he feels like it.

The self-styled “wartime president” is, at least, a showtime president. He’s enjoying the high ratings of his briefings and boasting they’re up there with “The Bachelor.” Meantime on the streets of the country, people are recoiling in the wake of each passing stranger’s exhalation. In jammed hospitals, patients are fighting for life. The death toll arcs upward.

Still the show must go on.

Trump is the animated star of his production. Dr. Anthony Fauci is the stoic straight man, a venerated infectious disease scientist whose facial expressions are closely watched as if he is one oddball Trump remark away from losing it. He doesn’t. But he’s very tired on four hours of sleep.

Day after day, Trump free-associates, harangues reporters, assails critics and spreads misinformation on all aspects of the crisis, at times overshadowing the fact-based information that public health officials have come to deliver, in the moments when Trump steps aside to let them speak. It was here one day that Fauci broke ranks in Trump’s presence to refute his claims about a drug treatment for COVID-19.

On this bright Sunday, the briefing was moved to the resplendent garden from the clammy confines of the press briefing room, a long-ago indoor swimming pool that still feels like one. With social-distancing signs posted on the backs of chairs, it has taken on the character of a hazmat zone. It gives literal meaning to the pandemic’s cliche that we’re all in this together.

Out in the garden, Trump shoos away gnats and begins in buoyant fashion. The news is going to turn dark but he will take his sweet time getting there.

“Beautiful day in the Rose Garden,” he tells the press corps. “Tremendous distance between chairs. Social distancing. You practice it very well. We appreciate it. That’s great.”

Next up is word about a coming diagnostic test, almost instant, he says, and you don’t have to get a swab shoved so far up your nose like he did when he submitted to a virus test a few weeks back. He’s complained about it ever since. The new test is so easy that he said he just might get another one.

Executives step up to say what their companies are doing about producing and shipping critical medical supplies. Praise for Trump’s leadership is standard in their brief remarks. This is a president who wants a public display of appreciation and has said he may not call people back if he doesn’t get that.

We hear some basics about the world: “Think of it: 151 countries. Somebody said to me today … they didn’t know that we had that many countries. A hundred and fifty-one countries. That’s something.”

We hear a series of unverified statements: about an unidentified New York hospital he’s been told is hoarding masks, an uncorroborated theory that the fatality rate in the U.S. is lower than in other countries, his conviction that the speedy new tests will be “a whole new ballgame.”

He trots out the rhetorical bronco, saying some aides wanted him to just hang on and ride it out until the crisis passed but he felt he should do more.

Trump’s doggedly positive spin, evident for several months, begins to fray when he announces a month-long extension of social distancing guidelines that were to expire Monday.

“The better you do,” he says of distancing, “the faster this whole nightmare will end.”

As the briefing slips into its second hour, it becomes apparent that Trump is conditioning Americans to expect far more deaths from COVID-19 than anyone would think from his history of minimizing the crisis. Gone is the talk about the virus maybe going away like magic in the warmth of spring.

Fauci and other public-health authorities had told him 100,000 to 200,000 people could die in this country from the virus if not enough is done to mitigate the pandemic.

The president then invokes a far grimmer number, 2.2 million, an estimated death toll if no steps were taken to fight the pandemic, and summons Dr. Deborah Birx of the task force to explain it.

Why introduce an even starker scenario than the already scary one?

Behind such bravado, though, is a president seeing the pandemic — “the viciousness of it” — in increasingly personal and sober terms. “A lot of people are dying,” he says, “so it’s very unpleasant.”

He speaks at length of body bags and “freezer trucks” he’s seen on TV taking the dead from Elmhurst Hospital in Queens. The building is so familiar from his New York childhood that “I can tell you the color on the outside, the size of the windows. I mean, I know it very well, right?”

The sun is slanting low in the garden as Trump brings this briefing to a close.

“I want our life back again,” he says.

“I want our country back.

“I want the world back.

“I want the world to get rid of this.”

Read Next
Wuhan’s favorite noodles are back as virus-hit city recovers
EDITORS' PICK
In speaking out, young athletes prove they are more than just the sum of their skills
COOCAA TV Bounce Back Sale offers up to 50% off
Sotto: Duterte could get terror bill next week
Smart launches new LTE-Advanced Pocket WiFi Plans starting at P699 per month
DOH: Presymptomatic infection possible
Cherry Mobile teams up with Cloud Panda PH, launches online store
MOST READ
Kim Chiu’s viral dance video has no violations, MMDA agrees
Something about KC that worries mom Sharon
‘Stay informed, vigilant’: UP urges students, alumni to report fake Facebook accounts
Sotto: Duterte could get Anti-Terrorism Bill next week
Don't miss out on the latest news and information.