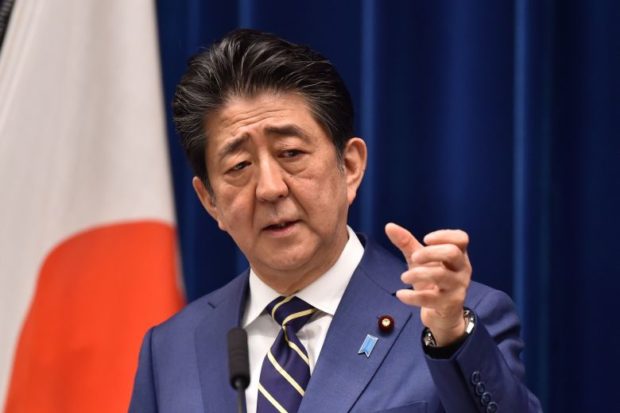 Japanese PM Shinzo Abe said that a massive unprecedented package will be crafted by the government in 10 days, during a news conference in Tokyo on March 28, 2020. PHOTO: AFP via The Straits Times/Asia News Network

TOKYO — Japan’s megacities of Tokyo and Osaka came to a virtual standstill on Saturday (March 28) as millions of residents heeded their leaders’ call to stay home this weekend to curb the spread of the coronavirus.

The governors of at least eight prefectures in Japan – Tokyo, Chiba, Kanagawa, Saitama and Yamanashi, which comprise the Greater Tokyo metropolitan area, as well as Osaka, Fukuoka and Kumamoto – asked their residents to avoid going out unnecessarily.

“The cherry blossoms will definitely bloom again next year and you can enjoy the cherry blossoms next year,” implored Tokyo Governor Yuriko Koike on Friday. “Until then, I hope everyone will work together to overcome the current difficulties.”

Prime Minister Shinzo Abe, echoing the prefectural requests, told a news conference on Saturday night that Japan was on the brink of an uncontrollable “explosive” surge in cases like that of Europe and America.

“We need everyone to brace for a prolonged battle against the coronavirus,” he said, noting a rise in cases without known transmission routes. “We are at a very critical moment, even if at this point there is no need for a state of emergency.”

The contagion of Covid-19 is escalating in Japan, which until now appeared to be relatively unscathed by a global pandemic, though experts have questioned if it is testing widely enough to have a full picture of the gravity of the situation.

But at least 200 new infections were confirmed on Saturday in a daily high, bringing the total number of cases to 1,724 at 11pm, reported NHK.

Tokyo and Chiba recorded 63 and 62 new cases respectively, including a new cluster in Chiba – a welfare home for the disabled where 32 staff and 26 patients have tested positive for the coronavirus.

The exhortations by public leaders as well as the recent surge in numbers have changed public sentiment, which until now has been one of general indifference.

Japan, unlike elsewhere in the world where mandated social distancing has been the norm, has called for the public to do their part and “exercise self-restraint”.

And while governments begin to adopt online news conferences around the world, Mr Abe’s on Saturday had reporters sitting shoulder to shoulder with one another.

Even if Japan declares a state of emergency, it will unlikely go as far as to use criminal punishments to impinge on an individual’s right of movement as this is protected by the Constitution.

The top-down measures so far may lack teeth, but many business operators are acting on the government’s recommendations so as to give people fewer options, by closing this weekend and reducing operating hours going forward. These include Starbucks and Dean and Deluca, as well as Toho Cinemas outlets in Tokyo.

Shopping malls including Ginza Six, Roppongi Hills, Shibuya 109 and Shibuya Scramble Square, as well as department stores such as Lumine and Takashimaya, are all also closed this weekend, save for essential services.

Few were at the Shibuya Scramble Crossing on Saturday, where the giant video screen occasionally replayed the video of Ms Koike asking people to stay home.

Popular cherry blossom viewing sites like the Shinjuku Gyoen, Ueno and Yoyogi parks have closed or restricted access to the public.

What may further dissuade the public from going outdoors are unseasonable temperatures on Sunday, with snowfall expected in Tokyo.

Mr Abe on Saturday night vowed to help small businesses hurting from the pandemic by pledging Japan’s “boldest ever” stimulus measures to cushion the economy from a shock that is expected to be worse than that of the 2008 global financial crisis.

The package, which will be submitted to Parliament within 10 days, is likely bigger than the 56.8 trillion yen (S$751.5 billion) emergency package in 2008. This amounts to 10 percent of Japan’s gross domestic product today.