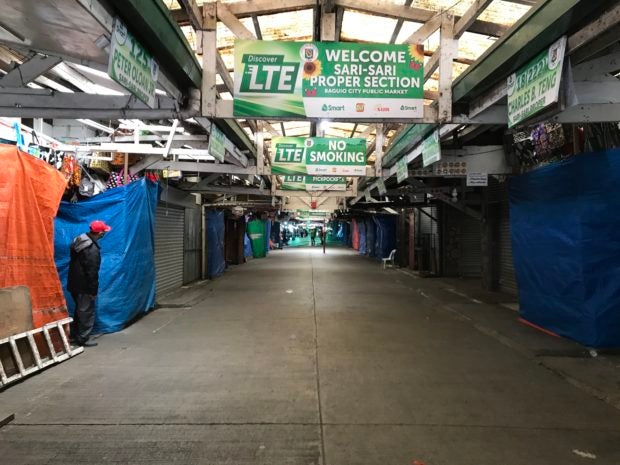 EMPTY SPACE Only a section of the Baguio City Public Market, which used to teem with market goers, has been used to sell food on designated market days while Baguio City undergoes a 24-hour quarantine until April. Most of the stalls have been shuttered as of March 27. —VINCENT CABREZA

More areas — from Baguio City in the north to Cebu City in the south of the country — have declared a total lockdown after the Department of Health (DOH) affirmed on Saturday the presence of persons found positive of the new coronavirus disease, or COVID-19, in their localities.

“With this information, an opportunity [has presented itself] to fast-track our healing process by closing our borders in the next two weeks to travels except for food and other cargo,” he said after a peace and order council meeting on Friday.

Baguio residents coming from outside the city will be barred entry. Excluded are those from Benguet province, where salad vegetables are shipped to Metro Manila.

President Duterte had imposed the Luzon-wide enhanced community quarantine (ECQ) from midnight of March 17 to midnight of April 13 to curb the spread of COVID-19.

The DOH listed 10 COVID-19 patients in this city, including a woman who returned from Italy. Seven others came from Metro Manila, which was placed under quarantine days before Mr. Duterte locked down the entire island of Luzon.

On March 15, the city government was alarmed when a government employee from Parañaque City was confirmed to have contracted the virus after attending her agency’s board meeting at a hotel here.

Because COVID-19 has so far infected people who are not from Baguio or who have returned from coronavirus-stricken places, Magalong has pushed for changes to the DOH protocols that prevented health officials from tracking down possible transmissions unless a person under investigation (PUI) for the infection has received a final confirmatory result from tests made by the Research Institute for Tropical Medicine.

Unless contact tracing is done immediately, “there is a good chance of transmission,” Magalong said, as PUI contacts continue to move around without being examined. 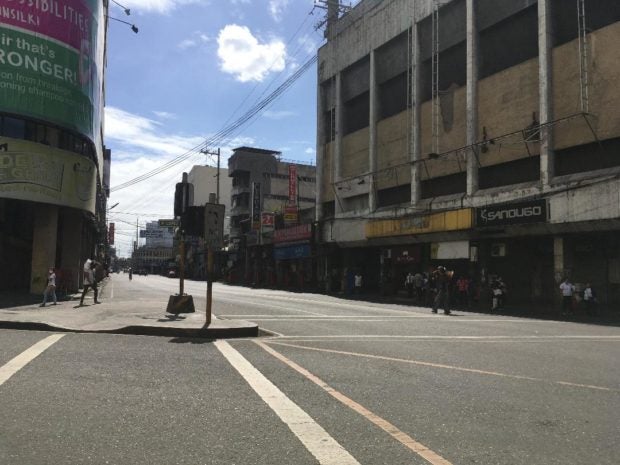 GHOST CITY Streets in downtown Cebu City, which used to be jammed with vehicles and pedestrians, are empty at dusk on Saturday, after the enhanced community quarantine that required residents to stay indoors took effect at noon on the same day. —NESTLE SEMILLA

In Cebu City, at exactly noon on Saturday, ships honked their horns while sirens of firetrucks blared to signal the start of the city’s one-month border closure.

Cebu City Mayor Edgar Labella decided to enforce a total lockdown after health officials confirmed the death of two COVID-19 positive patients in the city, one of whom was Dr. Helen Tudtud, a pathologist at at the Vicente Sotto Memorial Medical Center.

Labella asked residents to follow the strict home quarantine unless one is the family’s quarantine pass holder who could go out to buy basic necessities. While public transportation is suspended, establishments that cater to basic and essential needs like hospitals, gasoline stations, banks, groceries, pharmacies, water stations, among others, were allowed to stay open.

The city has issued four color-coded ECQ passes: green for Cebu City residents; red for employees and officials of government offices; blue for nonresidents of Cebu City working in the city; and white for crisis management teams and other front-liners.

On Saturday, the streets were empty as policemen barred the entry of vehicles and people coming from neighboring cities and towns unless they could present identification cards.

Col. Hector Grijaldo, director of the Cebu City Police Office, deployed policemen to man the 15 entry points of the city while patrol cars roamed the streets to check if residents heeded the mandatory “stay at home” order of the city government.

In Negros Occidental, Bacolod City and the rest of the province would implement their own ECQ from March 30 to April 14.

“This is, in a manner of speaking, ‘martial law’ by necessity. We need to strictly implement this executive order because this will be for the good of everybody in Bacolod City,” said Mayor Evelio Leonardia on Friday. Negros Occidental Gov. Eugenio Jose Lacson also issued an executive order placing the entire province under an ECQ from March 30 to April 14.

But in the neighboring province of Negros Oriental, which has yet to impose an ECQ, it were the doctors who wanted the local government to impose a total lockdown “before it is too late.”

The plea came at a time when a hospital in the capital city of Dumaguete declared it would no longer take in suspected COVID-19 cases due to dwindling personal protective equipment (PPE) and other medical supplies.

“We have very limited resources for this battle against the coronavirus. Our front-liners are brave but are very afraid because so many of our fellow health care workers have already died because of COVID-19,” read a statement on Saturday by Negros Oriental Medical Society addressed to Gov. Roel Degamo and Dumaguete City Mayor Felipe Antonio Remollo.

The Negros Oriental chapter of the Philippine Nurses Association (PNA), together with the deans of local nursing schools, and the head nurses of the hospitals in the province, also echoed the call of medical doctors in asking for a declaration and strict enforcement of an ECQ to contain the spread of COVID-19.

“We need your help to protect our health care workers so we can care and protect our people,” Frances Almira Cal, president of the PNA chapter in the province said.

Negros Oriental has two COVID-19 deaths based on the March 27 report of the DOH in Central Visayas.

“We strongly believe that an enhanced community quarantine is our only chance against this coronavirus,” said Dr. Ma. Carmelita Vera Cruz, an anesthesiologist.

She said it seemed that even after several meetings with the government leaders and their advisers, the significance of the need to “flatten the curve” had not been fully understood.

On Friday afternoon, Dr. Joven Occeña, an anesthesiologist, announced on his Facebook wall that the local COVID-19 intubation team was “temporarily disbanded.” He gave two conditions for their return to work: a declaration of ECQ in Negros Oriental; and a provision of complete PPE and gear.

He explained in the thread that it would be “too risky” for the team to continue intubating COVID-19 patients without the appropriate protective gear.

On Friday night, the Ace Dumaguete Doctors Hospital announced that it could no longer accommodate COVID-19 suspected patients due to their “dwindling personal protective equipment” and other supplies.

“This war will not be fought in hospitals with our front-liners but with yourselves in your homes,” Ace Dumaguete medical director Dr. Brenda Diputado told the public, urging them to stay home.

Dr. Vera Cruz added that the constant influx of travelers from outside the province was “not helping at all as each person is a potential carrier of the virus.”Southern Luzon lockdowns

In Albay, the mayors of the towns of Sto. Domingo, Bacacay, Malilipot, Malinao, Tiwi and of Tabaco City, all under the first district of the province, declared on Saturday a total lockdown after a resident was found positive for COVID-19—one of the three cases announced by the DOH on Friday night that marked the end of Bicol’s lucky streak of surviving without a single virus case since the Luzon-wide quarantine was imposed on March 16.

Tabaco City Mayor Krisel Lagman-Luistro, Area Development Team 1 chair, said the mayors came up with the enforcement mechanism tagged as ECQ level 2 so they could closely monitor the movement of people in their respective areas.

The move meant issuing separate quarantine passes in various villages, towns, as well as merchant passes to roving businessmen and vendors. The total lockdown would take effect 12 a.m. on Sunday.

The first three cases of COVID-19 in Bicol region were recorded on Friday in Legazpi City in Albay and Naga City in Camarines Sur, according to the DOH COVID-19 tracker. The 50-year-old native of Bacacay town branded as PH765 arrived in March.

Legazpi City Mayor Noel Rosal confirmed that the other COVID-19 positive case was an American citizen who arrived in the city on March 8 and consulted at the Bicol Regional Training and Teaching Hospital. He was also discharged for home quarantine in March 17 after the swab test.

Rosal has ordered a total lockdown on Friday night in three villages in the city where the American rented apartments and roamed prior to his test. Naga City Mayor Nelson Legacion shut down the city’s borders against the adjacent town of Milaor after it was revealed that PH763 was a resident of the town. He, however, did not say until when the lockdown would be in effect.

PH763, a 48-year-old woman from Milaor, arrived from Metro Manila on March 5, and was swabbed for COVID-19 on March 17, at the Bicol Medical Center in Naga City. She was also discharged for home quarantine. 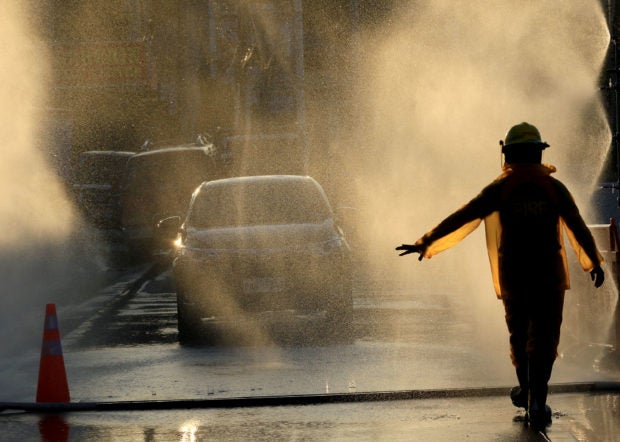 MEDICATED SPRAY Motorists, in this photo taken on March 28, have to pass through a “disinfection gate” along the national road at the boundary of Calamba City and the town of Los Baños in Laguna province, which is on total lockdown due to the increasing number of people in the province confirmed to have been infected by the coronavirus disease despite the Luzon-wide lockdown. —RICHARD A. REYES

The province of Laguna was also placed on “total lockdown” on Saturday at 1 p.m., Gov. Ramil Hernandez announced on social media.

The province has 23 COVID-19 positive patients as of Saturday.

Quezon province also shut borders under a “stricter enhanced community quarantine” and barred the entry of nonresidents but also disallowed intertown travel within the province.

Private vehicles from the Bicol region and other provinces are also not allowed to pass Quezon’s territories.