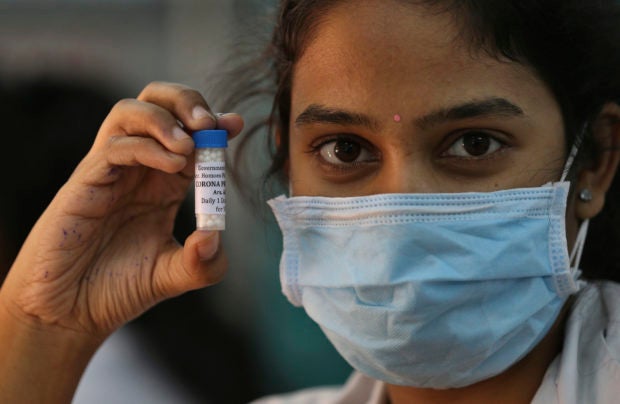 In this Thursday, March 5, 2020, file photo, an Indian doctor displays homeopathy medicine recommended by a group of experts under India’s AYUSH ministry, that claims to prevent COVID-19, at a government hospital in Hyderabad, India. As South Asian nations, including India, brace for the likely spread of the virus, they are facing another battle: reams of misinformation, misleading rumors, and false claims. In India, a major challenge comes from advisories released by a parallel health ministry set up by the Modi government that promotes alternative therapies such as yoga and traditional Ayurveda medicine. The advisories by AYUSH recommend herbs and homeopathy as cures and prescribe virus prevention methods. These advisories have drawn widespread criticism. (AP Photo/Mahesh Kumar A., File)

NEW DELHI — The message started with an outlandish claim: The coronavirus was retreating in India because of “cosmic-level sound waves” created by a collective cheer that citizens had been asked to join.

Messages were pinging from phone to phone across this country of 1.3 billion saying the applause Prime Minister Narendra Modi had organized for health workers had been detected by a “bio-satellite” that confirmed the weakening of the virus.

It of course wasn’t true.

As India and other South Asian nations work to stop the spread of the virus, they face another battle: reams of misinformation.

With the pandemic starting to gain a foothold in the region, social media sites are rife with bogus remedies, tales of magic cures and potentially hazardous medical advice. Experts are urging caution and warning that the “coronavirus infodemic” could have disastrous consequences.

Its a trend also seen elsewhere and governments around the world have been urging citizens not to listen to or spread rumors about the pandemic.

So far it hasn’t worked in South Asia, a region where online misinformation has in the past had deadly consequences such as lynchings, arson and communal riots where neighbors turn on one another.

On Tuesday, Indians were ordered to stay indoors for three weeks in the world’s biggest coronavirus lockdown. In announcing the move, Modi reiterated the danger of misinformation.

“I appeal to you to beware of any kind of rumors or superstitions,” the prime minister said.

Earlier appeals against virus rumors have yet to prove effective.

Poultry sales in India plunged following false claims that chickens were linked to the pandemic. Racial attacks against people from the country’s northeastern states increased after rumors spread that they carried the virus.

On Sunday, people in a remote village in Manipur state locked themselves inside their homes because of rumors that fumigants were being sprayed from the sky to kill the virus.

The government has asked social media companies to launch awareness campaigns about virus misinformation. It also set up a government WhastApp channel where people can ask questions about the virus and vet claims they hear.

On Monday, Amitabh Bachchan, a top Bollywood star who has more than 40 million Twitter followers, said clapping and blowing conch shells would “destroy virus potency.” He later deleted the tweet after facing criticism.

Elected representatives from Modi’s Bharatiya Janata Party have also offered bizarre claims of cures for the virus, ranging from cow urine and cow dung to cloves “energized by mantras.”

Rumors have spawned concerns elsewhere in the region as well.

In Bangladesh, some clerics claimed Muslims would not be affected by the virus and exhorted tens of thousands of people to gather for a mass prayer last week despite concerns about the health risk.
One preacher claimed to have interviewed — in his dream — a man in Italy to obtain a cure for the virus.

When a journalist at a leading private television station reported about the misinformation, he received death threats.

“We are monitoring and doing our part, but it (misinformation) comes from various sources, one after another,” said Zakir Hossain, a spokesman for the Bangladesh Telecommunication Regulatory Commission. “This is a huge task.”

Pakistan too has had to fight against religious leaders urging the devout to attend prayers and promising their faith will protect them. A cleric in Lahore made a video saying it was impossible to catch the virus while praying and said he should be hanged if he were wrong. Police arrested him instead and he made another video urging people to take the pandemic seriously and wash their hands.

On the outskirts of Islamabad the army was called in to shut down a mosque after its prayer leader despite exhibiting symptoms kept his mosque open.

In Sri Lanka, authorities warned that legal action will be taken against people who spread false information over social media. Several people have been arrested.

Pakistan has been the worst-hit South Asian nation with some 1,200 virus cases reported. India has reported more than 725.

For most people, the virus causes mild or moderate symptoms, such as fever and cough that clear up in a few weeks. But for some, it can cause more severe illness, including pneumonia and death.

There are concerns that if cases were to surge in South Asia, it would overwhelm already strained health systems.

Sumaiya Shaikh, an editor for fact-checking website ALT News, has been tracking misinformation on messaging apps in India since before the pandemic.

In January, when the virus was still largely limited to China, Shaikh said India experienced a deluge of false WhatsApp messages claiming that Chinese police were shooting people suspected of having the disease.

“This misinformation has reached a critical mass and is jeopardizing public health,” she said.

The search for accurate virus information in India is complicated by advice issued by a parallel health ministry, the Ministry of AYUSH, created in 2014 by Modi to promote alternative therapies such as yoga and traditional Ayurveda medicine.

The ministry has recommended herbs and homeopathy as cures for the virus, along with frequent sipping of water boiled with basil leaves, crushed ginger and turmeric.

P.C. Joshi, a medical anthropologist at the University of Delhi, said that advice “falls into the category of misinformation which can be hazardous for public health.”

The ministry did not respond to requests for comment.

The messages spreading online, often shared among friends and relatives, have unnerved many Indians who don’t know whether to take them seriously.

When the messages claiming that the virus was retreating in India spread on WhatsApp, members of the Sehgal family wanted to leave their home and join others outside celebrating. But Siddhart stopped them.

“My family usually believes whatever they get on WhatsApp regarding the virus,” he said. “It’s hard to explain to them that most of it is fake.”