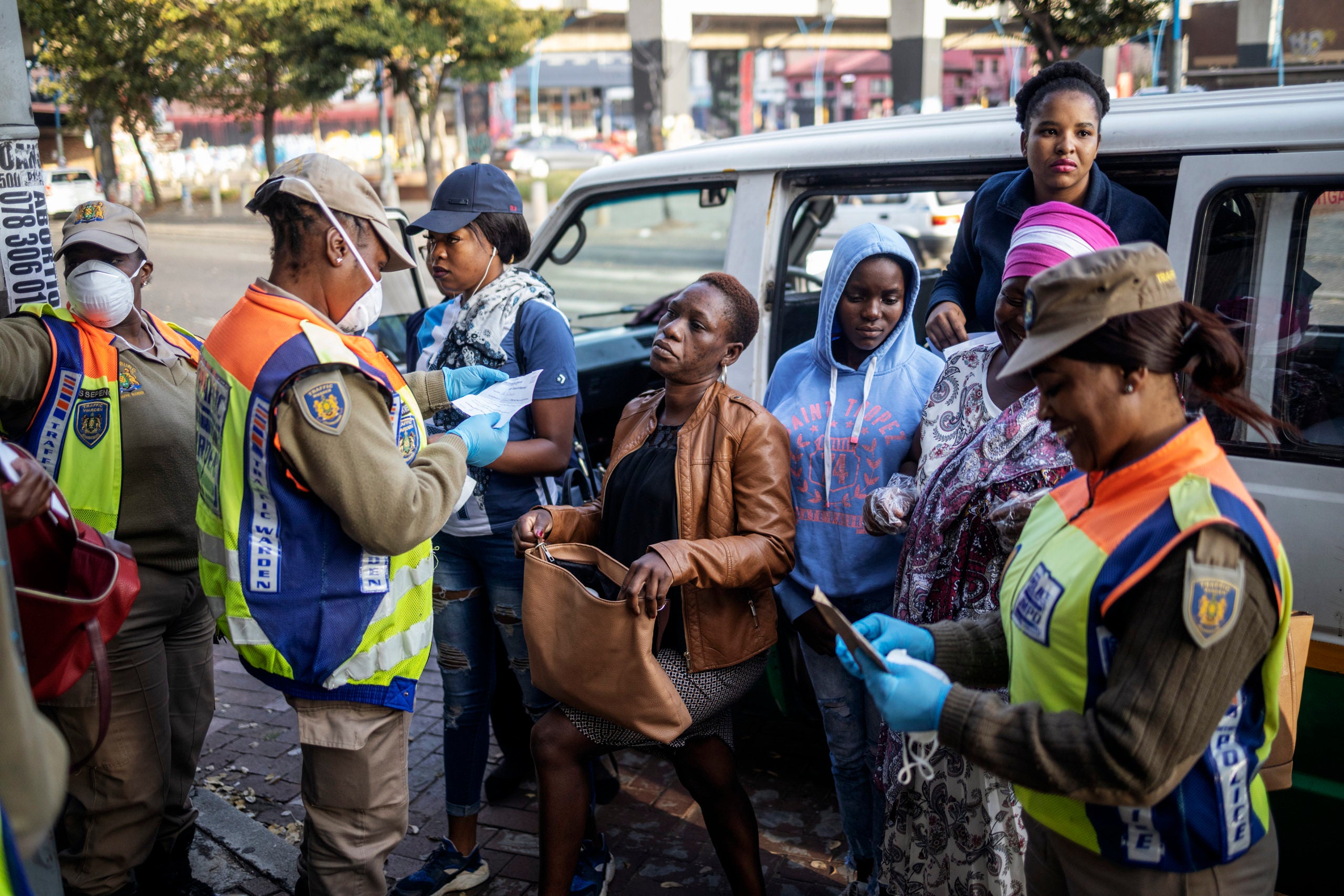 Members of the Johannesburg Metro Police Department (JMPD) check the documents of commuters during a police roadblock in the Johannesburg CBD, on March 27, 2020 – South Africa came under a nationwide lockdown on March 27, 2020, joining other African countries imposing strict curfews and shutdowns in an attempt to halt the spread of the COVID-19 coronavirus across the continent. (Photo by Michele Spatari / AFP)

The news came as World Health Organization director for Africa warned of a “dramatic evolution” of the disease which has, according to AFP tally, killed 94 out of nearly 3,500 infected people across the world’s poorest continent.

South Africa, which has the highest number of confirmed cases at 1,170, recorded its first death on Friday.

Earlier Health Minister Zweli Mkhize had reported two deaths, but late on Friday, he revised the toll to one. The second patient had died on admission.

“The clinical picture was suggestive of COVID-19 and therefore a test was conducted,” and came back negative, Mkhize said in a statement.

President Cyril Ramaphosa has ordered South Africa’s 57 million people to stay at home for 21 days, joining countries across the globe in imposing strict measures to halt the spread of the disease.

But many people especially from the poor neighborhoods, defied the order after it came into effect at midnight Thursday, lining up outside food stores or at bus terminals.

The streets of Alexandra, a Johannesburg township, were buzzing with people and traffic as if it was a normal, busy Friday afternoon.

Earlier on Friday, police appeared overwhelmed in downtown Johannesburg, where hundreds of shoppers tried to force their way into a supermarket.

“The lockdown is a good thing for the country, even though I feel that a lot of people are taking it for granted, saying this virus is not for us… which is bad because by the time we wake up this thing will have spread enormously in the country,” said bank employee Dumisani July, 39, wearing a mask and black latex gloves.

The patient who died in the Western Cape province was a woman aged 48. She was suffering from a pulmonary embolism, the minister said.

The tally of infections in Africa’s biggest industrialized economy could reach 1,500 “within a few days”, Ramaphosa has warned.

Although Africa’s toll is far lower than in the United States, Europe, and the Middle East, experts say the world’s poorest continent is especially vulnerable, given its poor sanitation, weak healthcare systems, overcrowding and conflicts.

WHO Africa boss Matshidiso Moeti said there have been about 300 new cases per day in recent days and called for “intensified action by African countries”.

During South Africa’s military-enforced shutdown, jogging, dog-walking and the sale of alcohol are banned.

Violation of any of the regulations will carry a six-month jail sentence or a fine.

In the Democratic Republic of Congo, the country’s pointman on the pandemic said the first case of coronavirus detected outside Kinshasa — is in the restive eastern province of Ituri, which was also touched by a now-waning epidemic of Ebola.

The DRC has 54 cases, four of them fatalities, said crisis coordinator Jean-Jacques Muyembe.

The DRC’s sprawling capital, Kinshasa, was meant to go into lockdown on Saturday for four days, but local officials delayed the measure after the announcement caused a spike in the price of basic goods and worries about unrest.

In East Africa, Ugandan police said two men were in the hospital after being shot for violating transport restrictions imposed to curb the virus.

Police stopped the two on a motorbike near Kampala but “they attacked one of the officers, he fired the warning shot in the air but they charged at him and he shot one of them in the leg and another in the stomach,” Uganda metropolitan police spokesman, Patrick Onyango told AFP.

President Yoweri Museveni has not ordered a shutdown but urged people to stay home. Kenya and Rwanda in the region have also imposed restrictions.

In the Sahel, Burkina Faso, which last week recorded sub-Saharan Africa’s first death, announced that eight towns, including the capital Ouagadougou, would be quarantined for two weeks from Friday.

In Niger, President Mahamadou Issoufou ordered a curfew from 7 pm to 6 am for the capital Niamey. He also mandated a “graceful reduction of sentences” for 1,540 prisoners, “for humanitarian reasons and to relieve the congestion of our prisons”.

In Mali, the government has imposed some anti-coronavirus measures, including a night-time curfew, but said a long-delayed parliamentary election would go ahead on Sunday.

The impoverished state has scheduled the elections as a means to win back public confidence in its political system as it battles a raging jihadist revolt.

The public health system in Zimbabwe, which has so far recorded five positive cases, has been in a state of near-collapse for years. Doctors and nurses this week went on strike over lack of coronavirus protective gear.

“Most African countries will not be able to effectively implement the severe restrictions on movement that we have seen globally,” it said.

“The impracticality of implementing widespread self-quarantine in shantytowns or informal settlements means that this will not be an option.”