COVID-19 infections rise in New York with peak weeks away 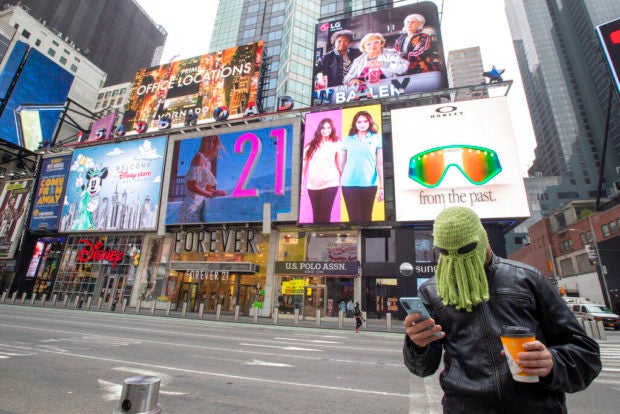 Jon Makay, of Harlem, wears an octopus hat to fend off coronavirus, Wednesday, March 25, 2020, in New York’s Times Square. The number of people hospitalized with COVID-19 in New York climbed to 3,800, with close to 900 in intensive care, with the peak of the outbreak weeks away, Gov. Andrew Cuomo said Wednesday. AP Photo/Mary Altaffer

ALBANY, N.Y. — Hospitalizations from COVID-19 were rising faster than expected in New York as residents and leaders prepared for a peak in cases that is expected to still be weeks away. Temporary hospitals, and even a morgue in Manhattan, are being setup.

The number of people hospitalized with COVID-19 in New York climbed to 3,800, including close to 900 in intensive care, with the peak of the outbreak weeks away, Gov. Andrew Cuomo said Wednesday.

The hospitalizations came as the state tallied more than 30,000 confirmed cases and 285 deaths, most tied to New York City.

The critical question remains whether the severe “social distancing” restrictions recently enacted by New York will help the state avoid a worst-case scenario of overwhelmed hospitals. Cuomo at a state Capitol news briefing pointed to one possible early sign the restrictions might be working.

“This is a very good sign, and a positive sign,” he said. “Again, I’m not 100% sure it holds or it is accurate. But the arrows are headed in the right direction.”

In a White House briefing, Dr. Deborah Birx, the coordinator of the White House’s coronavirus task force, pointed to the number of new coronavirus cases in New York City as being relatively constant over the last three days. But she warned that hospital cases will continue to increase because they reflect people contracting the illness before full mitigation efforts kicked in.

New York officials are keeping a close eye on already-stressed hospitals as the number of cases is projected to rise for perhaps three more weeks. Cuomo said as many as 140,000 hospital beds may be needed in a state with 53,000. Having enough ICU beds with ventilators is a particular concern.

“The actual hospitalizations have moved at a higher rate than the projected models,” Cuomo said. “Because that higher infection rate means faster, higher capacity on the hospitals.”

Several temporary hospitals are planned in the New York City area, a Navy hospital ship is being deployed and existing hospitals are increasing capacity by at least 50%.

New York City has become such a hotspot in the pandemic that White House officials urged people who have left the city amid the outbreak to self-quarantine for 14 days after their departure.

Cuomo believes the high number of cases in the city is partly because it is a worldwide travel destination, and partly due to its density.

New York University’s Grossman School of Medicine has asked fourth-year medical students who have met graduation requirements if they would be willing to start their internships six weeks early to help out during the pandemic.

Sixty-nine said they would be willing to help.

“It’s really important to join what’s going on here, we have the training to be able to help and do our part,” said Evan Gerber, a 26-year-old student.

The school is still waiting on final approval from the state and the medical licensing body, but administrators said both of those entities had been responsive.

If approved, they’ll be working at hospitals run by NYU and the city in emergency rooms and internal medicine program areas.

Meanwhile, New York is aiming to bring additional healthcare workers and equipment on a rolling basis to the state. That’s in addition to 40,000 in-state doctors, nurses and other health care workers, including retirees and students, who have volunteered to help during the outbreak.

Cuomo said the 350-room Four Seasons Hotel in Manhattan is the first of several hotels set to providing free lodging to medical personnel during the crisis.

As Cuomo pleaded for more ventilators to save the lives of COVID-19 patients, a police department in suburban Albany did its part by offering one that had been held for years as evidence in a murder case.

The ventilator had been used to keep teenager Adeujuan Adams alive after he was stabbed in the neck in 2012 by another teen who wanted his bike. The Guilderland Police Department kept it as a potential source of evidence in the attacker’s trial after Adeujuan died at age 16 in 2013. The attacker was convicted.

The Times Union reports that police returned the device Tuesday to equipment supplier Landauer Medstar in the Bronx, in hopes it could help care for COVID-19 patients.

“This young man’s life was tragically cut short, but the hopes that a device that once brought him some relief could be re-purposed to assist others is nothing short of extraordinary,” Albany County District Attorney David Soares said.

New York City is building a temporary morgue to deal with an expected influx of deaths from the coronavirus outbreak.

The Office of Chief Medical Examiner said Tuesday that the refrigerated structures and mobile command center going up in Manhattan were meant to provide emergency capacity if the city’s permanent morgues fill up.

A spokeswoman for Mayor Bill de Blasio said as part of the city’s state of emergency, the medical examiner’s office was enacting “emergency contingency plans to help prepare for every possible outcome” of the public health crisis.

The medical examiner’s office has used temporary morgues in the past, including in the aftermath of the Sept. 11, 2001, terrorist attacks.

For most people, the new coronavirus causes mild or moderate symptoms, such as fever and cough that clear up in two to three weeks. For some, especially older adults and people with existing health problems, it can cause more severe illness, including pneumonia and death.

New York City’s criminal court has started conducting all arraignments by video conferencing to limit traffic in courthouses during the coronavirus outbreak.

The first arraignments via Skype were held Wednesday. The state’s court system says all parties — the judge, prosecution and defense attorney and defendant — will appear from different locations.

Defendants who’ve tested positive for the disease, are exhibiting flu-like symptoms or are at high-risk of serious illness if they get infected are being diverted to small, neighborhood courthouses in Manhattan and Brooklyn for their video arraignments.

The rest are being taken to a video setup at central booking.

A Long Island retirement community said Wednesday that a sixth resident has died of the new coronavirus.

The facility said then man lived in an independent living section and had no known pre-existing conditions.

Peconic Landing announced the deaths of four residents last week, followed by a fifth on Monday.