COVID-19: Jakarta residents stay home as a state of emergency in the capital takes effect 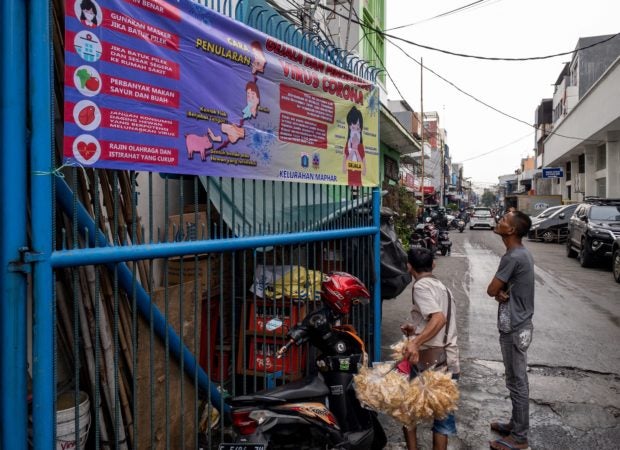 A man stands by a gate showing a public service announcement warning residents about the COVID-19 coronavirus outbreak, at the entrance to a quiet street in Jakarta on March 18, 2020. Photo by BAY ISMOYO / AFP

JAKARTA — Jakarta residents remained at home on Saturday (March 21), a day after the city’s governor declared a state of emergency in the Indonesian capital for the next two weeks to curb the spread of the coronavirus.

Public transportation, such as buses and the MRT, were still running, but stations were less busy. The MRT’s operating hours have been shortened by five hours and it now operates from 6am to 8pm.

Entertainment outlets, such as spas and karaoke bars, are set to close from Monday, while many places of worship have suspended their activities .

St Theresia Catholic Church in Menteng, Central Jakarta, a favourite with foreigners, said on Instagram it would live-stream masses.

Mr Stefanus Ridwan, chairman of the Association of Indonesian Shopping Centre Operators, told The Straits Times that Jakarta malls had slashed their operating hours by three hours on average to nine hours since Friday. But supermarkets in the malls, such as Lottemart and Giant, are still open from 10am to 10pm to serve the daily needs of customers, he added.

“We are trying to avert queues so that buyers maintain a safe distance from each other. This is to comply with social distancing measures,” he said.

Indonesia reported 81 new coronavirus cases on Saturday, its second biggest daily toll so far, bringing the total number of infections to 450 in the vast country, the world’s fourth most populous with around 267 million people. It also recorded six more deaths, bringing the overall death toll to 38, the highest in South-east Asia. So far, 20 patients have recovered from Covid-19, the respiratory disease caused by the coronavirus.

Jakarta has been the worst hit with 23 deaths reported and 267 people infected. More than half of the new infections on Saturday or 44 were recorded in the capital, which has a population of about 10 million.

Mr Achmad Yurianto, government spokesman on the Covid-19 outbreak, told reporters that 2,000 rapid tests had been conducted since Friday on those who were in contact with patients and that such tests would continue.

“Last night we visited the families of patients who tested positive (for the virus) and are being treated at hospitals. We examined all their family members, and will also test their colleagues at their workplaces,” he said.

Indonesia’s health ministry has estimated that between 600,000 and 700,000 people are at risk of being infected and the government is preparing for up to one million rapid tests.

Mr Achmad said Indonesia is expecting 150,000 test kits to arrive on Sunday and these would be distributed to regions where many cases have been detected.

The health ministry has also prepared more than 12 million surgical masks and more than 81,000 N95 masks to be delivered to health agencies nationwide, he added.