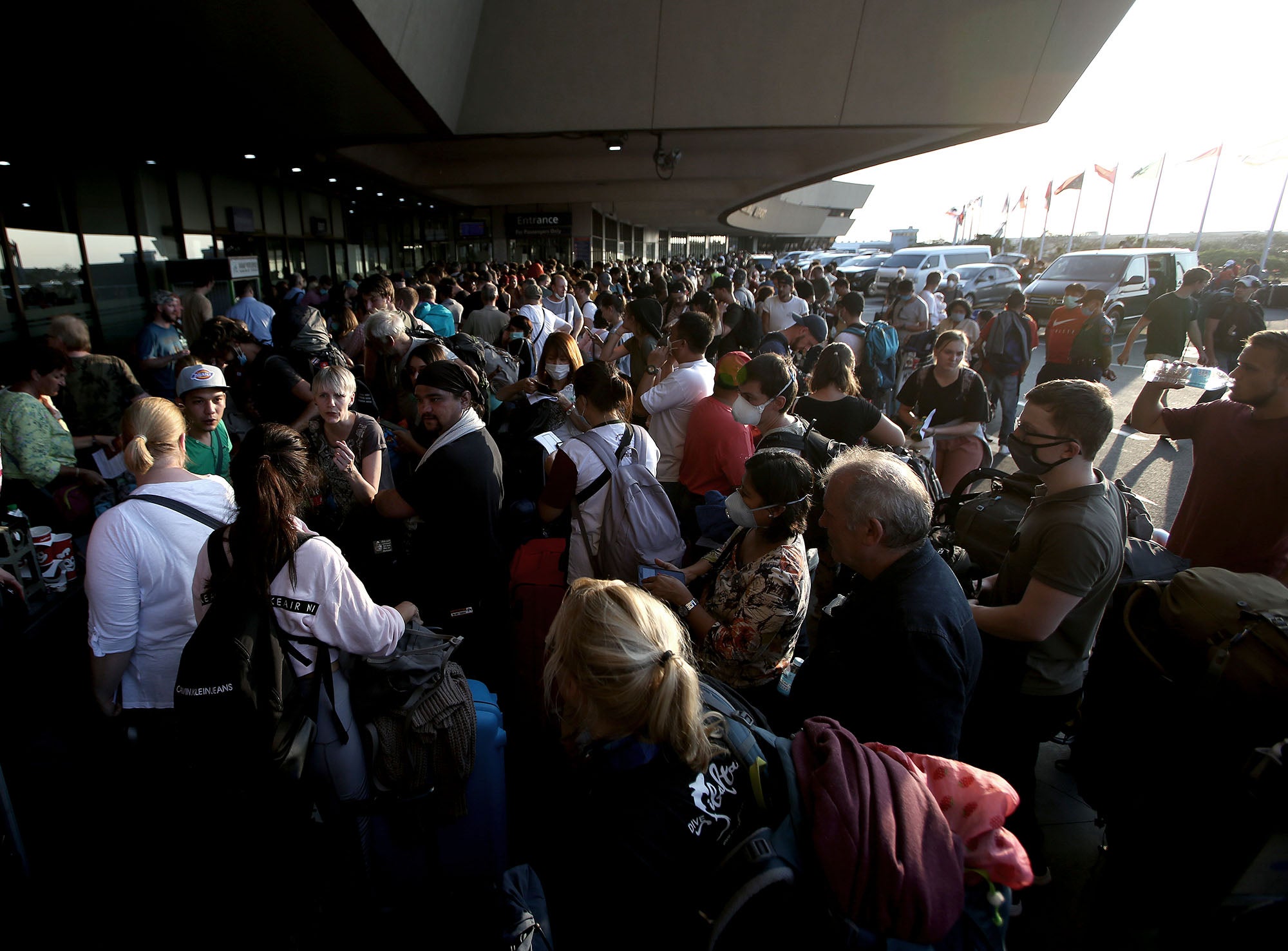 GOODBYE, PHILIPPINES Scores of foreigners leaving the Philippines crowd the entrance to Terminal 1 of Ninoy Aquino International Airport on Thursday, the day Manila announced all foreign visitors will be barred from entering the country. —RICHARD A. REYES

In another move by the government to control the spread of the new coronavirus in the Philippines, Foreign Secretary Teodoro Locsin Jr. announced on Twitter that all foreigners—with “no exceptions”—would be barred from entering the country on Thursday, the same day the ban was to take effect.

There was no immediate confirmation of the ban from the Inter-Agency Task Force on the Management of Emerging Infectious Diseases (IATF-EID), which Malacañang had designated as the main body in charge of all policies related to containing the spread of SARS-CoV-2, the virus that causes the pneumonia-like disease COVID-19.

In a series of tweets on Thursday afternoon, Locsin said he had suspended the issuance of visas and visa-free privileges worldwide to keep foreigners out of the country during the “enhanced” community quarantine on Luzon until April 12.

He also ordered the cancellation of all visas already issued to foreigners, except for foreign spouses and children of Filipino citizens.

“We are stopping the issuance of visas from all posts abroad and here. This goes one imperative step forward: a total ban on incoming foreign visitors of all nationalities no exceptions,” Locsin said.

It was not immediately clear if foreign diplomats were covered by the ban.

No order at Naia

At Ninoy Aquino International Airport (Naia), immigration officers continued to allow arriving foreigners to enter the country as of early evening on Thursday.

Dana Sandoval, the Bureau of Immigration (BI) spokesperson, said the decision to bar foreigners was “a matter of foreign policy.”

“We’re on standby and are ready to implement (Locsin’s order) upon receipt of the directive,” she told the Inquirer. “Matters of foreign policy are decided by the [Department of Foreign Affairs]. Policies on visas that BI implements stem from DFA circulars.”

The government has been flip-flopping on its travel bans as it tries to cope with the coronavirus outbreak.

Late on Sunday night, the IATF-EID gave overseas Filipino workers (OFWs) and foreigners scheduled to depart 72 hours to fly out.

The announcement prompted scores of frantic travelers to mob airline ticket offices days later to rebook their flights so they could leave the country in time to beat that 72-hour deadline of 11:59 p.m. on Thursday.

The scramble for airline seats was aggravated by the flight cancellations made by airlines themselves. Foreign embassies helped their stranded nationals get special flights out of the country.

On Tuesday night, the IATF-EID withdrew that order and assured foreigners and OFWs that they could fly out anytime during the lockdown, but it continued to bar Filipino tourists from leaving the country.

It also allowed all foreigners to enter the country, but maintained previous restrictions, including outright ban or mandatory quarantine, particularly on visitors from Italy, Iran, China, Hong Kong, Macau and parts of South Korea.

Locsin said the government should give foreign visitors “all the help to get out” of the country.

“Idiotic to detain them,” he tweeted.

With the lifting of the 72-hour window, flag carrier Philippine Airlines (PAL) said it was considering resuming international flights in the coming days.

PAL mounted what were supposed to be its last international flights under the 72-hour window on Thursday.

The airline also launched “sweeper,” or special domestic flights, between Cebu and Manila to carry foreigners who needed to catch flights to their home countries.

The final decision, she said, would depend on whether the company, its service providers and the authorities “can overcome increasing challenges, including the difficulty of securing enough manpower at the airports to support these operations given quarantine restrictions, and a growing series of travel bans and restrictions imposed by various countries.”

She said the airline was extending full free rebooking privileges to all passengers who were booked on any flight during the quarantine from March 15 and beyond up to April 30.

Any applicable fare difference is waived for passengers flying on the same cabin class on their rebooked flight, she added.

The free rebooking and fare difference waiver privileges are also extended to passengers on flights from outside the March 15-April 30 period who are prevented from traveling due to government-imposed travel bans, quarantines or flight cancellations due to COVID-19. —WITH REPORTS FROM JEROME ANING AND TINA G. SANTOS