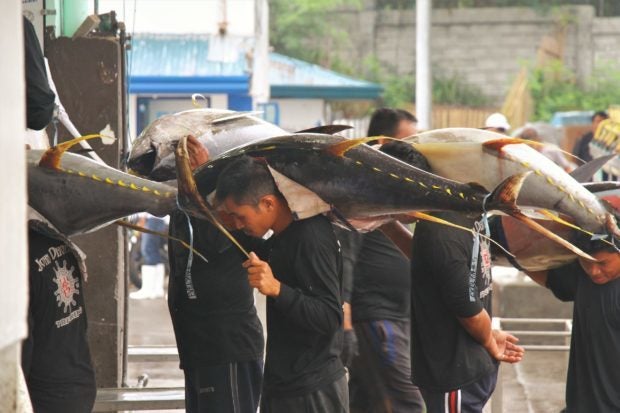 TUNA CAPITAL Workers at General Santos City Fish Port Complex wait their turn at a tuna weighing station set up by a fish trader. General Santos is considered the country’s “tuna capital,” where at least 250,000 metric tons of fish and tuna are unloaded at the local fish port each year. —ROMMEL REBOLLIDO

GENERAL SANTOS CITY, South Cotabato, Philippines — This vital economic hub in Mindanao is bracing for a beating as its major trade commodity, tuna, is cut off the export route with the cancellation of flights to Metro Manila as part of the community quarantine imposed by President Duterte in Luzon.

Mayor Ronnel Rivera said if the industry would fail to find an alternative platform for exporting tuna, without passing through Metro Manila, a local economic meltdown could ensue as more than 200,000 residents are dependent on the tuna industry for their livelihood and income.

The local tuna industry, which employs almost 30,000 workers, depends much on air transport in exporting fresh tuna through Metro Manila.

“With Manila cut off from us via air, land, and sea, businessmen are looking into options on how such a situation can have minimal effect on the industry,” said Elmer Catulpos, president of the General Santos City Chamber of Commerce and Industry Inc.

Tuna exporters target the arrival of the commodity to its foreign customers before nightfall, meaning the fresh catch unloaded in the city in the morning should be in international flights to Asian cities by midday. Japan is the major destination of General Santos’ tuna exports.

Over 80 percent of fish unloaded at the General Santos fish port are tuna. Some 5 metric tons of tuna are shipped from here daily.

A briefer by the Food and Agriculture Office (FAO) of the United Nations says the Philippine fishing industry contributes an estimated 1.8 percent to the gross domestic product.

Of fish and fishery exports valued at $1.2 billion in 2013, tuna was the top export commodity, followed by shrimp and prawns, the FAO document said.

Rivera said precautionary measures against the new coronavirus disease (COVID-19) were in place, stressing that the “safety of everyone is of primary concern for now.”On Monday, the mayor ordered the closure of the General Santos City airport and seaport as part of several other measures aimed at preventing the spread of COVID-19.

He also ordered the temporary shutdown of recreational facilities like bingo and bowling centers, bars, cockpits, cinemas and arcade shops.

Rivera also stopped the “disembarkation and embarkation” of crew members at Makar Wharf operated by the Philippine Ports Authority and the General Santos City Fish Port Complex. The order covers other private ports.