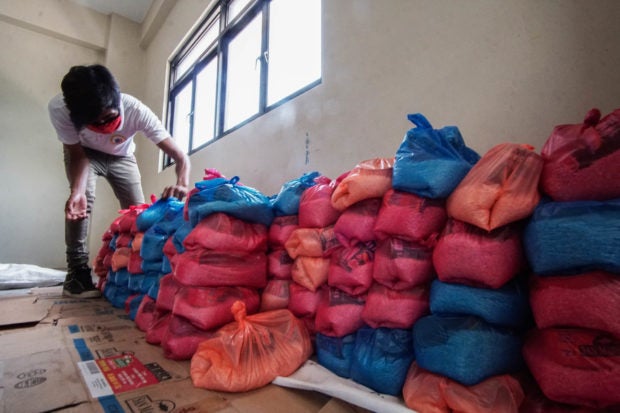 The Luzon-wide community quarantine has stirred uncertainties among villagers in different provinces, most of them worried about their diminishing food stocks while forced to stay home as the government implements measures to contain the spread of the new coronavirus disease (COVID-19).

“It’s not the virus that will kill us but the shortage of food. Many of us will lose our minds because of this unrest,” a resident in Olongapo City told the Inquirer.

Some people have started inquiring from their village officials about the government’s plan to feed them for a month while the enhanced community quarantine is in effect.

In a radio interview on Tuesday, Interior Secretary Eduardo Año directed all local government units in Luzon, particularly barangay councils, to provide for the needs of their constituents during the enhanced community quarantine.

He said checkpoints manned by the Philippine National Police, the Armed Forces of the Philippines, the Philippine Coast Guard, and the Bureau of Fire Protection would no longer be concentrated on the entry or exit points of Metro Manila since the quarantine covered the entire Luzon.

“This is really a total lockdown. Enhanced community quarantine is a medical term which is hard to understand. So for everyone to easily understand, [this is a] total lockdown. Everyone must stay in their homes, even up to 30 days, to wipe out the virus,” Año said.

In Pangasinan province, Bued village chair Carlito Dion of Calasiao town said providing the needs of all residents would be challenging as more than 100 persons under monitoring (PUMs) were listed in their community. They came mostly from Metro Manila, Dion said.

On Tuesday, Pampanga Gov. Dennis Pineda met with farmers’ cooperatives and associations which agreed to sell their crops within the province.

Mayors in the province have also intensified price monitoring and control in municipal public markets.In Benguet province, the Office of the Civil Defense (OCD)-Cordillera assured the public of enough food packs for distribution to villages.

Albert Mogul, the OCD regional director, said the food aid being prepared by the Department of Social Welfare and Development would augment the food supplies.In Rizal province, the municipal government of Cainta began rationing food to residents, whose daily income was disrupted by the quarantine and travel restrictions.

Food stubs were given out daily to each household.

But given the diminishing stockpile and limited government funds, Mayor Johnielle Keith Nieto said the town could only afford to give one set of meal—rice and viand—per household daily.

“The idea is for no one to go sleep at night with an empty stomach,” he said.

Unemployed and informal workers, like tricycle and jeepney drivers forced off the streets by the suspension of public transportation, were the priority.

“These are people [living a] hand-to-mouth existence,” Nieto said in a phone interview on Wednesday.

On a daily average, he said, they could provide stubs for 1,500 families per village. Cainta has 300,000 residents in seven villages.

Since last week, Cainta has been giving out soap bars and has set up an alcohol-refilling station.

Nieto said they bought 5,000 bottles of antiseptic gargle, which would be available for residents as long as they bring their cups or containers.

“We ask them to gargle right there and then in a designated sink) to make sure no one takes home (the mouthwash),” Nieto said.

He said there would be no free transportation “as that would only encourage to go out when what we want is to keep them home.”

In Sorsogon province, the provincial government would distribute a hundred tons of herring (tamban) to poor families affected by the quarantine.

“We will rent jeepneys on rotation basis to at least help [drivers] because their primary source of income was affected by the shutdown of mass transportation,” Mendoza said.

Vans will also be rented as service vehicles of health workers in government hospitals, he said.

In an executive order, Gov. Francis Escudero authorized jeepneys and tricycles to travel under a point-to-point scheme to ferry people buying essential goods and availing of services.

Village officials were told to designate pickup points in their areas.