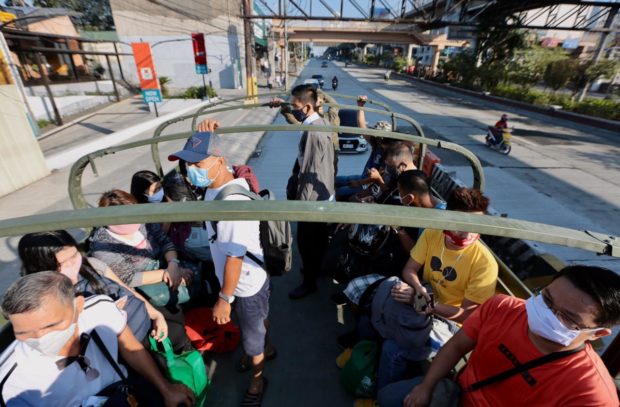 A military truck picks up passengers along EDSA on Wednesday, March 18, 2020, on the second day of the Luzon wide enhanced community quarantine to curb the spread of the coronavirus. The president declared a nationwide state of calamity as a result of the worsening spread of CoVid 19.-INQUIRER/GRIG C. MONTEGRANDE

MANILA, Philippines — The Armed Forces of the Philippines has deployed its trucks and buses to help transport health workers and employees of essential services in Metro Manila who were stranded due to the enhanced community quarantine in Luzon.

“Aside from the checkpoint operations, we also provided transport assistance starting yesterday (March 17) because we have monitored that there were stranded medical personnel and even doctors,” Army chief Lt. Gen. Gilbert Gapay said in an interview with DZBB on Wednesday.

Part of the enforced community quarantine that was implemented midnight March 17 required the suspension of mass transport to be able to restrict the movement of people and curb the spread of the novel coronavirus.

But the absence of public transport on Tuesday morning left many workers that were exempted from the quarantine—such as health workers and employees of establishments providing basic commodities—stranded and forcing them to walk several kilometers to reach their destinations.

Another 9 trucks took workers from EDSA-Santolan to Masinag in Antipolo, and vice versa.

More routes were added on Wednesday.

“We will adjust as necessary to be able to ferry the most who need,” he said.

Gapay said those who would avail the free ride would need to present their ID as proof that they are covered by the lockdown exemptions.

Before boarding the vehicles, the passengers would also undergo a temperature check.

The Office of the Vice President, Philippine Coast Guard and other local governments have also deployed vehicles to transport commuters exempted by the Luzon-wide quarantine.

President Rodrigo Duterte placed the entire island of Luzon under an enhanced community quarantine on Tuesday (March 17), to contain the rapidly spreading coronavirus. It will last until April 12.

The disease has so far left 14 dead and six recovered, with more than 180 confirmed cases.