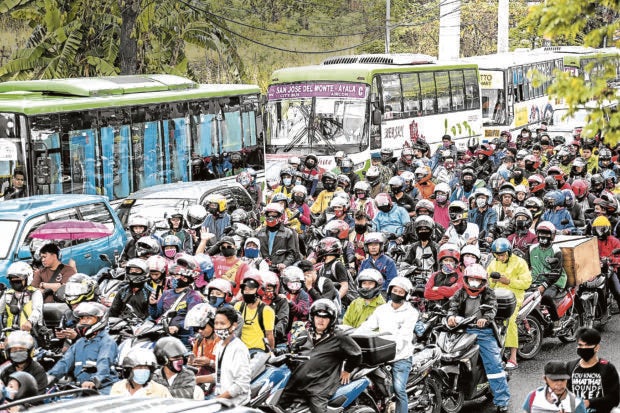 DELAY Vehicles and commuters form a huge crowd at a checkpoint at the boundary of San Jose del Monte, Bulacan, and North Caloocan, detained by procedures to clear travelers on the first working day that Metro Manila is placed under community quarantine. —JAM STA. ROSA

SAN PEDRO CITY, Laguna, Philippines —“Hurry up, we’re getting hungry!” a female passenger barked from a bus at the checkpoint on the border between Laguna province and Metro Manila.

“Look at that long line behind us!” another passenger shouted, pointing to the kilometers-long tailback. The policemen at the checkpoint paid no attention. They went on checking the temperatures of hundreds of travelers—with their two thermal scanners, one for motorcyclists and people on foot, and the other for commuters on jeepneys and buses, private motorists and truck drivers.

It was the first day of the monthlong “community qua¬rantine” of Metro Manila, imposed by President Duterte to contain the spread of the new coronavirus. But since it wasn’t really a lockdown, people went about their daily business as usual and despite reports of a bug sickening and killing people in Metro Manila, rode to their jobs in the metropolis.

The checkpoint at the boundary between San Pedro City in Laguna and Muntinlupa City in the metropolis was a hassle, but no one was stopped.

“In the morning, we checked for IDs. But by noon, we didn’t anymore. We assumed they have an important business to do [in Manila], otherwise why would they go through this [congestion]?” a police officer said as he took temperatures with his scanner.

The officer then handed the scanner to a colleague and walked to a corner for a few minutes’ rest.

“We’ll be here until 8 (p.m.),” another officer said, referring to the 12-hour shifts at the checkpoint.

On the south side of the highway leading to Laguna, local police and staff from the San Pedro City health office also manned a checkpoint. As people cleared the temperature check, a health officer stuck a piece of glued paper on their sleeves as “proof” that they went through and passed the screening.

“We might use a [sticker of different color] tomorrow,” the health officer said. Nearby was a tent where health officers questioned people whose temperature was above 38 degrees.

An ambulance stood by, ready to rush people with symptoms of the coronavirus disease to the hospital. Along the stretch of Marcos Highway leading to Cainta, on the metropolitan border to the east, Army soldiers and staff from the Department of Health flagged down vehicles at a checkpoint to screen people for temperature and check their identification cards and work permits.

The government recommended social distancing, but the checkpoint officers were helpless to make people observe that, especially travelers riding pillion on motorcycles and on the few buses and jeepneys that refused to run half-full. Ronald Balladares, who works at a fruit juice factory in Cubao, Quezon City, missed work on the first day of the quarantine because he could not get a ride.

“We attempted to go to Cubao, but most of us would have to fall in a long line for temperature check. There are few public vehicles. Even tricycles that normally carry four people could only carry two,” Balladares said.

“It’s safer not to go out. But if we do not go out, we will not eat,” he added, echoing the reason of most people who took to the road on Monday despite the coronavirus threat. For Jay, who works at a media monitoring company in Pasig City, the checkpoints were unnecessary.

“To be frank, I don’t see the point of [setting up checkpoints at the border]. So what are the military officials doing there? Just standing around and causing traffic jams,” he told the Inquirer.

Police at checkpoints were strict about the meter distance between passengers guideline laid down by the Department of Transportation, which did not consider the size of public utility vehicles and the cost of trips to drivers and operators. For taxis and ride-hailing cars such as Grab, there should be only four people, including the driver.

For UV Express vans, only five passengers are allowed and they should be one seat apart. Jeepneys should carry only half of their normal capacity, with passengers one space from each other.

There’s no mention of fuel cost and boundary. Buses can carry only 25 people, including the driver and conductor. The passengers should also be one seat apart. No straphangers are allowed. —WITH REPORTS FROM JODEE A. AGONCILLO, DEXTER CABALZA AND MEG ADONIS INQ