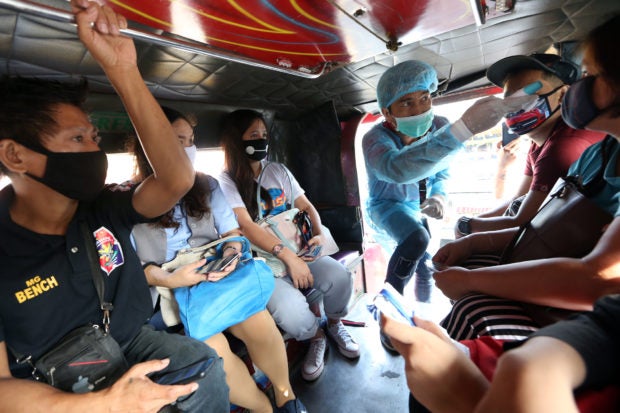 FEVER CHECK A barangay personnel uses a forehead thermometer to check the temperature of passengers in a jeepney passing through a checkpoint at the boundary of San Mateo, Rizal, and Marikina City on Sunday. —NIÑO JESUS ORBETA

MANILA, Philippines — Manila became the first city in Metro Manila to announce the implementation of a curfew, starting from 8 p.m. on Sunday until 5 a.m. the following day, as part of efforts to contain the spread of the novel coronavirus disease (COVID-19).

Muntinlupa and Navotas cities were set to follow suit today. However, the interior department said that even under a state of public health emergency, the local ordinances authorizing a curfew could not be enforced immediately.

“The ordinance needs to be published and can only be enforced 15 days after the required publication. That’s under the Local Government Code,” Department of the Interior and Local Government (DILG) spokesperson Jonathan Malaya said on Sunday.

He noted that it would have been a different matter if the curfew was a directive of President Duterte or the Interagency Task Force on Emerging Infectious Diseases.

“That [curfew] would have been immediately enforceable in light of the state of public health emergency,” he said.

On Saturday, the Metro Manila Council composed of the 17 Metro mayors passed Resolution No. 11, series of 2020, “urging all local legislative councils of the National Capital Region to issue an ordinance declaring a city or municipality-wide curfew due to COVID-19.”

Malaya cited the case of Makati Mayor Abby Binay who issued an executive order outlining steps to stop the virus, including the imposition of a citywide curfew.

As for other localities which had passed ordinances, “they will be enforced although it will take some time,” Malaya said.

Manila chief of staff Cesar Chavez later clarified that the ordinance would take effect on Thursday, three days after its publication.

The curfew ordinance was approved after the city council held a special session on Saturday, a day before the National Capital Region was placed under community quarantine.

Mayor Francisco “Isko Moreno” Domagoso, however, clarified that those purchasing food, essential basic necessities and prime commodities, as well as those traveling to and from work would be exempted.

“The purpose of this ordinance is to keep you away from harm and [the] high probability that we transfer the disease to one another,” he said.

In a live broadcast late on Saturday, Domagoso said that affected residents would need to show some proof of employment to officials tasked to enforce the ordinance.

“You could also ask your office’s HR (human resources) department to [give you a document] to confirm that you are on the streets late at night due to work. Do not forget to bring identification cards,” he added.

Ordinance No. 8616 covers all residents of Manila and authorizes barangay chairs, members of the barangay council and on-duty barangay “tanod” (watchmen) to implement the curfew. Section 5 of the ordinance imposes a fine of not more than P5,000 on any offender, with possible imprisonment of up to a month. They would be taken immediately to their house by the apprehending official. In the case of minors, their family or guardian would be contacted.

The homeless, abandoned and neglected, on the other hand, would be placed under the custody of the Manila Department of Social Welfare within 24 hours of apprehension.

After undergoing self-quarantine due to a recent business trip to the United Kingdom, Domagoso and Chavez both tested negative for COVID-19, the Public Information Office confirmed on Sunday.

Also not covered were those delivering basic necessities like food and medicine, drivers of public utility vehicles, and peace and order personnel at the city or barangay level. Emergency cases, as determined by the city traffic bureau, were also exempted.

Although they would not be arrested, violators must pay a fine ranging from P1,000 to P5,000.

Police and barangay officials, including other deputized personnel found to be abusing the ordinance, would also be penalized under existing laws.

“Muntinlupa is strategically located as the southern gateway to Metro Manila, and due to the volume of people coming in and out of the city, most especially from the Calabarzon area, this curfew ordinance becomes more urgent and necessary to contain the spread of the virus,” the ordinance read.

Navotas’ City Ordinance No. 2020-06, on the other hand, exempted from the curfew people traveling for work, medical and humanitarian reasons; those going to the airport for international travel; health workers; those working in trade and/or delivering raw materials, food products or supplies; and authorized local government officials and personnel, among others. Restaurants, pubs and bars serving alcohol or offering videoke; supermarkets; pharmacies; clinics and banks, however, were expected to comply with the curfew.