Businesses brace for tough times ahead in wake of coronavirus scare
By the Inquirer Bureaus / 05:10 AM March 14, 2020 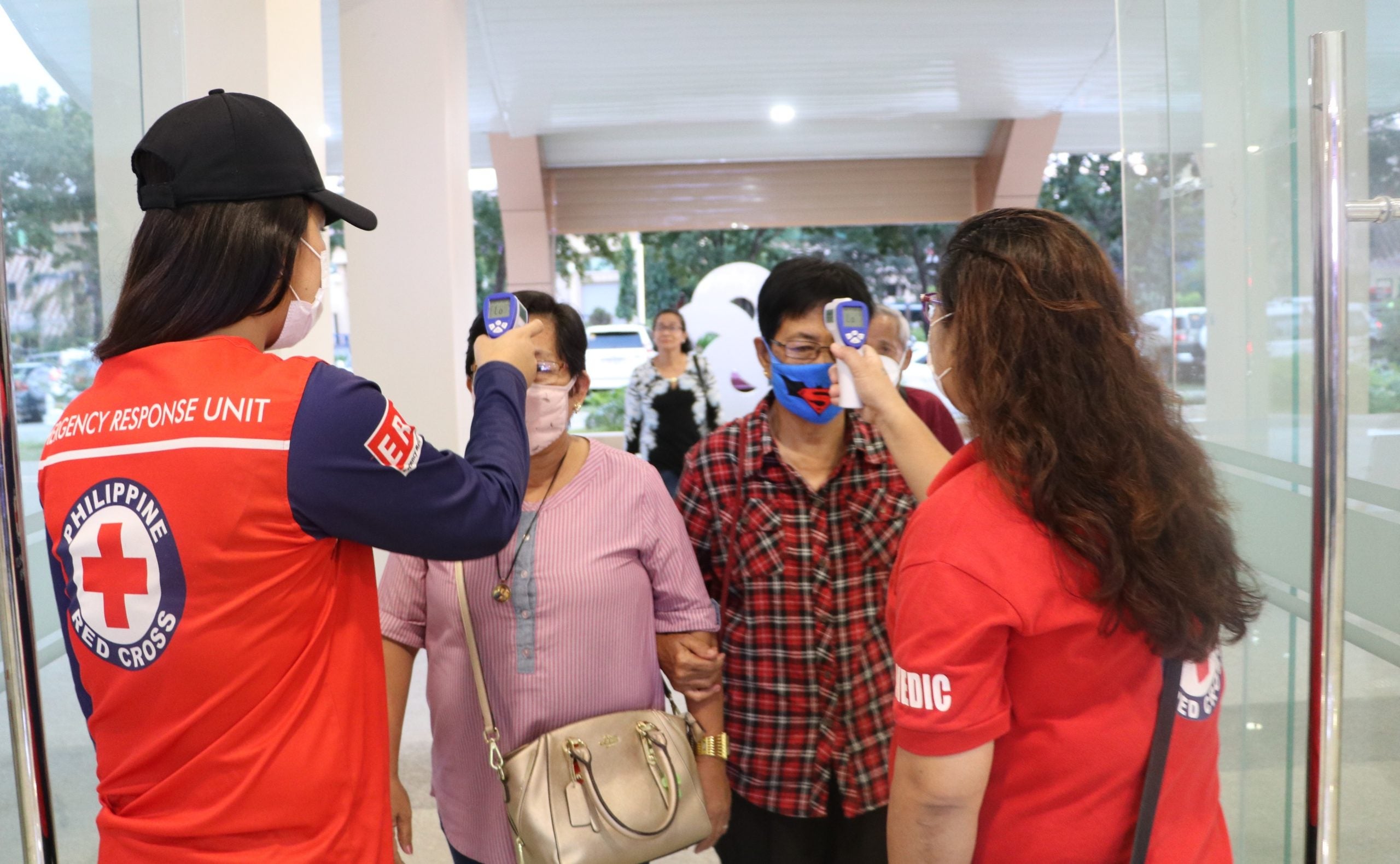 Some local government units (LGUs) on Friday put their areas in a “community quarantine” to contain the spread of the new coronavirus disease (COVID-19), a day after President Duterte ordered for a similar setup in Metro Manila.

Policemen in Cainta, Rizal province, have been deployed to man checkpoints to start the town’s localized quarantine on Sunday, the same time it takes effect in Metro Manila.

Two COVID-19 patients from Cainta, a couple from Filinvest East subdivision in Barangay San Isidro, had died this week. A third patient, a nurse from Barangay San Andres, had better chances of recovery, according to Mayor Johnielle Keith Nieto.

Cainta, a gateway to other towns and a city in Rizal, has at least 20,000 residents traveling every day for work or school to Metro Manila.

Nieto said they had started stockpiling food, water and medical supplies to sustain a community of 300,000 over the next month.

According to him, residents, who will have to report for work in Metro Manila or outside Cainta, will be allowed to leave and return home.

Curfew at 6 p.m. will be imposed for minors. Nonresidents will be allowed, depending on their purpose, but they will undergo thermal scanning and other precautionary measures at checkpoints.

In Bohol, Gov. Arthur Yap announced on Friday that the province would be placed under community quarantine from March 16 to 20 to allow officials to install measures against COVID-19.

He said, however, it is “not a lockdown since people will be allowed to leave if they want.”

Resort owners on Panglao Island, Bohol’s tourism jewel, are bracing for tough times ahead especially that they rely on local tourists to boost sales during summer months, following the drop of foreign arrivals due to COVID-19.

In Negros Oriental, Gov. Roel Degamo told the mayors of towns and cities located on the outskirts of the province to check those who would be coming into the province.

Temperature of passengers would be checked before they would be allowed to board buses in terminals that served as entry points to the capital city of Dumaguete.

In Bacolod City, businessmen are finding ways to keep their businesses afloat in the face of a community quarantine in Metro Manila.

“All businesses will be affected by this lockdown—from big to small ones. The economy will slow down and we’re just praying that this will only be up to April and by May everything will slowly return to normal, he said.

Businessmen in Tacloban City shared the same sentiment, saying it would affect the number of tourists in Eastern Visayas. “On Thursday, we received cancellation of bookings which included a group of Japanese nationals,” said Neil Benedict Montejo whose family owns the Hotel Alejandro and the Hotel Lorenza. 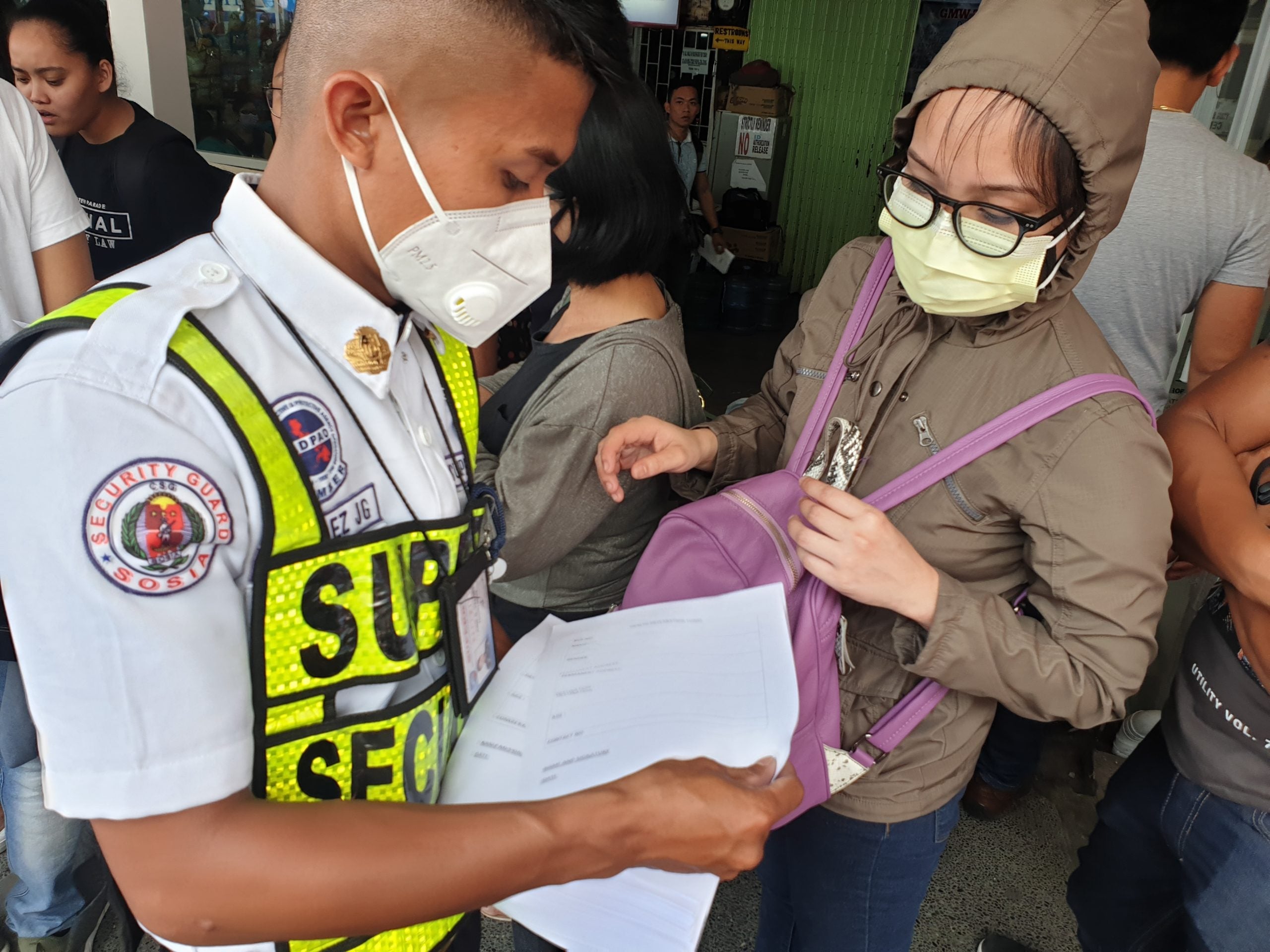 “HEALTH CHECK Passengers in a bus station in Baguio City are asked to sign a health declaration form before boarding buses as precaution against COVID-19. —Valerie Damian”

Dumaguete Mayor Felipe Antonio Remollo ordered the suspension of classes in all levels and prohibited all forms of public gatherings and events starting on Friday.

Negros Oriental State University president Joel Limson ordered a five-day suspension of work and classes while Saint Paul University also suspended classes and work indefinitely to pave the way for a “lockdown and disinfection” on campus.

Close to 40 businesses in Central Visayas have resorted to a flexible work schedule, rotation of workers and forced leave arrangements for their employees to minimize their operating expenses.

At least 64 workers in Cebu province had also been displaced following the temporary closure of two establishments due to the virus outbreak.

In Baguio City, hospitals have stopped admitting new patients to reserve more rooms for COVID-19 cases, but testing kits have not yet been sent to the Baguio General Hospital and Medical Center, which has been tasked to determine who have been infected.

At least 12 patients under investigation, or PUI, have been recorded by the Department of Health in Cordillera, although four of them have tested negative for COVID-19 infection.

In Pangasinan, Gov. Amado Espino III on Friday asked mayors to cancel all town fiestas to prevent the virus from entering the province as these events draw crowds.

Earlier, the provincial board passed a resolution canceling village fiestas in the entire province.

In Isabela province, the provincial board declared a state of calamity on Friday due to the growing threat of COVID-19 and rising cases of African swine fever.