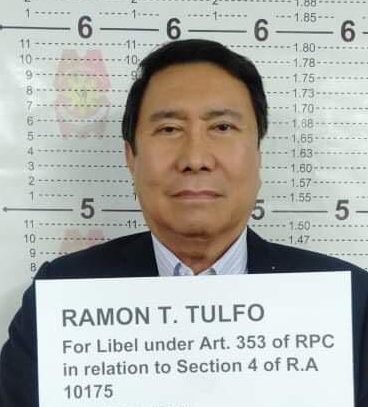 Radio broadcaster and columnist Ramon Tulfo surrenders to police on Friday, March 13, 2020, after two Manila courts released warrants of arrest against him over cyberlibel cases. (Photo from MPD)

MANILA, Philippines — Radio broadcaster and columnist Ramon Tulfo voluntarily surrendered to the police on Friday after two Manila courts released warrants of arrest against him over cyberlibel cases.

A police report showed the 73-year-old broadcaster turned himself in at the Manila Police District’s Special Mayor’s Reaction Team office at about 12 noon.

He was assisted by his lawyer when he surrendered to the police.

According to police, one of the warrants of arrest against Tulfo was issued by Rainelda Estacio-Montesa, presiding judge of the Manila Regional Trial Court Branch 46, for the crime of libel under Article 353 of the Revised Penal Code in relation to Section 4 (C) of Republic Act No. 10175 or the Cybercrime Prevention Act of 2012.

Another warrant for the same crime was issued by Danilo Leyva, acting presiding judge of the Manila Regional Trial Court Branch 10.

Upon his surrender, Tulfo posted bail for the charges and was later released from police custody, according to Ibay.

Police have yet to provide details on which issue the libel cases stemmed from as of posting time.