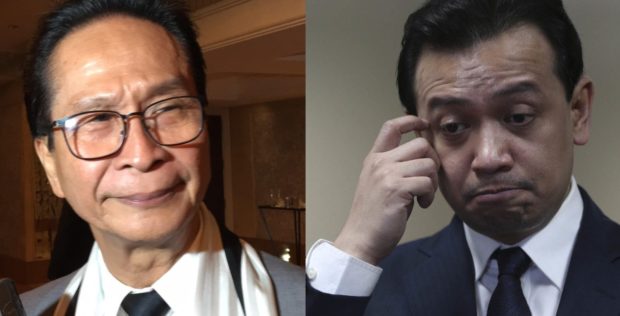 “I don’t waste time responding to nonsense especially coming from a discredited former senator and a shameless rebel,” Panelo told INQUIRER.net in a text message.

Trillanes earlier criticized Duterte for displaying “incompentence” when he faced before the media to address the COVID-19 outbreak that the country is facing.

The President on Monday night answered questions from the press on the coronavirus threat after meeting with Metro Manila mayors and members of the Inter-Agency Task Force (IATF) on Emerging Infectious Diseases.

Duterte, during a press conference, announced a week-long class suspension in Metro Manila from March 10 to March 14.

He also rejected the idea to place the metropolis under a lockdown, saying it was “too early” for such measure.

The meeting came hours after Duterte declared a state of public health emergency over the virus’ threat.

As of Wednesday, there are 33 confirmed coronavirus cases in the country.

COVID-19 is a respiratory disease that emerged in Wuhan of Hubei province in China. The International Committee on Taxonomy of Viruses named the novel coronavirus as SARS-CoV-2.