That ‘fucking country’ briefing: Did Duterte manage to assure Pinoys? 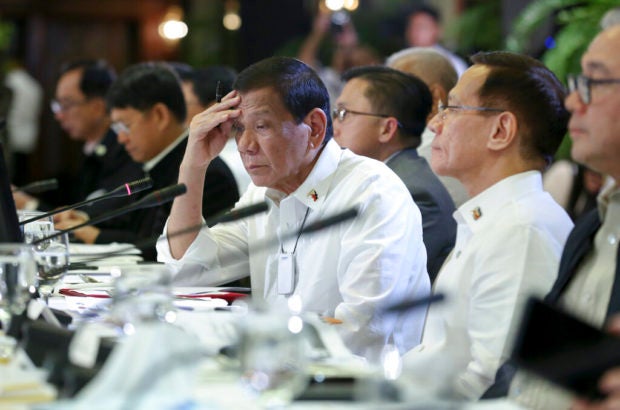 In this March 9, 2020, photo provided by the Malacanang Presidential Photographers Division, Philippine President Rodrigo Duterte, center, listens during a meeting with the Inter-Agency Task Force for the Management of Emerging Infectious Diseases at the Malacanang Palace in Manila, Philippines. Duterte has declared a state of public health emergency throughout the country after health officials confirmed over the weekend the first local transmission of the new coronavirus. (Albert Alcain/Malacanang Presidential Photographers Division via AP)

MANILA, Philippines — His appearance was intended to ease fears over the pneumonia-like disease COVID-19, but President Rodrigo Duterte may have failed to reassure Filipinos that his administration could handle the public health threat or that he was “on top of the situation,” as officials are wont to declare during an emergency.

The President’s “rambling, divisive” statements when he faced the media on Monday night, supposedly to abate the public’s concern over the spread of SARS-CoV-2, the virus that causes COVID-19, was lamentable, according to political analysts.

Duterte’s reference to the Philippines as a “fucking country” drew strong criticism, including from commentators online, as an “unpresidential” remark that was inappropriate for a nation in crisis.

“It’s like he has something against the country. It’s the ‘F’ word. He has always said that he’s patriotic, but there’s no best time to say it to your country. You don’t expect it from the leader of the land,” said Jean Encinas-Franco, a political science professor at the University of the Philippines.

In a phone interview, Franco said the President’s late-night statements to the press following a meeting on the COVID-19 emergency “was not reassuring.”

“During times of crisis, the role of the President is to hold the nation together. He did not do that yesterday,” she said.

Franco noted that some of the statements were “divisive” and that the public “did not get a sense” that the government was prepared for the threat to public health.

During the press briefing, Duterte announced the suspension of classes in all schools from Monday to Saturday in Metro Manila.

He also directed the police and barangay officials to serve as truant officers to monitor children who may be wandering outside their homes, and to bring them back to their parents, whom they would lecture on “the responsibilities of being a parent.”

Asked what measures would be taken to curb COVID-19’s effects on businesses and jobs, Duterte said the administration was “saving money” for those who were poor and could not work.

“I’m sure I will have something for them. I will prioritize the poor, those without food,” the President said, promising they have rice to eat, but not much more if they get COVID-19.

‘The rich are OK’

He used the occasion to turn his ire on rich people, who he said did not need the government’s help despite the coronavirus threat throughout the country.

“They do not need the police, mayors, senators because on their own, they can survive. And to think that the richest people in this country, in this fucking country, were the ones who are milking the most out of our resources,” the President said.

He said the government had the money to “defeat that son of a bitch virus,” but did not say how much.

“This will not last long. I am confident that we will survive this contagion,” he said.

Duterte compared COVID-19 to other pandemics that swept the world, like the bubonic plague and the Spanish flu.

“The so-called Roman empire. You have read the Inquisition? If you have a birthmark, you are a witch and you are burned at (the) stake,” he said.

Some people did not like that he called the Philippines a “fucking country.”

A certain Noel Escondo tweeted: “‘This fucking country…’–Duterte; I say… This fucking President!”

A Facebook page, “Samasa Kontra Mandarambong,” said the President’s press conference was a “disaster,” criticizing him for offering no solutions.

“The truth is, Duterte believes, in his own words during the press con, that the Philippines is a ‘fucking country.’ That ‘historic cleansing’ is necessary, making reference to the bubonic plague and Spanish flu that killed millions. Such careless statement only proves that he is willing to watch the country flounder and its people die off,” part of the post read.

Franco noted that the President’s off-hand remarks on the COVID-19 threat was perhaps “his way of reassuring the nation that there’s nothing to be concerned about.”

“In a crisis, you have to stem the tide of fear and uncertainty, which is often the role of the leader, to address the uncertainty. The government plays a big role here. He doesn’t have to be a doctor to do it. The leadership, the focus, the direction should come from him,” Franco said.

Maria Ela Atienza, also a political science professor, said the “fucking country” remark was “unfair to government workers who have been doing their best to deal with the health crisis.”

“If he cannot say anything specific, he should have allowed the health, economic and local government secretaries to deal with specifics. Instead, he went back to his usual ramblings,” Atienza said.