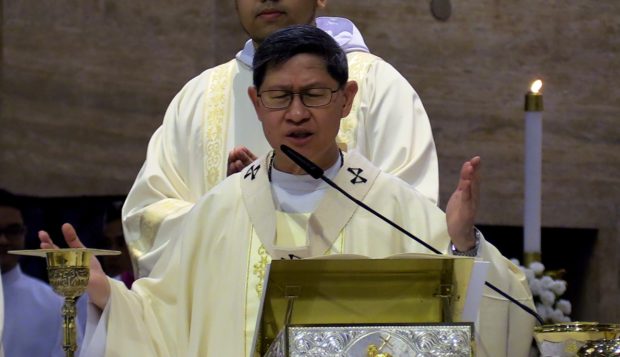 MANILA, Philippines — President Rodrigo Duterte claimed on Tuesday that Cardinal Luis Antonio G. Tagle, former archbishop of Manila, was “out” from his post when he angered Pope Francis for “meddling” in politics.

In a speech at the 2020 General Assembly of the League of Municipalities of the Philippines (LMP), Duterte alleged that Tagle was “investigated” and was replaced by an “officer in charge.”

“See, they used the money to contribute to the yellows. Look at what happened. We don’t have a bishop now. Don’t you know? He was removed. We were given a caretaker now who is a priest. Manila doesn’t have a bishop,” Duterte said, speaking partly in Filipino.

“The Pope got mad because he meddled with politics. That’s the truth. That’s why we were given an officer in charge. We don’t have a bishop. Tagle was out. He was investigated. That’s an open secret,” he added.

Tagle left his post as archbishop of Manila after he was appointed in the Vatican as prefect of the Congregation for the Evangelization of Peoples.

Bishop Broderick Pabillo now serves as the apostolic administrator of the Archdiocese of Manila, which is now considered “sede vacante,” which in Latin means “vacant seat.”

In a homily in 2018, Tagle hit bullies who abuse their power which some people interpreted as an allusion to the President’s actions. Duterte, however, said he never bullied people.

Duterte has been calling the Catholic Church “the most hypocritical” institution in the Philippines in several of his speeches.

He had drawn criticisms for his anti-Church remarks since assuming the presidency in 2016.