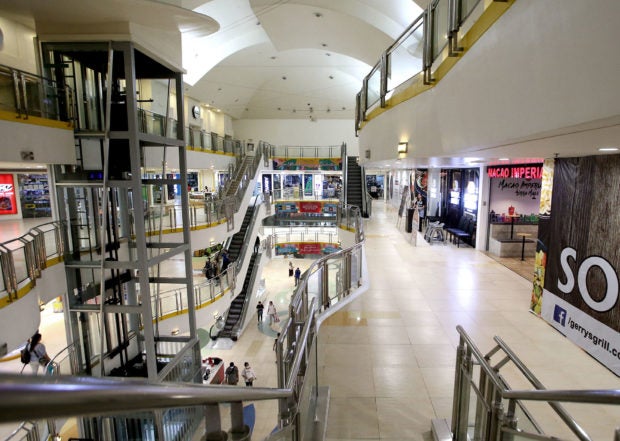 ONLY THE BRAVE Few shoppers are spotted at Greenhills Shopping Center in San Juan City on Monday, days after the Department of Health announced that the fifth confirmed coronavirus case in the country frequented the prayer hall found inside the mall. RICHARD A. REYES

MANILA, Philippines — An administration lawmaker has offered a drastic and dramatic proposal to slow and contain the spread of the novel coronavirus (COVID-19) disease: impose a weeklong lockdown on the National Capital Region (NCR) “where all the cases are.”

Albay Rep. Joey Salceda, House ways and means committee chair, said on Monday that the national government should not discount his suggestion which, among other measures, would mean school closures, work stoppage, suspension of public transport and cancellation of domestic flights.

“The lockdown of NCR should be not be off the table if needed to slow down the transmission of COVID-19,” he told reporters.

“During epidemics, everyone is a suspect, thus the need for isolation shock,” Salceda said.

He argued that the cost of mass community transmission far outweighed economic losses that might arise from such preemptive actions as a Metrowide lockdown.

President Duterte on Monday declared a public health emergency as the number of confirmed COVID-19 cases rose sharply to 20 and after the country recorded its first local transmission of the pneumonia-causing disease over the weekend.

China quarantined the city of Wuhan, where the virus originated, on Jan. 23 in hopes of keeping the outbreak under control. Italy, also badly hit by the coronavirus, will place the entire Lombardy region and 14 other provinces under lockdown, according to reports.

“The zero-casualty doctrine should extend to all emergencies, especially health emergencies,” Salceda said.

Elaborating on his proposal, he explained that classes should be suspended nationwide to slow down and mitigate daily any potential for mass transmission.

“In NCR, where all cases are, aside from no classes, there should be work stoppage for at least one week. No bus trips, no domestic flights, close [South Luzon/North Luzon expressways] and railways, and therefore, everybody in Metro Manila should have a grand staycation,” he said.

“All exceptions to the temporary entry ban to NCR would be food, medicines and health professionals,” Salceda said.

But Minority Leader Bienvenido Abante Jr. said the idea of a Metro Manila lockdown should be ruled out as “as it is the country’s economic and political center.”

The Manila lawmaker expressed openness to other strong measures, such as moving up the school calendar to allow students to begin their vacation early.

“Government and private offices should also study work-from-home arrangements and the use of skeletal staffing patterns to minimize person-to-person contact,” Abante said.

“At this point, all options should be on the table given that the NCR is the most densely populated area in the country,” he added.

Metro Manila has a total population of just over 12.8 million people with a density of 21,000 residents per square kilometer, Abante noted.

A 57-year-old Filipino from Quezon City and an 86-year-old American from Marikina City were among the new cases announced by the Department of Health on Sunday, bringing the total of confirmed cases in the country to 10. On Monday, the figure went up to 20 although no details were given.

The Quezon City resident was admitted at St. Luke’s Medical Center-Quezon City while the American was taken to The Medical City in Pasig.

Another confirmed case, a 32-year-old Filipino, was admitted at St. Luke’s Medical Center in Taguig City while the fourth, a 38-year-old Taiwanese, sought treatment at Makati Medical Center.