Gamboa rules out ‘sabotage’ as cause of chopper crash 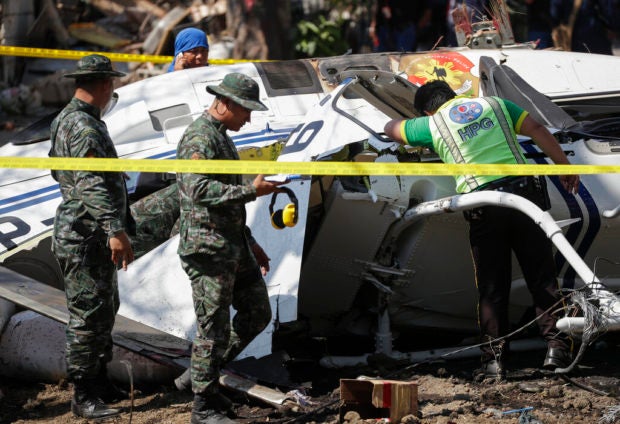 Investigators retrieve items from a police helicopter that crashed in San Pedro, Laguna province, south of Manila, Philippines Thursday, March 5, 2020. The helicopter carrying the Philippine national police chief, three generals and four people crashed Thursday after hitting a power cable in a swirl of dust as it took off, injuring those on board, police officials said. (Photo by AARON FAVILA / AP)

Last Thursday, the Bell 429 chopper that carried Gamboa and seven others crashed in San Pedro, Laguna province after it got in contact with a live wire.

“Of course, ‘yung sabotage, sinadya, I don’t believe so. Ako personally convinced ako, nandoon ako sa loob ng helicopter, nobody in his right mind, even what kind of interest he has in his mind would do that,” Gamboa told reporters in a press conference in Camp Crame.

(I don’t believe that there is sabotage. I am personally convinced that nobody in his right mind would do that.)

(The general term is an accident; it was not intended to happen by anyone involved. I strongly believe that there is no sabotage there.)

Gamboa was in San Pedro to visit the impounding site of the local Highway Patrol Group and was on his way to a command visit at Camp Vicente Lim in Calamba, Laguna when the mishap happened.

The helicopter reportedly tried to take off at a dusty portion of the area, which affected visibility.

Gamboa said he will not push through with his visit to Police Regional Office Region I as he was told to rest; however, he said he would go through with the scheduled command visit next week.

The PNP has formed a special investigation task force (SITG) to probe the incident, which is led by PNP Deputy Director for Operations Lt. Gen. Guillermo Eleazar

Eleazar earlier said the special investigation task group (SITG) formed to probe the incident is looking at whether or not there was a lapse in the standard operating procedures being observed by PNP pilots in using the agency’s aircraft.

READ: PNP chopper that crashed in Laguna has no blackbox

Read Next
Marikina City confirms first coronavirus case
EDITORS' PICK
SMDC’s Bloom Residences: A master planned community that cares for your health and wellness
COVID-19 cases in PH pass 3.2 million mark with 37,154 new cases — DOH
Over 3 Million worth of prizes to be won at Smart Padala’s SENDali Manalo Promo!
Upsilon, Unilever give ‘real talk’ on climate change crisis
What to expect as Metro Manila starts ‘no vaccination, no ride’ policy on Monday
Metro Manila’s daily COVID-19 growth rate drops to 2% — Octa Research
MOST READ
IATF protocols now apply to travelers who arrived on or before Jan. 13
‘Not my loss’: Did Kris Aquino just comment on her breakup with Mel Sarmiento?
Thailand records first Omicron death
Tito, Vic and Joey still not quitting, breaking trends as they celebrate 50th year in the biz
Don't miss out on the latest news and information.