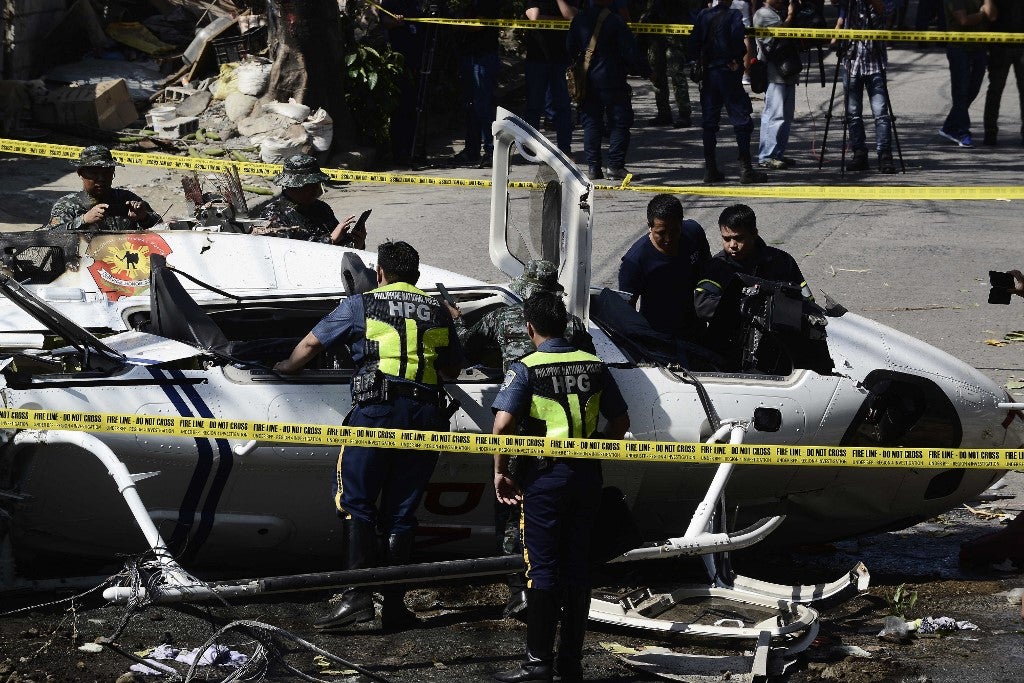 Investigators stand next to the remains of a Bell 429 helicopter, whose passengers were ranking national police generals including the chief of the national police General Archie Gamboa, after it crashed seconds after taking off in San Pedro town, Laguna province, south of Manila on March 5, 2020. – According to press reports, all the passengers were brought to the nearest hospital for treatment. Photo by DANTE PERALTA / AFP

Maj. Gen. Mariel Magaway, PNP Director for Intelligence, and Maj. Gen. Jose Maria Ramos, Director for Comptrollership, are unconscious and in are critical condition, according to Lt. Gen. Camilo Cascolan, PNP deputy director for administration, in a phone call with INQUIRER.net.

The two are confined at the Unihealth Southwoods Hospital and Medical Center in Laguna.

The information was later confirmed by Maj. General Benigno Durana, director of the PNP Directorate for Police Community Relations (DPCR) at a press conference at the  St. Luke’s Medical Center at the Bonifacio Global City (BGC) in Taguig City.

“Si General Magaway and si General Ramos ay nasa critical condition and they are being well taken care of by our doctors based in Laguna,” said Durana.

Gamboa, meanwhile, is in “good” condition, according to former PNP chief and now Sen. Ronald Dela Rosa who visited him at the St. Luke’s Medical Center. Dela Rosa and Gamboa are both graduates of the Philippine Military Academy Sinagtala Class of 1986.

Gamboa sustained a minor injury on his right shoulder.

The rest of the police officers in the chopper are in stable condition, according to Durana.