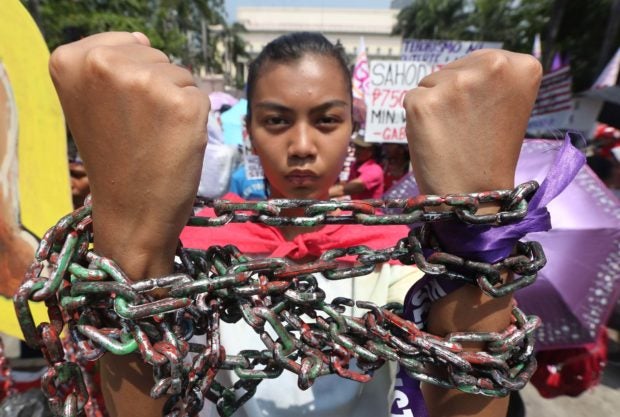 WOMEN’S RALLY A young woman depicting Inang Bayan in chains joins a rally of women’s groups in Mendiola in celebration of International Working Women’s Day on Sunday. They called for equal rights, job security and the end of subordination and discrimination.—MARIANNE BERMUDEZ

The morning heat was no match for the intensity of cries of thousands of women on International Working Women’s Day on Sunday at Liwasang Bonifacio in Manila.

Peasant workers and journalists called for gender equality in the workplace, resumption of peace talks, and an end to the harassment of farmers and militant groups.

Other rallies were conducted in places like Taytay, Rizal province, and Calamba City in Laguna province.

“It is important for the public to hear the voice of women on this day not only because the majority of the population is composed of women but also because they are farmers who experience harassment on a daily basis,” Zoe Caballero, Nnara-Youth national chair, told the Inquirer.

Caballero said peasant women would continue to belong to the more vulnerable sector, while feudalism and patriarchy reigned in the country.

The fact that the country is ruled by a President criticized by women’s groups for his sexist and misogynistic remarks, means that the Philippines would not progress in its fight for women’s rights, she said.

Nnara-Youth also demanded the release of its deputy secretary general, Karina, among the 44 activists arrested in Negros Occidental province in November 2019 on what the group said were trumped-up charges, including illegal possession of firearms and explosives.

“Karina is a woman and currently a first year college student. Due to her arrest, she can no longer go to school and continue her education. To this day, we have not received any updates about the case nor are we expecting her to be released any time soon,” Caballero said.

At the other side of Liwasang Bonifacio, journalist Lourdes Escaros narrated her experience of being verbally harassed in the newsroom.

Escaros shared that one of her bosses would yell at her and curse her for a year in the newsroom. But even as she filed a complaint a year ago in the human resources (HR) office, she had yet to receive any updates and progress reports about the case.

The vice chair of the National Union of Journalists of the Philippines (NUJP) said she did not want women like her to continue experiencing negligence in corporate offices due to their gender.

“HR offices are not enough. There must be a separate office handling women’s cases because our complaints will always be different from the complaints of men,” she said.

As Gabriela’s partner organizations began their march on Chino Roces Bridge (formerly Mendiola), a mural of President Duterte holding a pistol and a woman in chains was burned.

At Kalayaan Park in Taytay, the flash mob called “One Billion Rising” highlighted the observance of International Women’s Day.

Text quoting the President’s “misogynist” remarks were painted on the mural, such as part of his April 2019 speech in which he mentioned about “shoot(ing) in the vagina” a captured female rebel.

The activists burned the mural during the program.

Gabriela said about 500 women took part in the Taytay event, while a few more hundreds elsewhere participated in the region for the simultaneous rallies at 3 p.m.

In Laguna, the youth activist group Anakbayan held a rally at Calamba Crossing in Calamba City.

Aside from women’s rights issues, Songalia said the women were rallying against the government’s infrastructure projects viewed as threats to communities’ livelihood in south Luzon, among them the Skyway and LRT extension projects and the construction of Kaliwa Dam in Quezon and Rizal provinces.

The group also hit the proposed Anti-Terrorism Act with provisions they said may stifle democratic rights.