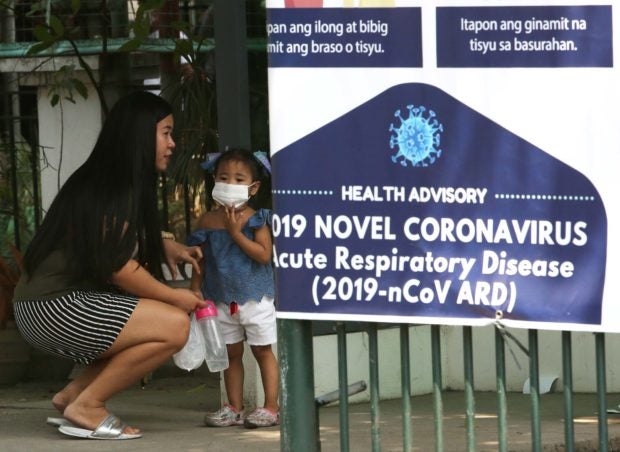 URGENT REMINDERS Tips on how to prevent the spread of the new coronavirus are posted at the entrance to San Lazaro Hospital in Manila. The Department of Health on Friday reported that for the first time two Filipinos had tested positive for the virus in the Philippines. —MARIANNE BERMUDEZ

Health Secretary Francisco Duque III said on Friday that for the first time two Filipinos in the country have tested positive for the new coronavirus disease (COVID-19), one of whom was a 62-year-old man who likely contracted the virus locally.

Duque said that the man, who has hypertension and diabetes, tested positive for the virus on Thursday after he was admitted with severe pneumonia at Cardinal Santos Medical Center (CSMC) in San Juan City four days earlier.

Also on Thursday, a 48-year-old lawyer who had traveled to Japan tested positive for COVID-19. Duque said the male patient stayed in Tokyo from Feb. 21 to Feb. 25 and was hospitalized due to chills and fever on Tuesday.

The two cases bring to five the total number of confirmed COVID-19 cases in the country. It has been 29 days since the Philippines last reported a positive case.

The first three confirmed cases were all Chinese tourists —a man and two women— from Wuhan, the city in central China identified as the epicenter of the outbreak. The man died of pneumonia and the two women recovered and have returned to China, according to the Department of Health (DOH).

Duque said the 62-year-old diabetic, who regularly worshiped at a Muslim prayer hall in Greenhills, San Juan, has been coughing with phlegm since Feb. 25.

He noted that the man has not traveled to any of the countries currently affected by the virus, which is called SARS-CoV-2.

“The absence of travel is a clear indication that this is a local case,” Duque said in a press briefing on Friday.

The two men are now being treated at the Research Institute for Tropical Medicine (RITM) in Muntinlupa City.

Assistant Health Secretary Maria Rosario Vergeire said a relative and frequent companion of the 62-year-old was also confined at the RITM after showing symptoms of the disease. His test results were not yet available.

San Juan Mayor Francis Zamora said he had already instructed the city health office to disinfect and sanitize and then temporarily close the Greenhills prayer hall, which could accommodate 400 people.

“As to when it will be opened, I informed the Greenhills Muslim Traders Association, the group that manages the prayer room, earlier that until the DOH gives the go signal for it to open, it will have to remain temporarily closed,” said Zamora.

“I informed them that this is for the safety of those in the prayer room and the rest of the city as well,” he said.

The prayer hall, the Greenhills Masjid, is “quite far from the main shopping area” and is separate from the popular shops there, Zamora said.

The city government and the DOH are now conducting contact tracing to identify who the patient, a resident of a municipality near Metro Manila, has been in contact with since he displayed COVID-19 symptoms.

CSMC, a private hospital, confirmed in a statement that it took care of the 62-year-old diabetic, who had displayed “continued presence of symptoms” associated with the disease.

The hospital also assured the public that it will prioritize the health care of its other patients and employees, as well as adhere to the “highest standards of infection management” in line with DOH guidelines and protocols.

The Greenhills Center management said it was “enacting precautionary measures” to ensure the safety of its shoppers, tenants and employees, in coordination with the DOH and the local government.

Duque, city officials and mall managers are urging those who have gone to the prayer hall and are experiencing fever or other respiratory symptoms to contact the DOH hotline (02) 8651-7800 local 1149-1150 to get proper assistance.

Duque played down concerns that there already was local transmission just because the virus had infected the 62-year-old man.

“There is no transmission so to speak as of yet because we only have one. It’s premature to say there’s local transmission,” he said. “As soon as we have more than one case that should be a reasonable consideration as a basis for saying a local transmission is happening.”

But Rabindra Abeyasinghe, the World Health Organization (WHO) representative in the country, pointed out that there already was a local transmission since “the patient has acquired the disease in the Philippines.”

Abeyasinghe clarified though that while two Filipinos in the country have tested positive, there was no evidence yet that there was widespread or community transmission of the virus.

“We don’t know the point of contact, whether it was from a foreigner, a local contact or other contaminated source. We also don’t know whether that patient has transmitted the infection to other people,” Abeyasinghe said.

Abeyasinghe also opposed the prayer hall’s temporary closure or foregoing visits there as that would be “overreacting.”

“The mere presence of one confirmed case does not mean that we need to close down the prayer hall,” he said. “Unless we have evidence that there are other infected people, there’s no evidence for us to say not to go there.”

Given the Filipinos’ penchant not to seek medical help when experiencing fever, cough or sore throat, the common symptoms of COVID-19, Abeyasinghe said it was likely that the virus was spreading in the country undetected.

“We cannot exclude it. That’s why we are urging people that if you have respiratory symptoms to isolate yourself, practice social distancing. If there are pointers which point toward the fact that you possibly have had exposure to a COVID-19 patient, you need to see a medical practitioner,” he said.

Commenting on reports that three foreigners who had tested positive for COVID-19 after their visits to the Philippines, Duque said two of them may have contracted the virus elsewhere.

He said that one of them, a 38-year-old Taiwanese man, may have contracted the virus before he arrived in the country on Feb. 28. He tested positive upon his return to Taiwan on March 3, after suffering from abdominal discomfort and diarrhea a day before.

Given that the incubation period for most of the cases is from six to seven days, it’s likely the Taiwanese man was infected before or during his trip to the Philippines, according to Abeyashinghe. “The timelines point to possible earlier infection,” he said.

A 44-year-old Japanese man who visited the country during the last week of February may have also contracted the virus in one of the four countries he had been to before arriving in Manila—Cambodia, Vietnam, Thailand and Japan. Except for Cambodia, the three other countries have reported local transmissions.

Duque said they were still getting more information on the third visitor, an Australian woman who tested positive on her return to Sydney from a three-week vacation in the Philippines.

The DOH has also reported that 88 Filipinos have been infected abroad, 80 of them aboard the cruise ship MV Diamond Princess. Half of the 42 patients who have since recovered have already returned to the country.

In the country, there are 41 patients being observed for the disease, while a total of 634 have been discharged, as of Friday.

At New Clark City, 25 of the repatriates have shown symptoms, 19 of whom have already tested negative. Fifteen of these patients have since returned to Athletes’ Village to finish their two-week quarantine, which ends March 11. —WITH A REPORT FROM MARIEJO S. RAMOS