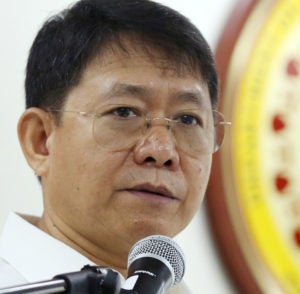 Interior Secretary Eduardo Año has ordered the Philippine National Police to investigate the alleged presence of about 3,000 members of the China’s People’s Liberation Army (PLA) who sneaked into the country by posing as Philippine online gaming operation (Pogo) workers.

In an interview on Friday, Año said part of the PNP’s task was to assess the threat that this report pose to country’s national security.

“We are having meetings with the Chinese Embassy, through their so-called military attache, and this matter is being discussed,” he said.

Año ordered the probe after an expose by Sen. Panfilo Lacson who claimed that about 3,000 members of China’s PLA are already in the Philippines, disguised as workers in the Pogo industry.

He also cited the arrest of two Chinese suspects of a shooting incident in Makati City, who were found to be in possession of PLA identification cards.

“So we’re checking if it is really true that they carried PLA IDs, and if all these information threaten our national security,” he said in a radio interview.

The Department of the Interior and Local Government chief conceded that although the country has an existing cooperation with the Chinese government on the fight against criminality, the discovery of PLA ID cards on Chinese visitors was a “new development.”

On Friday, Lacson called on various government intelligence units to look into the information he received that up to 3,000 agents of China’s PLA were on an “immersion mission” in the country.

Lacson, a former intelligence agent and retired PNP chief, said while the report he got was just an “A6” information, it was “still worth looking into.”

He shared the information after Sen. Richard Gordon raised the possibility that some of the Chinese citizens employed by Pogos could be PLA members.

Gordon, who had launched a Senate inquiry into the multimillion-dollar money-laundering racket involving Filipino and Chinese couriers, also suspected that Pogos were being used by China for espionage.

“When an issue that has serious implications, such as the reported presence of (PLA) members in the Philippines, is raised, credible information is the best way to resolve it,” Lacson said in a Viber message.

“This is without prejudice to the Philippine government’s ongoing efforts to verify such information,” he said.

Lacson said the information was provided to him by a “reliable source who had given me some accurate intelligence reports in the past.”

“It is a test all right, not of the intelligence of the Filipino people, but a test and a challenge as well to our intelligence community to verify what I said as a yet-to-be-validated information,” he said.