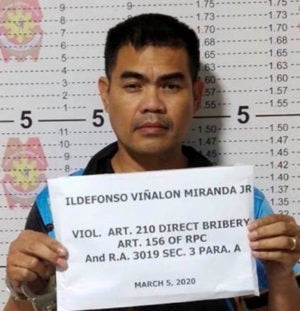 CEBU CITY — The chief of the Argao town police in Cebu province was arrested on Thursday for removing two female inmates from jail and allowing them to stay in his quarters and having sexual relations with one of them.

Agents of the Philippine National Police-Integrity Monitoring and Enforcement Group (PNP-IMEG) arrested Police Maj. Ildefonso Miranda Jr., 46, after he was caught in bed with a 23-year-old female detainee who was arrested last year on drug charges.

The other inmate was a 40-year-old woman, also booked on drug charges, who apparently served as Miranda’s errand girl.

Police Col. Ronald Lee, director of the PNP-IMEG, said he received reports that Miranda was eliciting sexual favors from a female inmate in exchange for keeping her out of jail so he placed the official under surveillance before he sent antiscalawag agents to arrest Miranda on Thursday.

The IMEG shared a video footage of the arresting team barging into Miranda’s office on the second floor of the Argao police station.

“Major Miranda and (the 23-year-old inmate) were found sleeping in one bed,” Lee said, adding that the 40-year-old woman was found fast asleep in Miranda’s office.

The video showed Miranda calmly sitting up in bed as the woman rushed to cover herself with a blanket. When the team asked her who she was, the woman answered, “detainee, sir.”

“This won’t be tolerated,” Lee told reporters at the PNP’s Camp Crame headquarters. “The two female inmates are supposed to be locked up at the police jail, not sleeping in the room of the police station commander.”

Photos retrieved from the 23-year-old’s mobile phone showed several selfie shots with the police officer, as well as one showing her saluting while wearing Miranda’s police uniform.

Lee said he had recommended to Police Brig. Gen. Albert Ignatius Ferro, Central Visayas police director, that Miranda be summarily dismissed from the service and charged with criminal offenses.

“The accused will be facing charges [of] violation of the Anti-Graft and Corrupt Practices Act, direct bribery and violation of Article 156 of the Revised Penal Code on the delivery of prisoners from jail,” Lee said.

Following his arrest, Miranda was also stripped of his PNP-issued Glock 9mm semiautomatic pistol and a Pietro Beretta handgun.