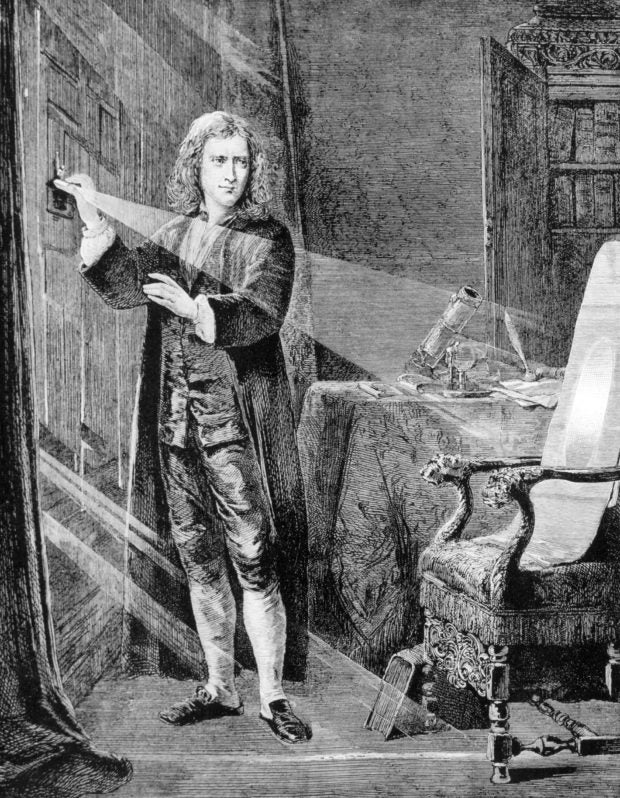 Isaac Newton was famously inspired by seeing an apple fall from a tree in his garden in Grantham, England, which sparked his elaborations of the classical laws of gravity, motion and optics. Image: Everett Historical/Shutterstock via AFP Relaxnews

A first-edition copy of Isaac Newton’s groundbreaking book laying out his three laws of motion, which became the foundation for modern physics, has been found at a library on the French island of Corsica.

Vannina Schirinsky-Schikhmatoff, director of conservation at the Fesch public heritage library in Ajaccio, said she discovered the copy of the 17th-century work while studying an index from the library’s founder Lucien Bonaparte, one of Napoleon’s brothers.

“I found the Holy Grail in the main room, hidden in the upper shelves,” she told AFP this week.

“The cover has a little damage but inside it’s in excellent condition—this is the cornerstone of modern mathematics,” she said.

The renowned physicist was famously inspired by seeing an apple fall from a tree in his garden in Grantham, England, which sparked his elaborations of the classical laws of gravity, motion and optics.

English translations were published later, but the original editions remain prized by collectors.

“A Latin edition sold for $3.7 million at an auction held by Christie’s a few years ago, and that’s the one at the Ajaccio library,” Schirinsky-Schikhmatoff said, referring to a December 2016 sale in New York to an undisclosed buyer.

It is not the first rare find at the Fesch library since an in-depth review of its holdings began a few years ago.

In 2018, Schirinsky-Schikhmatoff unveiled a “Thesaurum Hyeroglyphicorum” study of Egyptian hieroglyphics dating from 1610—some 200 years before France’s Jean-Francois Champollion deciphered parts of the Rosetta Stone. IB /ra