MANILA, Philippines — The chief-of-police in Argao town, Cebu was in hot water after he was found “sleeping” beside a 23-year-old female inmate inside his room at the municipal police station, while another female inmate was sleeping inside his office.

In a report submitted to Philippine National Police (PNP) chief Gen. Archie Gamboa, but was released to media on Friday, P/Col. Ronald Lee, acting director of the PNP-Integrity Monitoring and Enforcement Group (IMEG), identified the police official as Maj. Ildefonso Miranda Jr., who was arrested by anti-scalawag operatives in a raid Thursday.

“Major Miranda and (the female inmate) were found sleeping in one bed, while the other female inmate was deep in her slumber at the police chief’s office. This won’t be tolerated,” Lee said.

The two inmates, both facing drug charges, were arrested in separate police operations and detained at the lock-up facility of the police station. 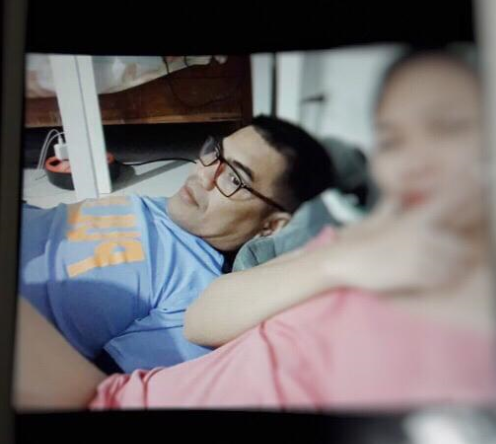 A photo of Maj. Ildefonso Miranda Jr., police chief in Argao, Cebu, beside a female inmate inside his room at the municipal police station. (Photo from PNP-IMEG)

Lee said he has recommended to Brig. Gen. Albert Ferro, director of the Central Visayas police, the conduct of summary dismissal proceedings against the accused officer.

According to Lee, operatives of PNP-IMEG Visayas Field Unit placed Miranda under surveillance after receiving reports that female detainees were staying and sleeping inside his office.

“Reports had it that the 46-year old police official is having sexual relationship with the female inmate in exchange for her privilege to sleep in his air-conditioned office,” read an IMEG report.

A photo released by the police unit also showed one of the inmates wearing a sleepwear. Another photo showed her wearing Miranda’s police uniform while on a saluting position.

The other female detainee was also tapped to be the “helper” of Miranda, according to Lee.

Police confiscated the government-issued 9mm pistol and another pistol of Miranda during the arrest.

He will face charges for violation of the Republic Act 3019 or the Anti-Graft and Corrupt Practices Act, Article 210 of the Revised Penal Code (RPC) for Direct Bribery, and Article 156 of the RPC, which imposes penalty for removing from any jail or penal establishment a detainee by means of violence, intimidation or bribery.