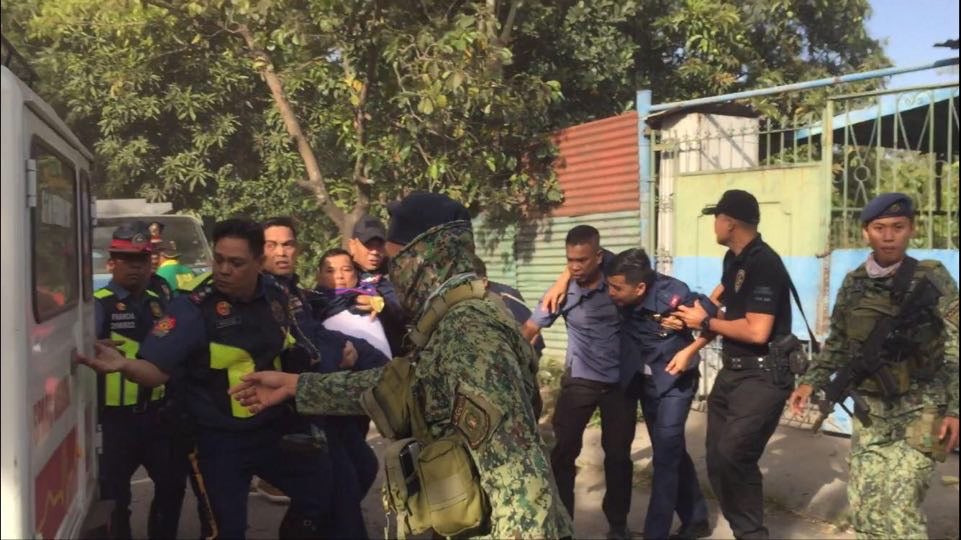 Gen. Archie Gamboa, the PNP chief, and the others were pulled from the wreckage of the Bell 429 helicopter by police officers.

Gamboa was injured in the shoulder and in the right hand but flashed a thumbs-up and said, “I’m OK,” while being wheeled to an ambulance that took him to St. Luke’s Medical Center in Taguig City, Metro Manila.

Maj. Gen. Mariel Magaway, the police intelligence director, and Maj. Gen. Jose Ma. Victor Ramos, the police director for comptrollership, were in “critical condition” as of noon Thursday, according to doctors at Unihealth Southwoods Hospital and Medical Center in Laguna.

The two slipped into a coma after sustaining injuries, mostly in the head and face.

Dr. Elvis Beldia, the hospital president, was reported as saying that Ramos had suffered a fracture in the skull and might need an operation. Magaway was transferred to Asian Medical Center in Muntinlupa City at the request of his family.

They had abrasions and scratches in the face and body and were in stable condition at St. Luke’s Medical Center, Maj. Gen. Benigno Durana Jr., acting police spokesperson, told reporters.

Gamboa’s group had just come from an inspection of a vehicle impounding area of the Highway Patrol Group at Laperal compound in Barangay San Antonio, San Pedro, and was to fly to Camp Vicente Lim for a visit to the Calabarzon police office, said Maj. Gen. Guillermo Eleazar, the police deputy chief for operations.

Eleazar, who was among the first police officers to arrive at the crash site, said the helicopter was taking off from the compound when the accident happened.

Witness Glenda Garcia said the helicopter whipped up a thick cloud of dust and volcanic ash from the Taal eruption in January, hit a power cable then crashed with a loud thud on a road near houses.

“It was really loud and we ran away in fear because we thought the helicopter would move out of control in a circle and hit us,” Garcia told The Associated Press (AP), adding that power in the village was cut due to the crash.

Witness Vilma Relatores said the helicopter’s skids got caught on the power cable.

“People were watching, some even taking videos, because we wanted to see an actual helicopter takeoff. Then it happened. We were so scared we thought it would blow up,” she said.

A motorcycle was damaged but apparently no one on the ground was hurt in the accident.

A part of the rotor blades also hit the roof of a house, Garcia and local police officials said.

Police officers who were watching as Gamboa’s group was leaving rushed to the site and pulled the group out of the wreckage.

“It just so happened the water delivery truck was around. They pulled the hose and quickly put the fire out,” Relatores said.

Brig. Gen. Vicente Danao Jr., Calabarzon police chief, said Gamboa could have been sitting “in the middle,” as he usually does on chopper trips, that’s why he was not badly injured.

Ramos and Magaway were probably seated at the left side of the chopper, which hit the hardest when the aircraft fell on the ground.

“We still couldn’t say if it was human error or [engine] failure. We would still have to investigate,” Danao said.

Barangay chief’s warningVillage chief Eugenio Ynion Jr. said he had warned the police against landing helicopters at the compound because it was “surrounded by wires.”

He said the Laperal compound was also the subject of a property dispute.

The PNP acquired the Bell 429 two years ago as part of a P435.8-million deal with Bell Textron Inc. of Texas. It was brand-new and Interior Secretary Eduardo Año, the police overseer, vouched for its dependability in an interview on television on Thursday, saying he flew on the same helicopter last month.

“It’s a Bell 429 and that is a good chopper,” Año said. “It’s the same chopper used by the [military], only a different model, Bell 412. It has a powerful engine. I was able to use this chopper and it had a good performance. I was able to ride the exact same chopper I think last month.”

Año also said the pilots were well trained and had accumulated enough flying hours. He said he observed the pilots’ performance when he flew with them.

Durana said the pilots were trained in France and in the United States.

The Civil Aviation Authority of the Philippines (CAAP) said it was willing to help the PNP in the investigation of the crash.

“If the PNP will ask for our help in the investigation, we are willing to send our crash investigators to help the PNP [determine] what might have caused the helicopter to crash,” Eric Apolonio, spokesperson for the CAAP, told reporters.

Presidential spokesperson Salvador Panelo said Malacañang was glad that Gamboa was safe and that President Duterte “most likely” would visit the PNP chief and the other police officials in the hospital.

He said the crash would not dissuade Mr. Duterte from flying to his events in helicopters.