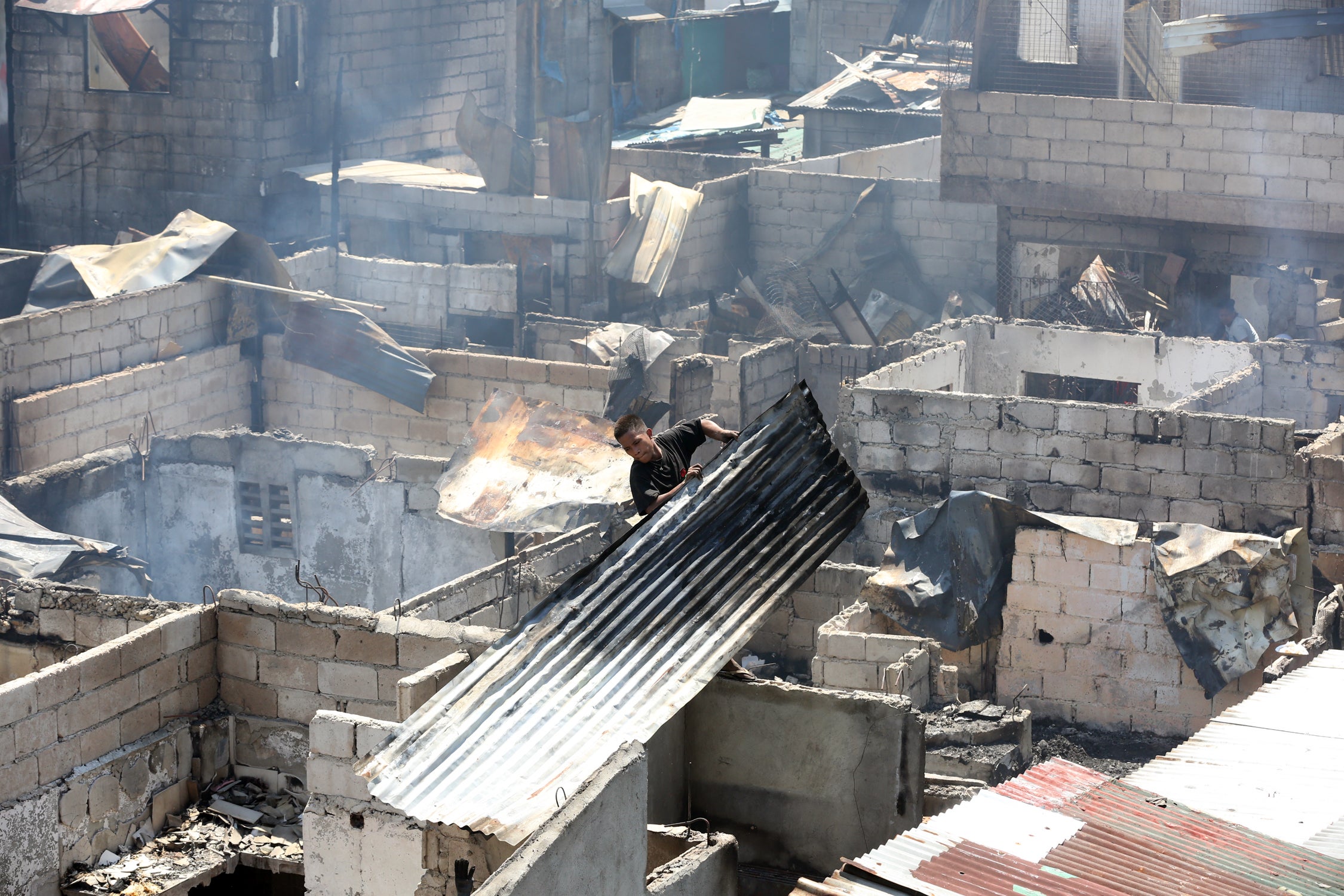 AFTERMATH A man starts looking for salvageable items from the still smoking remains of his house, one of the 50 destroyed in a fire at Barangay Tonsuya, Malabon City, on Thursday. —NIÑO JESUS ORBETA

Just a few days into Fire Prevention Month, a blaze destroyed 50 houses in Malabon City before dawn on Thursday, leaving around 150 families homeless.

Three people were injured, including a fire volunteer, and sought treatment for second degree burns and heat exhaustion.

According to reports, the fire started on the second floor of Lita Quitlong’s house in Barangay Tonsuya at 3:12 a.m. and quickly reached the fourth alarm in less than 30 minutes.

Fire responders said that according to neighbors, the blaze could have started from a candle as there was no electricity in the house at that time.

One of those injured in the incident also reported that the occupants were overheard arguing before flames were seen eating up the structure. However, authorities could not confirm whether the altercation might have led to the blaze that raged for nearly three hours.

The witness also noticed that the occupants did not seem to panic nor did they call for help when the fire broke out, a behavior described as “peculiar.”

“When we were conducting [the] initial investigation, we could not locate the tenants. The owner also could not give us any helpful information since she was not staying inside the house when the fire happened,” said Supt. Michael Uy, Malabon fire marshal.

Uy added that the surrounding houses were also made of light materials, so the flames immediately spread and damaged around P1.5 million worth of property.

The Bureau of Fire Protection-Malabon declared the fire out at 6:03 a.m. Investigators were looking into reports that it might have been set deliberately.

ADVERTISEMENT
Read Next
Lawmakers bicker over ‘pork barrel’ in budget
EDITORS' PICK
PH walks back, suspends VFA termination ‘upon the President’s instruction’
Leveling up your ‘lutong bahay’ with the kitchen companion you never knew you needed
PH COVID-19 cases near 19K mark, as recoveries breach 4,000
South Korea clamps down again as virus rebounds
Cherry Mobile teams up with Cloud Panda PH, launches online store
San Juan City to launch pop-up bike lanes
MOST READ
PH walks back, suspends VFA termination ‘upon the President’s instruction’
Calida ‘just the lawyer, not the client’ and must ‘never lose his cool’ – Macalintal
Over 30 health workers felled or sickened by COVID-19 got no aid from ‘Bayanihan’ Act
7 members of nurse’s family in Laguna catch COVID-19
Don't miss out on the latest news and information.