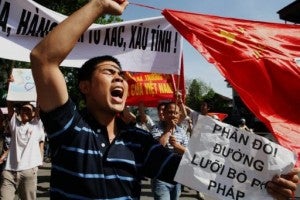 SINGAPORE—The Philippines and Vietnam on Sunday criticized recent Chinese military activity in the South China Sea amid fears that small confrontations in disputed areas could lead to armed conflict.

“Such a sense of insecurity also results when ordinary fishermen are warned by foreign vessels prompting them to leave the area,” he said.

Gazmin’s remarks came after Manila on Saturday accused China of undermining peace and stability in Asia by allegedly sending naval vessels to intimidate rival claimants in the disputed Spratly Islands.

Manila cited incidents from February to May when the Chinese Navy allegedly opened fire on Filipino fishermen, intimidated a Philippine oil exploration ship and put posts and a buoy in Philippines-claimed areas in the Spratlys.

Manila has also queried Beijing over plans reported in Chinese state media to install an oil rig in the area.

Gazmin said that “insecurity is generated when materials for possibly constructing certain structures are found in areas where a declaration has been made to refrain from putting up such kinds of structure or infrastructure.”

Liang earlier Sunday told the forum that China was committed to “peace and stability” in the South China Sea.

“I know many people tend to believe that with the growth of China’s economy, China will become a military threat,” said Liang, the first Chinese defense minister to attend the annual conference, called the Shangri-La Dialogue.

“I would like to say that it is not our option,” he said, adding that China would never “seek hegemony” or threaten any country.

In a 45-minute speech followed by a question-and-answer session, Liang warned that countries “should not engage in any alliance targeting a third party” but did not go into detail.

On the sidelines of the forum, Liang held talks with outgoing US Defense Secretary Robert Gates on Friday, a meeting both sides described as positive.

Gates left on Saturday for Afghanistan after delivering a speech warning of the danger of armed conflict in the South China Sea unless nations with conflicting claims adopt a mechanism to settle disputes peacefully.

After long-running tensions sparked by issues such as US arm sales to Taiwan, Liang said on Sunday that “the picture of the bilateral relations between China and the United States is a good one.”

“I believe all of us are very optimistic about the future of bilateral and military-to-military relations,” he added.

The Spratly and Paracel archipelagos, believed to hold major oil and gas reserves, are claimed in whole or in part by Brunei, China, Malaysia, the Philippines, Taiwan and Vietnam.

Vietnam’s Defense Minister Phung Quang Thanh told the Singapore meeting that “we expect China to honor the policies that they announced” and expressed hope that the statements “translate into reality.”

“I fully propose that we must exercise restraint and patience and commitment to solve these issues, these differences, by peaceful means. We must strictly observe the DOC,” he said.

The Vietnamese general was referring to the Declaration on the Conduct of Parties in the South China Sea, a pact signed in 2002 by China and the 10-member Association of Southeast Asian Nations (Asean).

Hundreds of demonstrators gathered on Sunday in Vietnam’s capital, Hanoi, in a rare protest demanding that China stay out of their waters following a spat involving a Vietnamese oil-drilling research boat in the South China Sea.

The group of mostly young people demonstrated in front of the Chinese embassy, many wearing Vietnamese flag T-shirts and carrying signs that read, “Stop Chinese invasion of Vietnam’s islands.” After about 30 minutes, they were dispersed by police.

The protests follow a May 26 incident when a Chinese patrol boat allegedly destroyed the cable on a state-owned PetroVietnam boat conducting seismic research some 120 nautical miles off Vietnam’s central coast.

Clashes are common in disputed areas of the sea claimed by both countries, but Hanoi has responded feverishly to this incident, saying it occurred well within the 200 nautical miles guaranteed to Vietnam as an exclusive economic zone by international law.

China has accused Vietnam of undermining its interests and rights within its waters.

“It is neither a disputed area nor is it an area managed by China,” foreign ministry spokesperson Nguyen Phuong Nga said recently in response to China’s statement about the incident.

“China has deliberately misled the public into thinking that it is a disputed area,” the spokesperson added.

A number of stories have been published in state-run media blasting the incident as an attack against Vietnam’s sovereignty and accusing China of increasing regional tensions.

Several well-known scholars have called on Vietnam to take the case to the United Nations. Reports from AFP, AP and Reuters