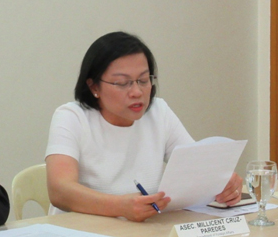 MANILA, Philippines — The confirmation of Philippine ambassador to the Kingdom of Thailand Millicent Cruz-Paredes, who is  holding two ranks, has been derailed at the Commission on Appointments  (CA).

Senator Panfilo Lacson and San Juan Representative Ronaldo Zamora were puzzled how Paredes would get confirmation since her appointment papers showed she was appointed to the ranks of Chief of Mission 1 and 2.

“I have no problem about her patriotism, her qualifications, your background is completely qualified,” Zamora said during  the hearing of the CA’s committee on foreign affairs on Wednesday.

Zamora then moved to defer consideration on Cruz-Paredes’ appointments pending clarification on the issue.

“That’s in effect demoting her,” the senator pointed out.

Paredes’ confirmation was the only one deferred by the panel as it recommended for confirmation the 24 other officials of the Department of Foreign Affairs.

All 24 officials, along with  five senior military officers, were later confirmed at the CA plenary.