MANILA, Philippines — Arrested San Juan City hostage-taker Alchie Paray on Wednesday denied insinuations that policemen planted illegal drugs on him when he was arrested for holding at gunpoint around 30 hostages at a mall in Greenhills Shopping Center.

In a video shared by the Eastern Police District, Paray, 40, said authorities were just putting handcuffs on him when they tackled him down after letting go of the hostages. 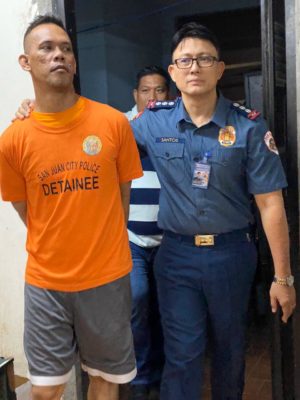 (For me, I will surely say that it wasn’t the case. They might have misinterpreted or mislook what they are putting on me. But the real thing is they just placed the handcuffs on me.)

(The case is really what has been the truth, no more, no less… It was not indicated in the case against me about possession of illegal drugs. Nothing.)

The hostage crisis, which lasted for over 10 hours, ended peacefully when Paray, a former security guard in the mall, walked out of the premises and freed his captives. He then faced the media for several minutes and voiced his grievances against his former superiors before police tackled and subdued him.