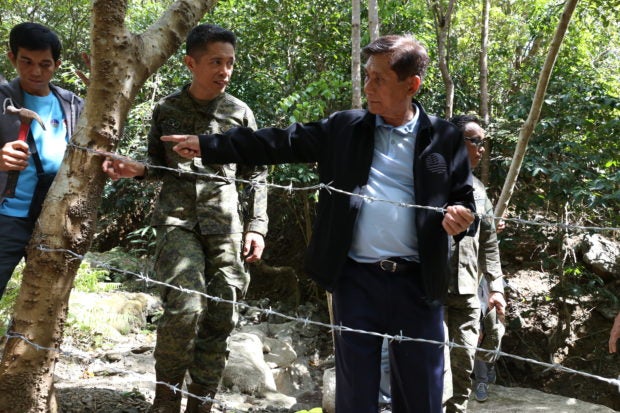 Environment Secretary Roy Cimatu visits the Masungi Georeserve in Rizal on Tuesday, March 3, 2020, and finds that a quarry company fenced off 500 hectares of land consisting of a government conservation area. Photo courtesy of the DENR

MANILA, Philippines — A quarry company that reportedly encroaching on the Masungi Georeserve–a conservation area in Baras, Rizal–is facing revocation of its permit or even closure after it was found occupying a huge part of a government forestland, said the Department of Environment and Natural Resources (DENR).

In a statement on Tuesday, Environment Secretary Roy Cimatu also instructed the Mines and Geosciences Bureau (MGB) to look into the mineral production sharing agreement (MPSA) of the quarrying firm, identified as Rapid City Realty and Development Corp.

The agreement was granted to the company by the DENR back in 1998.

The Masungi Georeserve Foundation, the governing body for the ecotourism and conservation of the site, previously sought help from the DENR after it found that 500 hectares of the area was fenced off using a series of barbed wires.

The Masungi Georeserve is known to feature limestone formations and hosts to more than 400 wildlife species. It has also become an ecotourism site, where it features several trails for hikers.

The DENR chief, as well as other environment officials, visited the area on Tuesday to verify reports of the encroached area.

Cimatu said that the MPSA of Rapid City will soon expire and is subject to renewal. He then assumed that the fencing off of the forestland was intended for the company’s expansion.

An MPSA has a validity of 25 years from the time that it was granted, Cimatu said.

“The company’s MPSA is due for renewal that’s why it is expanding. I’m sure it would seek an extension of the MPSA, but I will not allow anymore extension here,” the DENR secretary said.

“In fact, I’m even considering the closure of this MPSA. There is no such thing that we will allow a mining company—either metallic or non-metallic—to have mining operations in this area,” he added.

The DENR secretary also instructed Rizal Provincial Environment and Natural Resources Officer Isidro Mercado to expedite the establishment of a satellite office in the Masungi Georeserve, which will serve for the “protection of the nature park and surrounding protected areas.”

Meanwhile, Cimatu also instructed his personnel to look into the mineral production sharing deals of two other firms–Quarry Rock Group Inc. and Quimson Limestone Inc–that, along with Rapid City, are operating within the Upper Marikina River Basin Protected Landscape using the agreements they secured in the late 1990s.