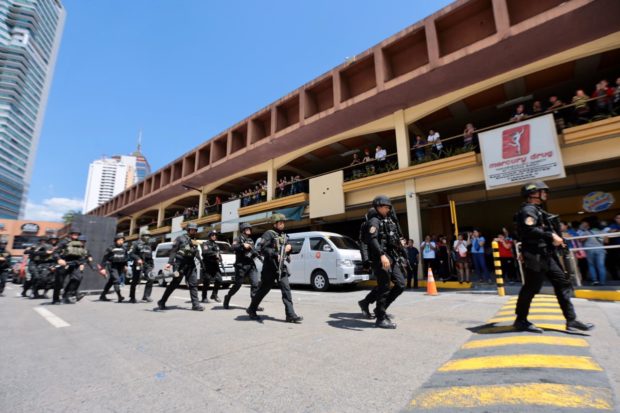 MANILA, Philippines — A person was hurt as dozens were taken hostage allegedly by a dismissed security guard inside a mall in Greenhills, San Juan City, on Monday.

Sketchy details indicate that the hostage-taker seized the administration office of the mall and held captive about 30 people there.

A police report, however, identified the suspect as Alchie Paray and the victim as Ronald Velita, a security guard.

San Juan City Mayor Francis Zamora said the suspect fired at the victim upon entering the mall around 10 a.m. The injured person was rushed to a nearby hospital and now in stable condition, he added.

According to Zamora, the pistol-carrying hostage-taker was fired from his job and demanding to speak with his former colleagues via video call.

(He went AWOL. He’s been absent for several weeks. So, it looks like there’s an issue regarding his work as security guard but we’re still looking into it.)

He added that Paray even encouraged his former colleagues to join him but no one wanted to participate.

(He was hurt when he was fired as a security guard so he decided to go here at the shopping center.)

A negotiator is already talking to the suspect inside the mall.

Employees and shoppers were already evacuated from the mall, which has been placed on lockdown since before noon.