Palace: No closure of schools over virus 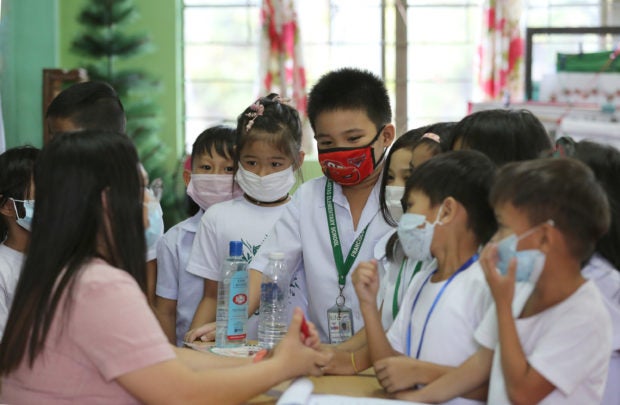 NO IMMEDIATE NEED: Schools will remain open despite the risk posed by the novel coronavirus. There are only a few weeks left in the current school term. (Photo by JOAN BONDOC / Philippine Daily Inquirer)

MANILA, Philippines — The government sees no need to undertake drastic measures like shutting down schools to curb the spread of the novel coronavirus, or COVID-19.

Presidential spokesperson Salvador Panelo said the country would not be following Japan’s example although President Duterte might adopt a similar tact if the Inter-Agency Task Force on Emerging Infectious Diseases would make the same recommendation.

“It really depends. If the President sees that there is [a] danger and the interagency has recommended it, then we will also do that. But for now, there’s no need for it,” Panelo said in a radio interview on Sunday.

This was after a female tour bus guide tested positive for COVID-19 for the second time in Osaka, the first such incident in the country.

A World Health Organization (WHO) report said that as of Saturday, Japan had 230 cases of COVID-19 infections, with five deaths.

On the other hand, the Philippines has three confirmed cases, with one death. All of the infected persons were from Wuhan, China, where the virus originated.

Over the weekend, WHO escalated the risk assessment of the virus to “very high” across the world.

Despite this pronouncement, the Palace assured the public that the government’s health protocols were “well-placed” with the interagency task force regularly reassessing the situation.

“The interagency task force regularly meets, depends on what WHO will say. Whatever their findings are, they act appropriately and we have well-placed protocols there,” Panelo said.

He added that WHO even cited the Philippines as among nine nations that had not reported a new case for more than two weeks, proof that the virus “[could] be contained.”

Part of the containment measures imposed by the government was an entry ban on foreigners from China, Hong Kong and Macau where COVID-19 cases had first been reported.

While Filipinos working in Hong Kong and Macau have been allowed to return to these countries, travel to China and its special administrative regions remain banned.

Last week, the interagency task force also implemented a selective travel ban on travelers from North Gyeongsang province, including the city of Daegu, in South Korea.

Filipinos were also banned from going to South Korea, which has 3,150 cases and 17 deaths.

Cabinet Secretary Karlo Nograles said the interagency task force was also studying the possibility of expanding the travel ban to Japan, Italy and Iran given the high number of COVID-19 cases there.

Health Secretary Francisco Duque III earlier told reporters that in the last few weeks, they have seen a steady decline in the number of persons being observed for the disease.

As of Saturday, only 33 remain hospitalized, while 591 have already been discharged.

“We have an increasing number of negative [cases], and hopefully that trend continues. So far, the way it is, our preparedness, readiness are adequate,” he said.