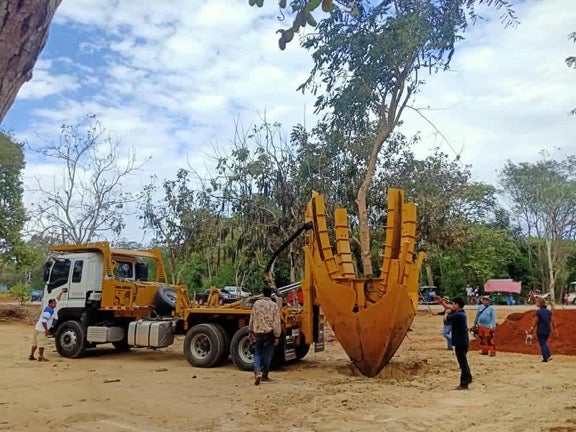 RISING SOON “Balayong” trees were uprooted and replanted along the roads of the 73,461-square-meter Balayong Park to make them part of a regreening project of Puerto Princesa City. —PHOTO COURTESY OF CITY INFORMATION OFFICE

PUERTO PRINCESA CITY—Earth-balled “balayong” (Cassia nodosa) trees that were saved from a road-widening project were replanted at a 73,461-square-meter park that could become the local version of the famous Sakura park of Japan.

Mayor Lucilo Bayron had envisioned the park at Barangay Tiniguiban here as another tourist destination that would show the city’s “strong commitment to green and organic architecture.”

“Instead of planting exotic tree species, why not plant native species that we can call our own?” Bayron said.

Balayong trees, which are usually in full bloom from February to May, are considered Palawan’s cherry blossoms, although some botanists say they are an introduced species.

The trees, which bear light pink and white blossoms, take up to five years before they are considered full-grown.

The P250-million balayong park project was first introduced in 2016. It was designed to house restaurants with a view deck, recreational and children’s parks, a food complex, a museum and library, and an artists’ pavilion, among other facilities.

Since 2005, the city government has been hosting the annual Balayong Festival on March 4 as part of the celebration of the city’s founding anniversary. —ROMAR MIRANDA