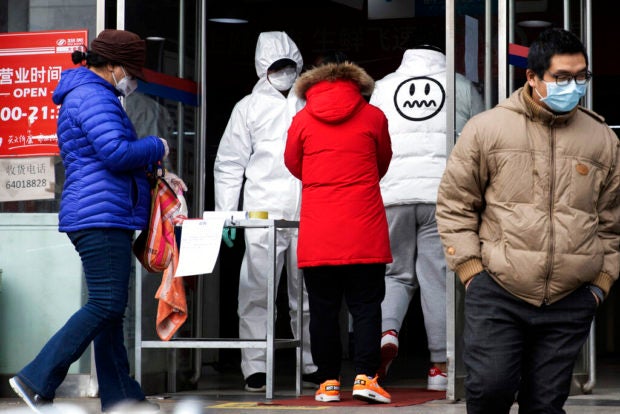 A worker in overalls screen for fever at the entrance to a supermarket in Beijing Thursday, Feb. 27, 2020. South Korea and China each reported hundreds more virus cases Thursday as the new illness persists in the worst-hit areas and spreads beyond borders. (AP Photo/Ng Han Guan)

BEIJING — Small, mostly private companies that are the engine of China’s economy are back to operating at one-third of normal levels after anti-virus controls shut factories, shops and restaurants, regulators said Thursday, and they promised more low-cost loans and other aid.

The ruling Communist Party has ordered areas that are at lower disease risk to revive manufacturing and other businesses that have been shut for a month. That comes at a time when outbreaks in South Korea, Italy and Iran are leading to travel bans and other controls abroad.

At a news conference, officials expressed confidence China’s 18 million small and medium-size enterprises are recovering quickly. The category includes most of the privately owned restaurants, factories, stores and other companies that generate its new jobs and wealth.

Activity overall is back to 33% of normal levels, while manufacturing reached 43%, said an official of the Cabinet’s planning agency, Zhang Kejian, at a news conference. He said activity was increasing by about 1% per day.

Beijing imposed the most sweeping anti-disease controls ever attempted after the virus emerged in the central city of Wuhan in December.

Most access to Wuhan was suspended Jan. 23. The Lunar New Year holiday was extended to keep factories and offices closed. Restaurants and cinemas were shuttered and the government told millions of people to stay at home. It is unclear how many might have close for good, unable to pay rent and other expenses without revenue.

“Many companies want to resume work as soon as possible,” said Zhang. “But they also worry about risks due to the spread of the epidemic. There is a dilemma.”

Forecasters say automakers and other manufacturers won’t return to normal production until at least mid-March. Auto and other sales are expected to rebound, but tourism and other service industries might not be able to recover lost sales.

Beijing has promised tax breaks and low-interest loans. Economists caution that aid alone won’t solve all their problems because travel curbs and other controls still in place have disrupted shipments of goods and kept employees from getting back to work.

Global automakers are reopening factories but say the pace will depend on how quickly they can get components.

Other officials earlier gave higher operating levels of up to 70% for steel mills and manufacturing in export-oriented coastal areas. That reflected the gap between more prosperous state industry and coastal provinces and companies in lower-income regions.

Many factories in Hubei, the inland province where Wuhan is located, are still closed. Wuhan, a city of 11 million people, is a center for automakers and suppliers of components for smartphones and other products.

The government said earlier more than 1,000 companies have received low-interest loans from a 300 billion yuan ($42 billion) recovery fund set up by the central bank.

Banks that have lent as much as they are allowed will be helped to replenish their capital to “further promote the development of the real economy,” said a central bank vice president, Liu Guoqiang.