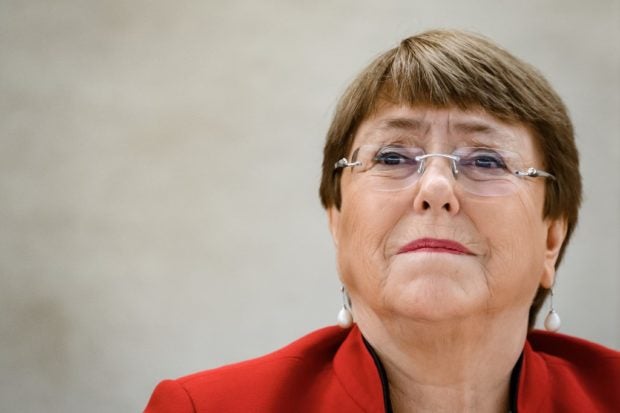 GENEVA, Switzerland — A team preparing for UN rights chief Michelle Bachelet’s possible visit to the tightly controlled Muslim-majority Chinese region of Xinjiang this year should be given “unfettered access,” she said on Thursday.

In a speech in Geneva, Bachelet welcomed the invitation from China to tour the region but added: “We will continue to request unfettered access for an advance team in preparation for this proposed visit.”

“We will seek to analyze in depth the human rights situation in China, including the situation of members of the Uighur minority,” she said, addressing the UN Human Rights Council.

China has come under international criticism for its treatment of the Uighurs, with activists and witnesses saying it is trying to forcibly integrate the mostly Muslim ethnic group and strip them of their Islamic heritage.

Beijing has described internment camps in which an estimated one million Uighurs and other mostly Muslim ethnic Turkic minorities have been held as educational.

China’s Ambassador to the UN, Chen Xu, on Wednesday dismissed abuse allegations as “unacceptable” and said there had been “economic, social and human rights progress in Xinjiang.”

“We are looking forward to the visit of the High Commissioner Mrs Bachelet to China, including to Xinjiang, this year, and we are working closely with her office on detailed arrangements for her visit,” he said.

Bachelet first asked Beijing in December 2018 for permission to carry out a fact-finding mission in Xinjiang.

Beijing has previously said it would welcome UN officials to Xinjiang on the condition that they stay out of the country’s internal affairs.

The UN rights chief typically only undertakes national visits provided the host government offers guarantees on certain conditions, including unfettered access to key sites and the right to speak with activists.